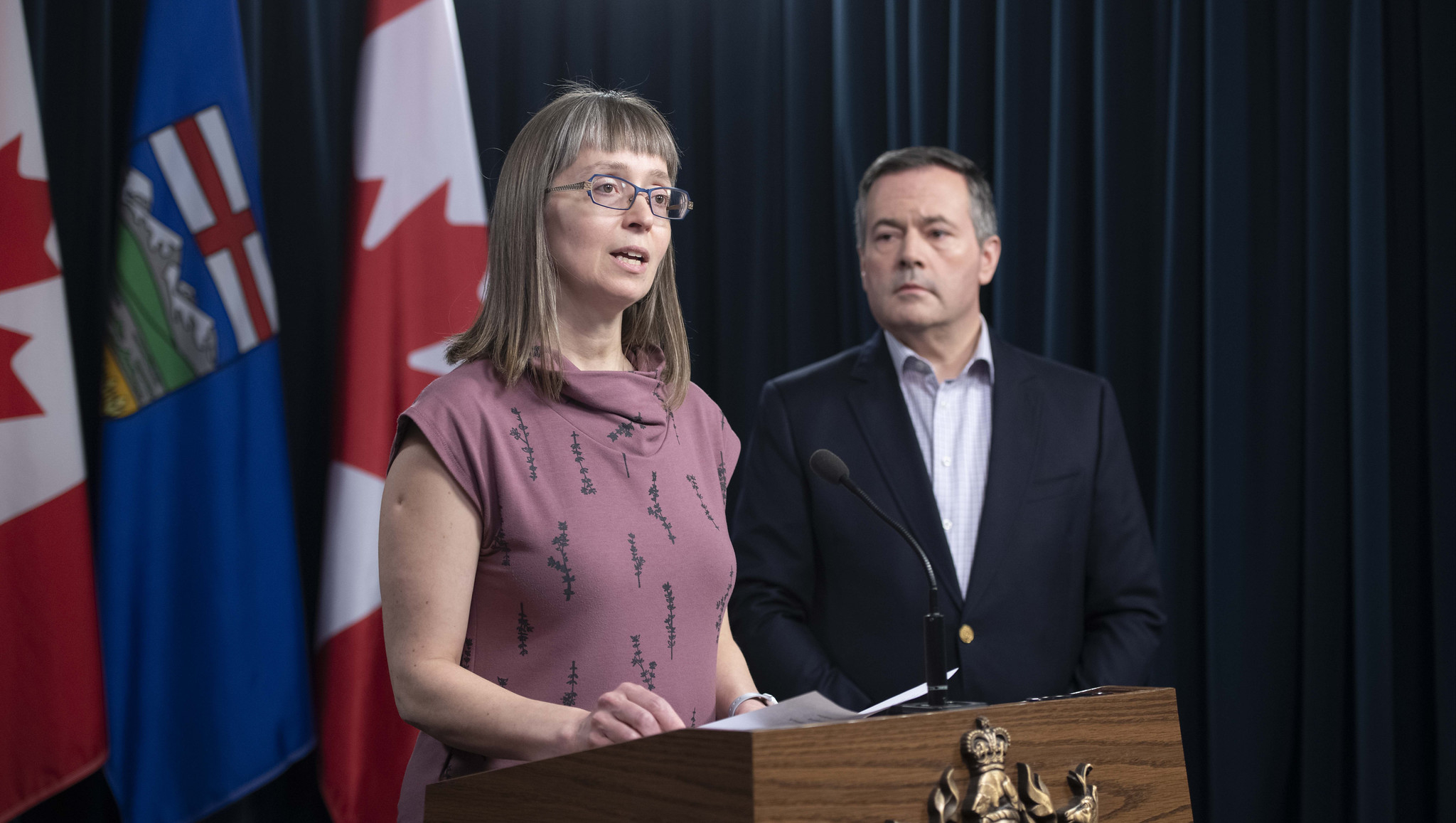 In the early days of the pandemic, Jason Kenney compared COVID-19 to an “influenza.”

Now, it seems, Alberta’s official policy will be to treat it like one. Effective immediately, those who are close contacts of someone testing positive for COVID-19 won’t have to isolate, and contact tracers will no longer tell people if they’ve been exposed to the virus. Come Aug. 16, isolation hotels and other quarantine supports will be discontinued, and the provincial masking mandate for transit, taxis and ride-share vehicles will also lift. Alberta’s so-called “best summer ever” will apparently wrap up with a full return to the pre-COVID normal.

This full-steam-ahead strategy hasn’t been tried anywhere else in Canada. It won’t be replicated in Ontario, where Solicitor General Sylvia Jones told the Globe and Mail that “we are going to continue with the pathway that keeps the vast majority of Ontario citizens safe.” In the United States, meanwhile, the Centers for Disease Control and Prevention updated its guidance to recommend that everyone, vaccinated or not, should wear a mask indoors in places where the virus is spreading rapidly. That’s because of the Delta variant, which a leaked internal document from the CDC described as being as infectious as chickenpox.

The good news is that vaccines appear to be mitigating the worst outcomes from this new variant, which means fewer deaths and hospitalizations. But Alberta, a province with some of the lowest vaccination rates in the country, seems like the wrong place to be pursuing such an aggressive strategy. “With 25 per cent of the population over the age of 12 not immunized, we have a lot of kindling, and we have a Delta variant which burns very hot,” former Alberta chief medical officer of health James Talbot said in a recent interview. “That’s not good when you combine it with the fourth wave.”

Then again, as Calgary Mayor Naheed Nenshi noted, you can’t have a fourth wave if you eliminate the ability to identify it. “Lifting restrictions on people is one thing. But lifting basic public health measures like asking people who test positive to isolate and then not testing anymore strikes me as — I just need to understand the rationale there,” Nenshi said. “I guess it means we’re not going to have a fourth wave because we won’t know, because we’re not testing.”

This squares with the United Conservative Party’s approach to the pandemic, which has always erred on the side of leaping before looking. But according to Health Minister Tyler Shandro, its latest decision to roll the dice came straight from the desk of Dr. Deena Hinshaw, the province’s chief medical officer of health. “I am deferential to the independence and credibility of Dr. Hinshaw and her work,” he said in a Wednesday press conference. When asked whether the direction to move from a pandemic to endemic stage came from his government or Alberta’s chief medical officer of health, Shandro was clear it “came from Dr. Hinshaw.” Clearly, when it comes to the Kenney government’s latest COVID-19 gamble, the buck is going to stop somewhere else.

But despite having this decision laid at her feet, Hinshaw is not as independent as Shandro might want people to believe. She serves an advisory role to the cabinet he sits in, and his party voted down a motion last fall that would have made her an independent officer of the legislative assembly. As Lorian Hardcastle and Ubaka Ogbogu (law professors at the University of Calgary and University of Alberta) wrote in a June op-ed, “the political reality is that while the government is content to have the CMOH serve as the spokeswoman for their political decisions and to expand her legal authority accordingly, they are simultaneously foisting her into an advisory role where they dictate the contents of the orders that bear her signature.”

For her part, Dr. Deena Hinshaw faces an unpleasant choice: Resign now or risk being made to wear this later if it goes sideways, writes columnist @maxfawcett. #COVID #Alberta #UCP

Nonetheless, Hinshaw seems more than happy to defend her most recent orders. In an interview with the CBC’s Jim Brown, she suggested it was time to start focusing on other risks to public health. “We knew that we wouldn’t be able to continue to test everyone with just a mild illness, just a mild sniffle, that just wouldn’t be possible because there’s going to be so many more viruses out there.” She also traded in the premier’s comparison between COVID-19 and the flu. “It’s important to remember that COVID-19 isn’t the only risk our kids face. For children under 12, COVID-19 infection is equivalent to, or even possibly slightly less risky, than seasonal influenza.”

The difference, of course, is that children under 12 can be immunized against the flu. And if the Kenney government is concerned about the dangers posed by the flu to children, they could extend the masking mandate in schools for the duration of the fall. But the health and safety of Alberta’s children seems secondary to the government’s desire to get back to business as usual, whatever the cost.

For her part, Dr. Hinshaw faces an unpleasant choice: resign now or risk being made to wear this later if it goes sideways. After all, the government has clearly decided to place her in front of the COVID-19 bus. It’s up to her to decide whether she wants to step out of its way or not.

Who else in recent memory

Who else in recent memory claimed that high COVID numbers were a consequence of too much testing? No test, no trace, no isolate? Calgary Stampede 2021 becomes practically a COVID-free event. Albertans (and visitors from other provinces) will never know the full impact of Kenney continuing to roll the dice. And true to form, Kenney refuses to take any responsibility for what had to have been a cabinet decision since Dr. Hinshaw does not dictate policy to the Premier or Health Minister, yet he would have us believe the tail does indeed wag the dog. I find it hard to believe Dr. Hinshaw is anything other than a patsy, but given what so many other health professionals are saying, it’s baffling why she would play along. Sadly, at this juncture her credibility is really no better than Jason Kenney’s or Tyler Shandro’s.

Albertins will have to take

Albertins will have to take their lumps, but when they seek to impose their insanity on the rest of society, I think we have to draw the line. They are undoing everything every other jurisdiction is doing to protect their citizenry. Set up roadblocks at all Alberta borders, and impose the same restrictions on Albertans who wish to travel as we impose on the rest of the world - you can come in if you are double vaccinated, (and can prove it), have had a negative COVID test within the previous 48 hours, and aren't going to pose a hazard to our own citizens. And if you can't prove you aren't a danger, you will have to quarantine - supervised - for 14 days. And, obviously the same restrictions must apply to other means of transportation. The Maritimes have been singulary successful in preventing spread of COVID, basically by rigid control of importation. And this has been the mainstay of control of pandemics as far back as the middle ages.

When people are sick and in

It is indeed remarkably nutty

It is indeed remarkably nutty for Kenney (I’m convinced Dr Hinshaw was pressured by the politicians in government to recommend this non-strategy) to announce Alberta is currently moving past Covid (like Cnut commanding the tide to do his bidding) when the hospitalization counts will publicly register actual Covid cases.

It is nutty not simply from an epidemiological standpoint, but also from a partisan political one. As with the crazy tRumpublicans, the truth or lies about Covid (as with just about any issue down in the US nowadays) is immaterial. What’s more important for Kenney is he prove his loyalty to climate-change and Covid deniers, and they signal it back to him. It’s nutty because, although there’s no denying Kenney’s UCP is trailing in popularity polls and he really must prioritize keeping his base happy, it still doesn’t seem sufficient to recover enough popularity before the next election in less than two years time. Epidemiologically speaking, if his base remains as reluctant to get vaccinated as they are today, there will likely be less of them when election day rolls around.

It’s a measure of what a pickle Kenney and his rookie party are in—damned if he does, damned if he doesn’t. Too bad Albertans will suffer because of the UCP’s political games.

Meanwhile, as Covid continues to kill Albertans and bump non-Covid patients from their scheduled procedures, it is also quite unlikely bitumen prices are going to recover to allow the province to reverse unpopular belt-tightening measures necessitated partly by the UCP’s ineptitude.

Kenney and his followers an virtue signal all they want amongst each other in their circled wagon laager, but it doesn’t much look like they’ll avoid a serious drubbing at the hands of voters. But it