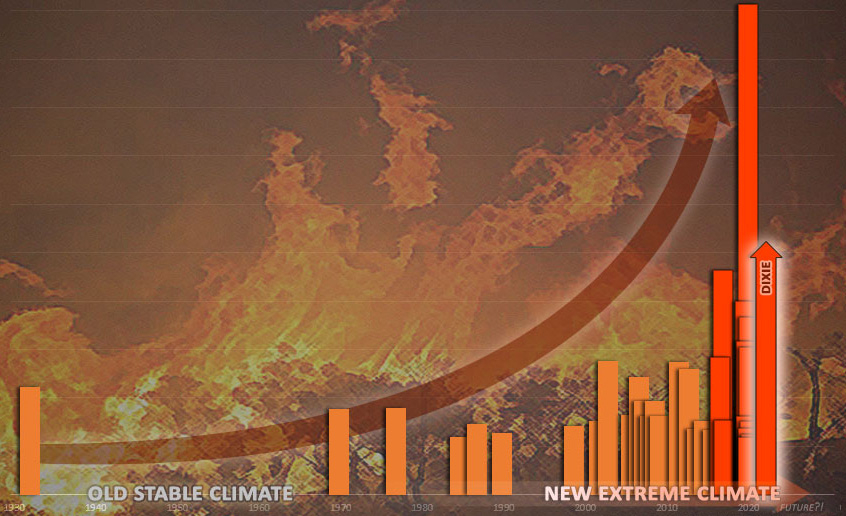 In total, the Dixie Fire has burned over half a million acres and a thousand buildings. It is still raging away at less than one-third contained. Chart by Barry Saxifrage, NationalObserver.com, August 2021.
Previous story

The Dixie Fire is the latest town-eating megafire in California's accelerating wildfire crisis.

The hot, dry conditions are so extreme this year that Dixie was able to torch 157,000 acres in just two days last week — shrugging off the co-ordinated fight by more than 5,000 firefighters and hundreds of firefighting vehicles to rein it in. That two-day burn alone would rank as one of the state's 25 largest fires on record.

In total, the Dixie Fire has burned over half a million acres and a thousand buildings. It is still raging away at less than one-third contained. Already it is California's largest individual fire in history and ranks second overall to last year's gigantic August Complex of merged wildfires.

To illustrate how Dixie fits into the state's accelerating megafire trend, I searched through decades of fire archives to create the chart below. It shows the size of California's 35 largest wildfires, arranged by the year they burned.

As you can quickly see, megafires used to be a rare crisis for Californians under our old, stable, lower-energy climate.

But as our climate has grown ever more extreme, megafires have erupted with accelerating fury and frequency. Fourteen of those top 35 wildfires burned in just the last four years — including the eight biggest recorded.

Californians have never had to deal with anything like this megafire onslaught before. Summers are now choked with toxic smoke and anxiety.

Just four years ago, I wrote about the off-the-charts Thomas Fire that exploded to become the largest fire in state history. Firefighters, politicians, and the public were shocked by the size and fury of this record-breaking fire.

Fossil fuel pollution has been searing the Golden State into a hot, dry tinderbox. The megafires have followed in accelerating fury and frequency, and carbon columnist @bsaxifrage has the charts to prove it. #Wildfires

The megafire chart I made for that article maxed out at 250,000 acres burned. For this article, I've had to stretch the same top-fire chart up to one million acres — four times higher in just four years. Take a look at this year's version below in which I've highlighted that formerly biggest-ever Thomas Fire. It's now dwarfed and lost amidst the onslaught of megafires that followed.

All this megafire mayhem is unfolding with roughly 1 C in global heating. Humans are currently planning to burn enough fossil fuels to push global heating two to three times higher during the lifetimes of today's kids.

How climate change is cooking up more megafires

Climate science documents many ways in which our human-caused global heating is turbocharging wildfires.

These include hotter nights with lower humidity that keep fires raging when they used to damp down; more extreme wind events that fan the flames; fires burning so intensely they create their own self-intensifying fire weather; and the unleashing of hordes of tree-killing insects that have decimated a "staggering" 129 million trees in California alone in just the last few years creating super-fuelled fire cores that are hard to put out.

But the most powerful climate hammer of all has been the rapid rise in days that are both hotter and drier.

A study led by researchers from McGill University is one in the long line of science reports linking climate change to rising wildfires. It focuses on this convergence of heat waves and droughts — what they call the "disastrous duo." Their research shows that these hot-dry events are becoming increasingly common and more extreme in western parts of the United States due to climate change. The study explains how these dual “hot-dry extremes” are the conditions that breed explosive and hard to contain megafires.

To illustrate this rising hot-dry trend in California, I've charted NOAA data for the average temperature and precipitation of every California wildfire season since 1895. (h/t to @RARohde)

First take a look at the grey dots. These show every year from 1895 to 1999. I've put a grey oval around them to highlight the range of years under our old, stable climate. Now compare that old range to the years since — shown as red dots. Notice how every year since 2000 has been hotter than the “old normal” — with several years jumping into record hot territory.

But even more dangerously, over half those years have also moved into record hot-dry territory. Those are the red dots shown in the upper left that are outside the climate range of the previous century. These are the years that featured extreme “disastrous duo” conditions.

This year isn't on that chart yet because we are only halfway through the traditional fire season. But as we will see in more detail below, California's forests have been hammered in 2021 by record-smashing heat and drought events.

Another recent California fire study found that “climate has been the dominant controller of wildfire activity in the Sierra Nevada region in the past 1,400 years.” Researchers from Brown University studying ash layers in old lake sediments determined that warm and dry conditions were linked to increased wildfire as far back in time as the layers went.

There is one more dangerous wildfire trend the McGill researchers uncovered.

The trigger for these “disastrous duo” hot-dry events has shifted. In our old lower-energy climate, extreme drought required an extreme lack of rain. But climate change is now fuelling heat waves so intense they are cooking up drought conditions, even when rainfall is close to normal.

A prime example of this happened this year when a fairly average winter snowpack in California failed to fill the region's reservoirs as expected. The water thief turned out to be the extreme spring heat waves that baked soils so dry the ground sucked up far more of the rain and snowmelt than in the past. That has left streams, rivers and lakes in drought conditions.

The fact that global heating is now so extreme that heat alone can cook up hot-dry megafire conditions is especially worrisome because rising temperatures are the most certain result of continued fossil fuel burning. As the new IPCC Climate Change 2021 report highlights: “Every tonne of CO₂ emissions adds to global warming.”

There have always been sparks that start fires in California, from both nature (lightning) and humans. But to turn a common small brush fire into a city-eating megafire requires a lot of kindling-dry fuel (forests, brush, grassland) that burns explosively fast. And that's exactly what increasingly extreme hot-dry conditions are serving up.

Record heat and drought this spring primed the landscape for Dixie to explode.

The three-month period leading up to Dixie — April, May and June — was the hottest on record for California.

June then capped it all off with an unprecedented climate-fuelled
"heat dome" that obliterated all-time temperature records across western North America.

It was the same heat wave that saw Lytton, B.C., hit the highest temperature ever recorded in Canada — followed the next day by an explosive wildfire that burned the town to the ground.

While the Golden State roasted under record spring heat, it was also getting dried to a crisp by record drought.

In June, 85 per cent of the state was parched in either “extreme” or “exceptional” drought conditions. That was a record for any month, in data stretching back to 1895.

As NOAA summed it up in its June climate report: “Extreme drought in the southern Cascades of northern California coinciding with the exceptional heat wave of late June came to a head with a suite of wildfire ignitions.”

When Dixie started on July 14, drought was at record levels, as shown on this map. Temperatures were searing, and the month of July would go on to become California's hottest July on record.

Another measure of just how extremely dry it is for the Dixie Fire is the water levels in California's second-largest reservoir, Lake Oroville. The upper Feather River watershed, where the Dixie Fire is still burning, is the source of water for that reservoir. Lake Oroville is currently down to just a quarter of its capacity. The water level has fallen so low that the lake's Hyatt power plant was taken offline last week for the first time in its history.

The Feather River watershed offers a sobering example of the kinds of extreme weather whiplashes that climate change delivers.

This year, it is being hammered by record heat, drought, and wildfire. But just a few years ago, in 2017, it made international headlines for too much rain.

Back then, more than a foot of rain fell in this watershed in just a few days. That deluge rapidly pushed Lake Oroville above its capacity. The flows were so extreme that dam operators were forced to use the emergency spillway for the first time ever. But then that spillway started to fail and 180,000 people had to be quickly evacuated below the dam. In the end, the spillway crumbled, but fortunately didn't fail catastrophically as feared.

The science has been clear for decades — pollution from the burning of oil, gas and coal is overheating our atmosphere and oceans. The resulting global heating crisis is striking ever more powerful hammer blows on our forests, farm fields, water systems, towns and all the other infrastructure that we built for a safer, lower-energy climate. Amazingly, we spent the last few decades knowingly destroying that calm and stable climate.

How much worse can the global heating crisis become for Californians?

Way back in 2009, then U.S. secretary of energy Steven Chu, a Nobel Prize-winning physicist, voiced his deep concerns for what business-as-usual climate changes could do his home state: “I don't think the American public has gripped in its gut what could happen …We're looking at a scenario where there's no more agriculture in California.” And, he added, “I don't actually see how they can keep their cities going.”

In the decade since his warning, global fossil fuel burning hasn't fallen as needed. Instead, it has surged to record levels, far outstripping all clean energy efforts. All that fossil fuel pollution being dumped into the air is causing the main control knob for the global climate — CO2 levels in the atmosphere — to continue accelerating upwards.

Our metastasizing climate crisis is rapidly becoming a dystopian legacy that today's adults are locking our kids and future generations into.

Sorry, the reason for colours

Thanks for catching that, Roy

But it would have been much funnier if you'd said, "Well, obviously, the red bars stand for AHHH! AHHH! AIEEE!"

Haha! I missed a perfect set

I would have a better feeling

I would have a better feeling for fire size if you used square kilometres instead of acres. We should all have a good idea of how far a kilometre is as that is the unit of distance for highway driving.

Hahahahaha ... I still translate acres into square miles, so I can understand how bit it really is.
I've not done any amount of travelling along familiar roads in decades ... so my understanding of How Big an area is, comes from before we went metric.