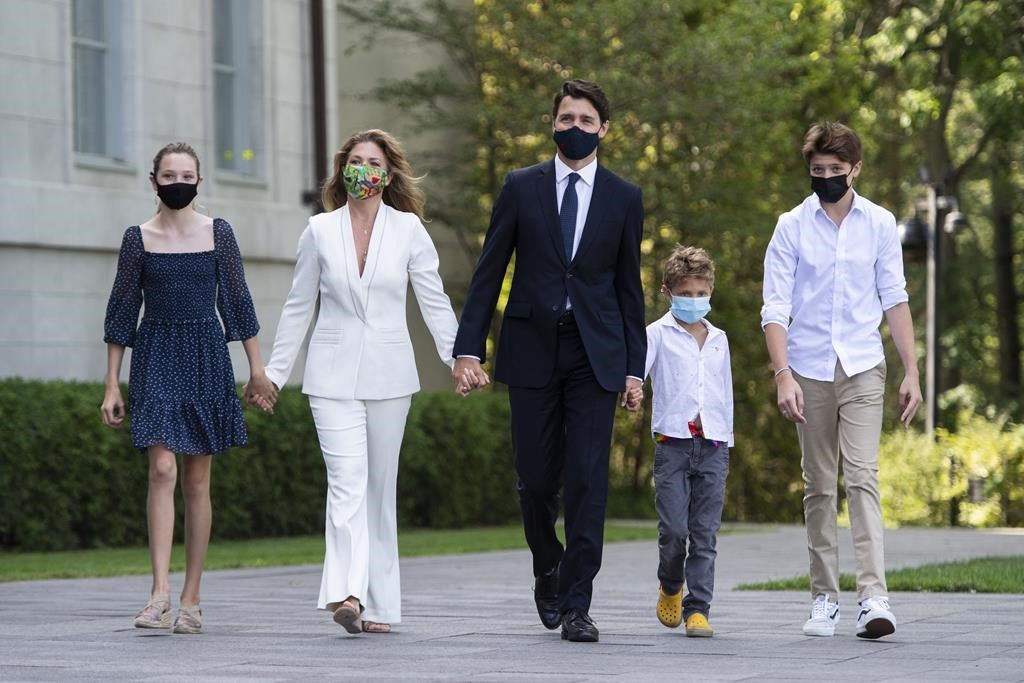 Prime Minister Justin Trudeau arrives with his wife Sophie Gregoire Trudeau and their children, Ella-Grace, Hadrien and Xavier, to meet with GG Mary Simon at Rideau Hall in Ottawa, on Aug. 15, 2021. Photo by The Canadian Press/Justin Tang
Previous story
Next story

Prime Minister Justin Trudeau pulled the plug Sunday on his minority Liberal government, arguing that Canadians deserve a say on how to finish the fight against COVID-19 and build back the shattered economy.

But opposition leaders blasted Trudeau for putting his quest for a majority ahead of the health and safety of Canadians, plunging the country into what they called an unnecessary and reckless election just as a fourth wave of the deadly coronavirus is gathering steam across the country.

Gov. Gen. Mary Simon agreed Sunday morning to Trudeau's request to dissolve Parliament for a 36-day campaign — the shortest allowed by law — that will culminate in a Sept. 20 vote.

Addressing Canadians afterwards outside Rideau Hall, Trudeau said Canada is at a pivotal moment, "maybe the most important since 1945 and certainly in our lifetimes" and Canadians need to choose how they want to proceed.

"The decisions your government makes right now will define the future your kids and grandkids will grow up in," he said.

He challenged opposition leaders to explain why they don't think Canadians deserve a say.

Trudeau's justification for going to the polls a little less than two years after the last election was greeted with skepticism. Opposition leaders pointed out that the Liberals have been able to pass pandemic relief bills, a throne speech and a budget, surviving every confidence vote along the way.

"A leader who cared about the best interests of Canadians would be straining every sinew to secure the recovery right now. Instead, Justin Trudeau has called an election," said Conservative Leader Erin O'Toole.

He touted his own five-point "Canada recovery plan" that promises, among other things, to create one million jobs and balance the federal budget in 10 years.

Launching his campaign in Montreal, NDP Leader Jagmeet Singh called it a "selfish summer election," triggered because Trudeau is "fed up" with New Democrats forcing his government to do more to financially support people hurt by the pandemic and pushing him to impose a tax on the "ultrarich."

"It was New Democrats that delivered the help that people needed," Singh said, taking credit for insisting on more generous emergency aid programs.

"Everyone across Canada benefited from New Democrats being in Ottawa and I say to folks imagine how much more we could do with more New Democrats elected."

Singh also criticized Trudeau for calling an election just as the president of Afghanistan fled the country as Taliban insurgents entered the capital, Kabul.

Trudeau, who announced Sunday that Canadian diplomatic personnel are on their way back to Canada, insisted the election campaign will not impede his government's efforts to evacuate Afghans who helped Canada's mission or to accept 20,000 refugees who've already fled Afghanistan.

The Liberals are gambling that general satisfaction with the government's handling of the pandemic — a world-leading vaccination rate and the unprecedented billions doled out in emergency aid programs — will propel them past the 170 seats needed for a majority in the 338-seat House of Commons.

However, public opinion polls suggest a majority is far from certain.

Trudeau signalled Sunday that Liberals will use the issue of mandatory vaccinations, a notion that polls suggest is hugely popular, as a wedge against the Conservatives.

As an example of the kinds of choices that Canadians need to make, he pointed to his government's decision to require mandatory vaccinations for federal public servants and workers in federally regulated sectors. He noted that Alberta Conservative MP David Yurdiga has called that "tyrannical."

But Bloc Québécois Leader Yves-Francois Blanchet accused Trudeau of contradicting himself. If the pandemic is so serious that vaccinations must be made mandatory, Blanchet said, surely it's too dangerous to call an election.

O'Toole accused Trudeau of "trying to divide people" over vaccinations. Nevertheless, he was on the defensive trying to explain why his party does not support mandatory vaccinations and won't require its candidates to be double vaccinated before they start going door-to-door or attending campaign events.

"(Vaccines) are the critical tool in turning the page on COVID-19. We have to try and encourage and have as many people as vaccinated as possible and then take reasonable precautions to use other tools to keep all Canadians safe," O'Toole said.

Late Sunday night, O'Toole released a statement proposing an alternative to mandatory vaccinations. He said a Conservative government would have unvaccinated federal employees and air passengers pass COVID-19 tests instead. He also said federal public servants who are not vaccinated would need to pass a rapid test every day.

Green Leader Annamie Paul launched her campaign emphasizing the need for urgent action on the climate crisis but she also joined the chorus denouncing Trudeau for calling an election amid the pandemic.

"We're here because the Liberals have decided that they want all the power, that they want a majority and they think that now is the best time to get it," said Paul at an event in the riding of Toronto Centre, where she is making her third attempt to win a seat in the Commons.

The election call comes days after Canada's chief public health officer, Dr. Theresa Tam, warned the country is in the midst of a fourth wave of the pandemic. Case numbers have been steadily rising in recent weeks, driven by the more contagious Delta variant.

Tam has said she believes Canadians should be able to vote safely in a pandemic election, provided public health protocols are followed.

At dissolution, the Liberals had 155 seats, the Conservatives 119, the Bloc Québécois 32, the NDP 24 and the Greens two. There were also five Independents and one vacancy.