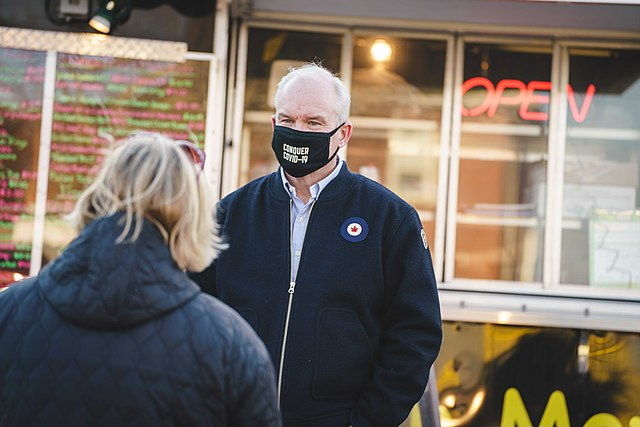 Campaigns matter. For a federal conservative party that has consistently polled at or below 30 per cent for months now, and practically begged the Prime Minister not to call an election, this is all they have to cling to now. In 2015, after all, Justin Trudeau’s Liberals entered the election in third place, and came out of it with a convincing majority government. As longtime conservative insider and former Harper adviser Ken Boessenkool tweeted earlier this week, “Campaigns matter. And O’Toole has some of the smartest campaign folks I know.”

In fairness to Boessenkool, the campaign hadn’t technically started when he said that. But the runup to it has been an unmitigated disaster for O’Toole, and raises some questions about just how smart his campaign folks really are.

On Friday, the party’s official Twitter account released a video that clumsily cast Justin Trudeau in the role of Veruca Salt from 1971’s Willy Wonka and the Chocolate Factory, a reference that isn’t exactly going to pop with anyone under the age of 50 or so. The video was so ham-fisted it drew the ire of a number of conservatives, including at least three sitting MPs and former Saskatchewan premier Brad Wall. “Please tell me — @CPC_HQ that someone hacked your account and this is not an actual ad for your party,” he tweeted.

It gets worse for the Conservatives, though, because while that ad will get mocked mercilessly on Twitter, O’Toole’s comments about mandatory vaccinations will almost certainly get replayed in radio and television spots across the country. In response to the announcement that federal public servants will have to be vaccinated, along with those working for crown corporations and other federally regulated businesses, O’Toole said "Conservatives support Canadians' right to determine their own health choices."

This is a curious contradiction for someone who says he is pro-choice but has openly courted pro-life supporters in the past, and who won the leadership thanks in large part to Derek Sloan, an avowed anti-choice politician. It’s also a puzzling political choice, given that polls have shown nearly eight in ten Canadians support the idea of mandatory vaccinations. But it’s clear that the Liberal announcement was something of a trap, and it was even clearer O’Toole was going to step in it.

Even before the new federal requirements were announced, a member of O’Toole’s own caucus blew up his position by suggesting mandatory vaccinations were “another example of the Liberals using severe government overreach for political gain.” On Tuesday, Fort McMurray MP David Yurdiga described the idea as “tyrannical”, and said "Canadians deserve the right to liberty, whether they choose to be vaccinated or not. Mandating the vaccine as a requirement to work would be the beginning of a slippery slope.” O’Toole’s response wasn’t to kick him out of caucus or disavow his position. Instead, O’Toole noted that he and his wife had taken the “unusual step” of videotaping their own vaccinations. Yurdiga then announced this weekend he is not seeking reelection due to undisclosed health issues.

In an election that seems to be purely about partisan advantage for the Liberal government, O’Toole may have just handed them a gift. As Abacus research co-founder and pollster Bruce Anderson noted on Twitter, “Conservatives excoriated Liberals over a lack of vaccines a few months ago, and today - with a Delta wave rising - oppose mandating vaccination. They say there's no need for an election, and then today they provided a reason to have one.”

There is still time for the Conservative Party of Canada to turn things around, just as there was probably time for the Titanic to avoid the iceberg. But when people tell you who they are, you should believe them. What Erin O’Toole’s Conservatives are telling Canadians here is pretty clear: they put the rights of unvaccinated people, many of whom are animated by conspiracy theories and a general indifference to the welfare of others, ahead of public safety. Don’t be surprised if the Liberals spend the rest of this campaign reminding Canadians about that. Campaigns, after all, do matter.

EIGHT(8) OUT OF TEN(10) Canadians are in favour of a vaccine passport - really? How and where is that ratio established as fact. I subscribe to Canada's National Observer because it is NOT politically supported nor (mainstream) biased... I hope N O will quickly clarify that statement.

Polling data? And if the

Polling data? And if the vaccine continues to mutate and come up with more deadly versions of itself, that number is going to grow. Anti vaccers are being revealed as rather simple thinkers, and a bit on the paranoid side as well.

I'm wondering if there might be a connection between obsessive fears of something as trustworthy as vaccines...........and a kind of paranoia that has to manufacture fantasy fears to keep the mind of the real threats.

The right wings persistent work to call global warming (something that is becoming increasingly obvious) into question, comes to mind. Perhaps its reality that scares them.

Sorry about that - both mean

Sorry about that - both mean the same fascist governance to me - I meant to quote mandatory vaccination unquote (same principle as vaccine passport in my mind).

I hope Canada will keep in

I hope Canada will keep in mind that not all unvaccinated people are anti-vaxxers.

There are still people out there who have not been vaccinated for legitimate reasons - despite all the efforts being made. Some simply cannot access the communal vaccine clinics or wait in lines at the drugstores, by reason of disability or isolation, or working odd, long hours ...among other barriers.

Too many people, anti-vaxxers or not are far too quick to squawk about their freedoms. We are all on edge, we know - even if we will not admit, that there are too many humans on board this fragile planet. and we express our fears, our insecurities by the useless gnashing of teeth and the hair trigger release of our frustrations.

Humanity is a "social" race of creatures, though one could be forgiven for doubting it these last decades. WE will not survive as a species if we do not manage to work together. Hate, ire, trash talking and violence will destroy us even quicker than pandemics or wars.

Absolutely. But irrational decisions, like O'Toole's expectation that staffers and press travelling with the conservative bus must be vaccinated, but the politicians themselves need not be..........is a killer as well.

Trying to play to all sides in an issue as important as vaccination is penny pinching at its worst. Sometimes we have to be courageous, acknowledge the science, and act on the evidence.

Trying to have it both ways is a wheedling way of undermining reality. Or as Chantell Hebert said on At Issue last night.............'vaccination if necessary but not necessarily vaccination' is a hairbrained position for a would be national leader to take.

It undermines the collective work we're going to have to learn to engage in, if we have a chance against climate disaster.....who are these fringe voters that he's trying to appease?

I will not be voting

I will not be voting Conservative however it seems to me that the intention of Mr. O'toole's statement was not to be anti-vax or anything other than to exclaim that the government should not force (by law) citizens to vaccinate. I believe he was attempting to make the point that all citizens deserve the right to choose even if it is a wrong choice they are making. He of course made a mess of things and the media, along with the other parties of course, will jump all over it. Not very crafty of Mr. O'toole.