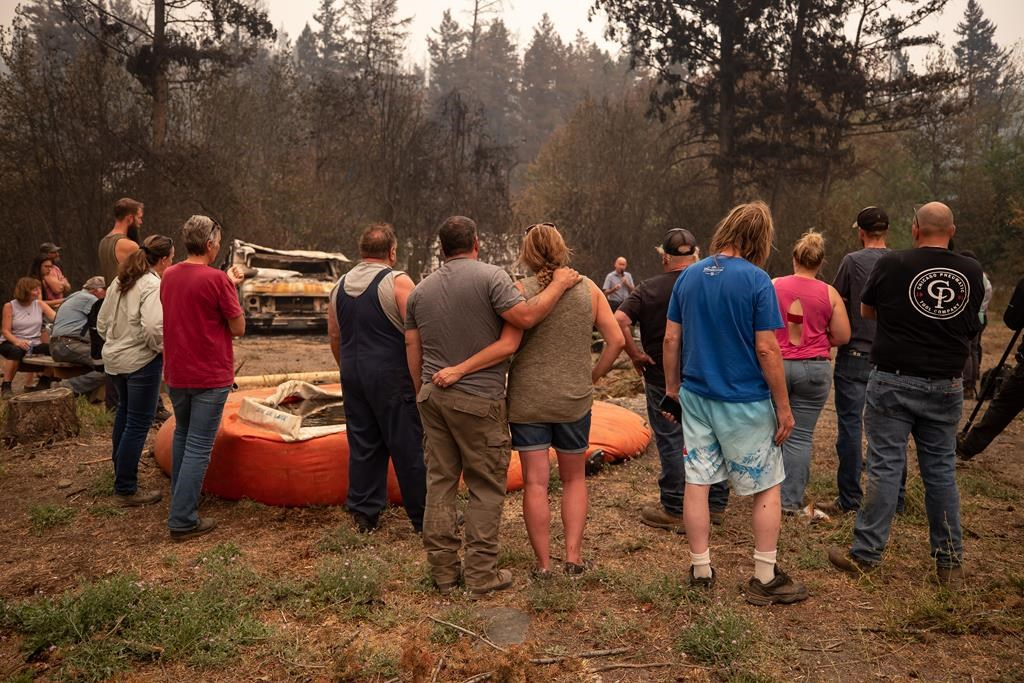 Monte Lake residents listen during an impromptu community meeting with BC MLA Ellis Ross after numerous homes in the community were destroyed by the White Rock Lake wildfire, east of Kamloops, BC, on Aug. 14, 2021. Photo by The Canadian Press/Darryl Dyck
Previous story
Next story

Some of the largest and most dangerous fires are burning in the southern Interior in the Kamloops fire centre where most of the new evacuation orders have been issued.

Andrew Roebbelen with the Thompson-Nicola Regional District said there are 29 evacuation orders affecting over 1,400 properties in the area.

There are at least a dozen wildfires in the district, including the Lytton, White Rock Lake, Tremont Creek and Sparks Lake blazes, he said.

The City of Kamloops issued an evacuation order for more than 700 properties due to the sudden growth of the Tremont Creek wildfire.

Orders to get out were issued for hundreds of properties in the Township of Spallumcheen late Sunday as the White Rock Lake fire pushed forward, said spokeswoman Lisa Gyorkos.

The same fire destroyed homes in Monte Lake and Westwold about 60 kilometres west of Spallumcheen on Aug. 4.

The City of Armstrong, with a population of about 5,000 people, has been placed on evacuation alert.

The city says in a statement that the alert is a precautionary measure due to the rapidly changing conditions of the White Rock Lake Fire.

"The fires are unpredictable in nature but remain approximately 20 kilometres from the city," the statement says.

Hundreds of properties evacuated as wind prompts growth in #BC #Wildfires.

Roebbelen said in an interview Sunday that their biggest concern was the unstable weather forecast through to Monday.

"And that can mean either good things or bad things for fire. So, precipitation would be great, right about now. But the winds, and if there's possible lightning, that would greatly impact fire growth."

The Okanagan Indian Band near Vernon, B.C., ordered residents of about 80 properties to leave immediately.

"It's been a very active evening for the BC Wildfire Service," Berg said, adding the high winds were expected to persist.

B.C.'s Ministry of Transportation said in a news release that highways may close with limited notice because of wildfire activity. It asked people to avoid non-essential travel in order to leave evacuation routes open for those escaping the flames.

There are about 270 blazes burning in B.C. More than 30 of them are wildfires of note, which means they are either highly visible or considered a danger to the public.

Berg said some of the fires that have seen significant growth include the White Rock Lake, Nk'Mip Creek and Lytton wildfires.

The White Rock Lake wildfire is estimated to be more than 620 kilometres in size and grew aggressively on both its northeast and southern flanks.

The BC Wildfire Service website said it expects "extreme" behaviour and it's assessing the situation for when flights can be resumed to start dumping water or retardant on the fires.

"At this time all air resources have been grounded," the website said.

The Lytton Creek wildfire is estimated to be about 563 square kilometres and grew "fuelled by hot and dry conditions and strong winds," said the website.

The Nk'Mip Creek wildfire, which is six kilometres north of Osoyoos jumped containment guards at the western base of Mount Baldy and is now estimated to be about 180 square kilometres.

Berg said the area burned this year so far is about seven times greater than the 10-year average.

She also warned that extreme wildfire behaviour was expected to persist.

"You could call it a blitz. We're working and continuing to respond."