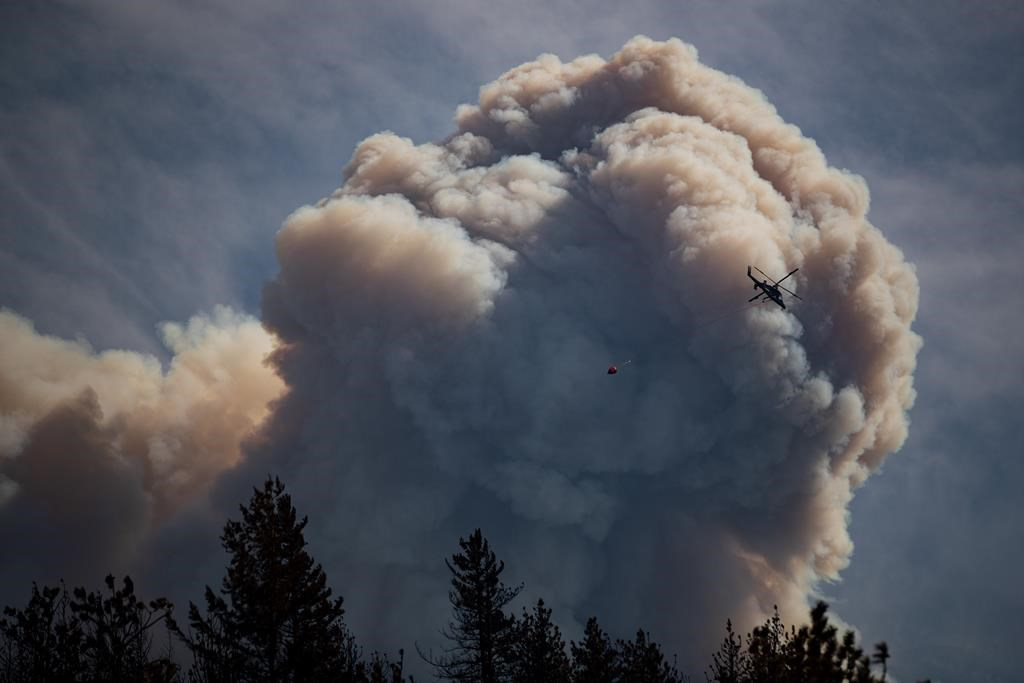 A helicopter carrying a water bucket flies past a pyrocumulus cloud, also known as a fire cloud, produced by the Lytton Creek wildfire burning in the mountains above Lytton, B.C., on Sunday, Aug. 15, 2021. File photo by The Canadian Press/Darryl Dyck
Previous story
Next story

Laura Wilson, with the Regional District of Central Okanagan, said Monday up to 60 properties may have been "significantly damaged" by the White Rock Lake wildfire.

There has also been "limited structural damage" reported because of the Mt. Law wildfire also burning in the district, she said.

"At this time, we still can't confirm that number," Wilson said. "We're just working with BC Wildfire in order to get into the area to kind of confirm those properties."

Evacuation orders also cover about 500 properties in the Glenrosa neighbourhood of West Kelowna because of the Mt. Law wildfire, while evacuation alerts are posted for many more homes in the area.

"The wildfire danger throughout much of the Interior continues to be extremely serious," he said.

"And we are in for a challenging fight in the coming days, given the conditions we're seeing in our communities and on our highways."

Rick Manwaring, the provincial deputy forests minister, said officials are "not in a position to describe the total number of structures" damaged by wildfires in B.C. this season.

He said the local governments are keeping track of the information, which he said is sensitive and changes daily.

Wind-fanned wildfire damages up to 60 properties in B.C.'s central Okanagan. #BC #Wildfires

"We haven't been tracking it on a provincial basis at this point."

"We continue to have hot and dry conditions here in the Interior B.C.," Wilson said.

"While we have a couple of days of cooler weather forecast right now, winds continue to be an issue for our crews, making fire behave very radically and actively."

The entire cities of Armstrong and Merritt are on evacuation alert, along with the community of Barriere, north of Kamloops, affecting about 14,000 residents in total. Residents of roughly 700 properties on the southwest side of Kamloops have also been told to be ready to leave as four separate wildfires are out of control in those regions.

Strong winds late Sunday fanned many of the nearly 270 fires currently burning in B.C., including more than 30 considered highly visible or a threat to life and property.

Conroy described the conditions as "some of the toughest" the province has experienced, made worse by unprecedented heat and severe drought in many areas.

"This is not a normal fire season by any measure," she said.

A news release from Emergency Management BC said there are nearly 75 evacuation orders and about 120 evacuation alerts in the province affecting thousands of people.

Environment Canada called for showers over some of the areas where the most aggressive wildfires are located on Monday, including Kamloops, Kelowna and Vernon, but forecasters say any rain could also include lightning, increasing the potential for further fires.

Ian Meier, executive director of the BC Wildfire Service, said the medium-to-short-term forecast shows cooling and a more seasonal outlook for the rest of August.

The outlook for September is similar to what was seen in August, Meier said, adding the forecast shows a possible "better reprieve in October."

"Not a lot of moisture at all, though, for the rest of August and into September."