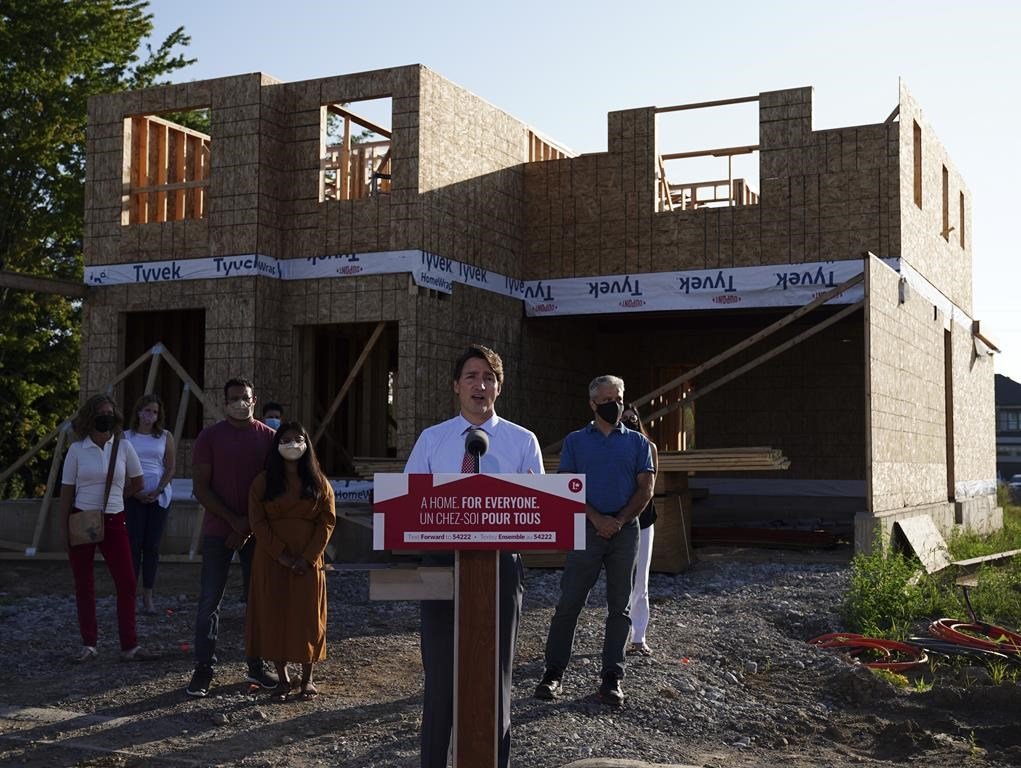 TORONTO — Liberal Leader Justin Trudeau unveiled his party's housing plan Tuesday, but real estate industry members are concerned it won't do much to alleviate a lack of supply.

Trudeau's plan, announced at a Tuesday campaign stop in Hamilton, Ont., is built around helping renters become homeowners through $1 billion in loans and grants, but also involves a two-year moratorium on foreign buyers, banning blind bidding and a Bill of Rights creating a legal right to a home inspection.

The Liberals plan to help young, first-time buyers with a new savings account allowing Canadians under 40 to save up to $40,000 toward their first home, and withdraw it tax-free to put toward their purchase, with no requirement to repay it.

The plan also includes a Housing Accelerator Fund, which would make $4 billion available for large cities to speed up their housing plans, in hopes of building 100,000 new middle-class homes by 2024-25.

"They're treating the symptom of the problem and not the real problem, which is the supply," said Ben Young, the senior vice-president of development at Southwest Properties in Halifax.

With the number of available homes failing to keep up with demand in recent years, he would like to see federal and provincial government lands opened up for development, which could boost housing inventory.

He also thinks parties should be less focused on housing tax incentives, even though he admitted they garner broad appeal, because he said they don't often help supply.

Davelle Morrison, a Toronto broker with Bosley Real Estate Ltd., thinks the Liberal's incentive for people under 40 is "nice to have," but "doesn't really move the needle."

She believes the country's housing sector would be better off if it had a 30-year amortization rate, more attention paid to Indigenous needs and more allowances for laneway housing and basement apartments.

Liberal Leader Justin Trudeau unveiled his party's housing plan Tuesday, but real estate industry members are concerned it won't do much to alleviate a lack of supply. #cdnpoli #elxn44

She also wants politicians to stop fixating on foreign buyers, whom some have blamed for driving up home prices in recent years.

"We need to stop making foreign buyers the Bogeyman and saying that everything is their fault," said Morrison, noting studies show they account for less than five per cent of homes owned in the Greater Toronto Area.

"We have had very few foreigners buying into the market because of COVID-19, and real estate prices have still climbed."

The average price of a home sold reached $662,000 in July, up 15.6 per cent from the same month last year, the Canadian Real Estate Association said earlier this month.

The average price of a Toronto home was just over $1 million in July, up 12.6 per cent compared to a year ago, the city's local board said.

As those prices climbed, bidding wars intensified, brokers complained of a lack of supply and prospective buyers felt pressure to stretch their budget and drop more cash on already expensive homes.

The Liberals want to take some of the pressure out of that process by banning blind bidding, but Morrison said open auction systems, where all parties know each others offices, have done little to cool the Australian market.

The Ontario Real Estate Association made the same observation.

"Auction fever creates a three-ring circus on front lawns, as hopeful buyers crowd in front of a home with a live auctioneer, or online, and the bidding begins," said OREA President David Oikle in a statement.

While blind bidding is often criticized because of its secrecy, Halifax broker Sandra Pike said her region differs from many others because people can readily access plenty of data to make informed offers.

Local real estate websites, she said, share when a home was listed, how many days it's been on the market, when and for what price a home was sold for and what nearby listings are priced at.

She said, "Our consumers here have all that transparency already."

This report by The Canadian Press was first published Aug. 24, 2021.