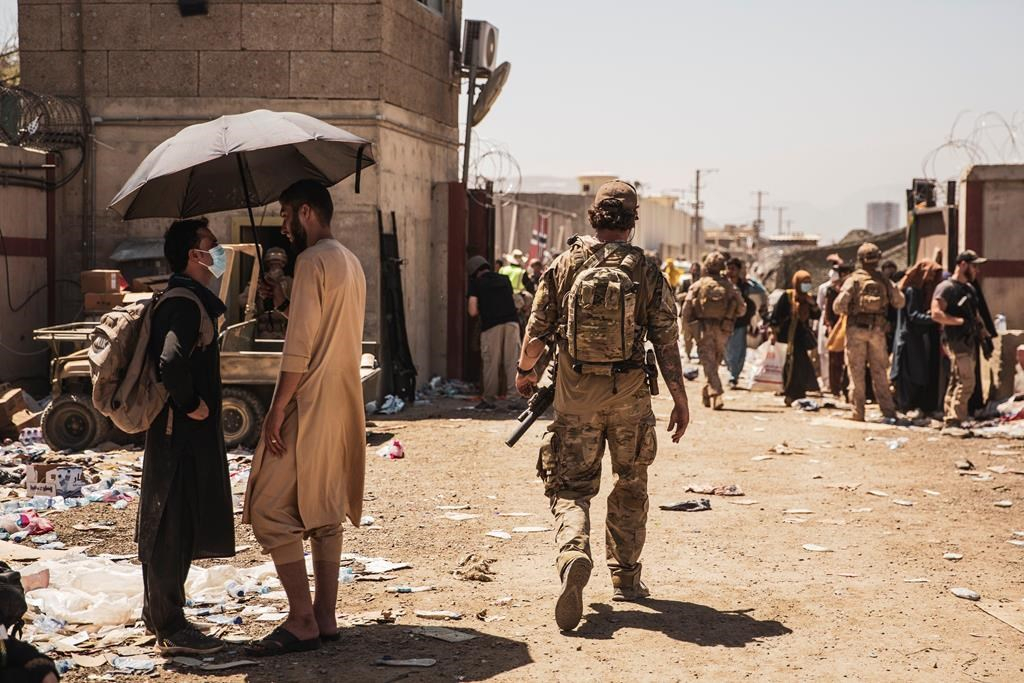 The withdrawal occurred as Canada and its military allies braced for imminent attack and to allow for the American-led mission to eventually meet its Aug. 31 deadline for departure.

The Associated Press reported that U.S. officials said 11 American marines and one navy medic were killed in the attack by a pair of suicide bombers and gunmen in the crowd clamouring outside Kabul airport. It's not known how many other U.S. personnel were injured.

An unknown number of Canadian military personnel stayed behind to assist the American withdrawal, and all were “safe and accounted for” after the Thursday bombing, the Canadian Forces said on Twitter.

Canada's departure, its fiery aftermath, and the concerns about those left behind laid bare the raw emotional scars of the firmly severed connection in the long-suffering country. There, Canadian blood was spilled alongside its western allies to help the Afghans build a prosperous country after the Taliban was routed in 2001. Its estimated more than 47,000 Afghan civilians, as well as over 66,000 members of the Afghan national military and police also died in the war.

"I'll just say from our perspective, warfare is always chaotic, and unpredictable. And hindsight is 2020. Based on the information we had at the time, yes, we were surprised by the speed of the of the Taliban takeover of Kabul. And I'm sure there'll be much ink spilt about this," said Gen. Wayne Eyre, the acting chief of the defence staff.

Eyre said Canadians were among the last to leave, that military personnel are taking the withdrawal personally and many will feel guilty that they had to leave people behind.

He said Canada brought roughly 3,700 people out of Afghanistan, which fell to the Taliban earlier this month.

Eyre said the airport was under constant threat of attack and Canada and its allies acted admirably.

An hour after Eyre and other government officials finished the sobering media briefing, locals left behind could hear several explosions near Hamid Karzai International Airport, named after the man who became Afghanistan's first post-Taliban president two decades ago.

"The conditions our armed forces members working under were unlike anything we've seen in decades, even during our previous mission in Afghanistan," Eyre said in the emotional briefing informed by his own service in Canada's military mission years ago.

Canada's military mission at Kabul airport ended Thursday morning with the majority of its personnel departing, but some Canadians and their families remain trapped in #Afghanistan, government officials said Thursday. #cdnpoli

"They've witnessed horrific things. They've faced incredible dangers. And the feeling of helplessness and guilt that arises from having to leave people behind can be overwhelming."

Gen. Kenneth McKenzie, the commander of U.S. Central Command, said the military was still trying to quantify the impact of Thursday's attacks, which were punctuated by gunmen opening fire on civilians and armed troops. The evacuation effort is continuing despite the attacks, he added.

"It would be difficult to overestimate the number of unusual challenges and competing demands our forces on the ground have faced," McKenzie said. The U.S. is attributing the attacks to an Afghan chapter of the Islamic State of Iraq and the Levant, also known as ISIS-K.

"The threat from ISIS is extremely real ... we saw it actually manifest itself here in the last few hours with an actual attack," he said. "We believe it is their desire to continue those attacks, and we expect those attacks to continue, and we're doing everything we can to be prepared for those attacks."

Moments after the long-delayed Pentagon briefing ended Thursday, new reports of a third explosion began to filter out of Kabul.

Eyre said about 1,000 Afghans bound for Canada were airlifted out of Kabul on Wednesday night, half on a C-17 and half by the Americans.

The federal government is still trying to determine how many Canadians might still be left in Afghanistan.

Cindy Termorshuizen, the assistant deputy minister at Global Affairs Canada in charge of consular, security and emergency management, said hundreds of Canadians and permanent residents and their families made it out of Kabul on Wednesday.

She said there were large numbers of Canadians on flights out her department was combing through the numbers and flight manifests to "gain a clearer picture" of how many might have been left behind.

The government is aware of people who have ended up in third countries, and Canada's entire network of foreign embassies and high commissions is on alert to track them down, she said.

"We recognize that today's announcement will be distressing news for those who are still in Afghanistan and wish to leave," said Termorshuizen.

"For our fellow citizens still in Afghanistan, if you need to move to a safer location please do so with great caution. Use your judgment to decide the best time and the safest means to do so. Assess the risk carefully as you take the necessary steps to ensure your security and that of your family."

Eyre said Canadian personnel will have to reflect on whether all the efforts expended in Afghanistan were worth it, but that Canadians made a difference in thousands of lives.

"We wish we could have stayed longer and rescued everyone who was so desperate to leave," said Eyre.

"That we could not is truly heartbreaking. But the circumstances on the ground rapidly deteriorated. Now this is an extraordinary humanitarian crisis. But make no mistake: this is a crisis of the Taliban's making."

MacKenzie said he believes the evacuation efforts can continue even in the face of continued attacks.

"Any time you build a non-combatant evacuation plan like this, and you bring in forces, you expect to be attacked," he said.

"We are prepared to continue the mission ... I think we can continue to conduct our mission, even while we're receiving attacks like this."

Daniel Mills, assistant deputy minister with Canada's Immigration Department, said visa applications for Afghan citizens who applied for them are still being processed.

Mills said the department received 8,000 applications under its special program for Afghans and 2,600 of those people who made it out of Afghanistan. But that doesn't mean the rest are still trapped inside the country, because some of those applicants have already fled to third countries.

"I want to assure you that IRCC has been and continues to work tirelessly to process all applications under our special immigration measures," said Mills.

This report by The Canadian Press was first published Aug. 26, 2021.

Canadian military will leave Afghanistan before Aug. 31, as Monsef appeals to Taliban

'Waiting to see what their actual true colours are': Worries for women in Afghanistan

The whole situation is so sad

The whole situation is so sad- and complex. My heart goes out to all the Afghan people.

I doubt that most Afghans are

I doubt that most Afghans are so misogynist that they want women to be completely invisible. To put such restrictions on half the population will make life in the country very difficult for men too. When Hitler rose to power and tried to eliminate all the Jews in Europe I am sure the non-Jews were equally afraid, restricted and tormented. Such violence makes life uncomfortable for all. Right wing political power in its extreme causes the people to fear people, to stop socializing and being engaged politically. It is an extension of the absolute contempt expressed for life in all its forms except the manufactured artificial relationships.