The university formerly known as Ryerson drops its name 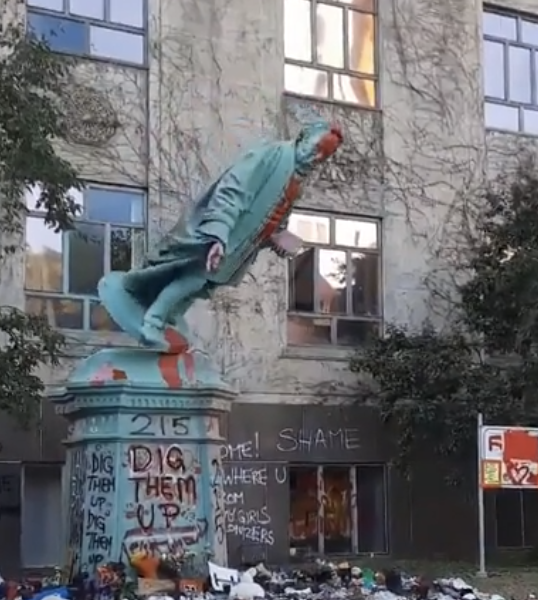 A statue of Egerton Ryerson is seen being pulled down in June 2021. Photo via video screenshot
Previous story
Next story

Ryerson University is no more.

The institution in downtown Toronto named after a man increasingly tarnished by his role in creating Canada’s residential school system will find itself a new name, possibly in time for the 2022 academic year.

That is one of 22 steps its board of governors agreed to take on Thursday, part of a reckoning with the country’s colonial past that has also seen the city agree to rename Dundas Street, which divides parts of the downtown campus.

“We recognize that a name change alone will not erase the systemic barriers and inequities that Indigenous and Black community members face within the institution,” Mash Koh Wee Kah Pooh Win (Standing Strong) Task Force co-chairs elder Joanne Dallaire and Catherine Ellis wrote in their report, which followed 10 months of community engagement, research, and reflection.

“The university must also actively address the legacy of Egerton Ryerson and other colonial figures through meaningful financial, educational, and cultural initiatives, as well as principles and practices for commemoration that uphold our institutional values,” it said.

Mohamed Lachemi, the university’s president and vice-chancellor, said it would heed the call to develop an action plan by Jan. 31, 2022, and the rest of the report’s recommendations in an “equitable, transparent, inclusive and timely manner.”

The residential school system, deemed a cultural genocide by the Truth and Reconciliation Commission, forcibly removed Indigenous children from their families and sent them to schools run by Christian churches where they were often punished for speaking their own language. Many students also experienced physical, sexual and psychological abuse at the hands of school staff or other students.

The contention around keeping the name grew during the consultation period when several First Nations discovered the remains of hundreds of children buried on or near former residential schools.

Egerton Ryerson is recognized as a key influence in the design of the system, with his expert advice sought in the mid-1800s and referenced after his death 50 years later in an official publication.

“For as long as the university is named after Egerton Ryerson, our narrative will be centred on his legacy,” the report said, noting the institution has had four names since its founding in 1948 when the Ryerson name was thought to deliver credibility.

“For as long as the university is named after Egerton Ryerson, our narrative will be centred on his legacy,” reads the Mash Koh Wee Kah Pooh Win (Standing Strong) Task Force report. #TRC #reconciliation #ResidentialSchools

A statue of the man was felled earlier this summer and its head removed and dipped in Lake Ontario, before it later showed up on a pike at 1492 Land Back Lane in Caledonia, Ont.

Removing his name is the

Removing his name is the worst kind of performative activity, carried out by a weakened university administration, bowing to pressure by activists who need to be seen as doing something.

"For as long as the university is named after Egerton Ryerson, our narrative will be centred on his legacy,”

And Ryerson did leave us a valuable legacy.
He was consulted on the residential schools proposal because of his prominent advocacy of public education in the mid 1800's, when the idea of free public education, available to all, was still a radical idea.
The creation of the Ontario public school system is part of his legacy. In that context, so is Ryerson University. His advocacy of education for all, so that ordinary people could become economically successful members of society has been justified by history. He thought that this would work for indigenous persons too. The indigenous faculty members of Ryerson are living proof of this principle. That this idea was exploited by unprincipled politicians in an attempt to assimilate indigenous peoples via forced removal and residential schools should not be laid at his door. Neither should the indignities and cruelties committed by the Christian church members who ran the schools.