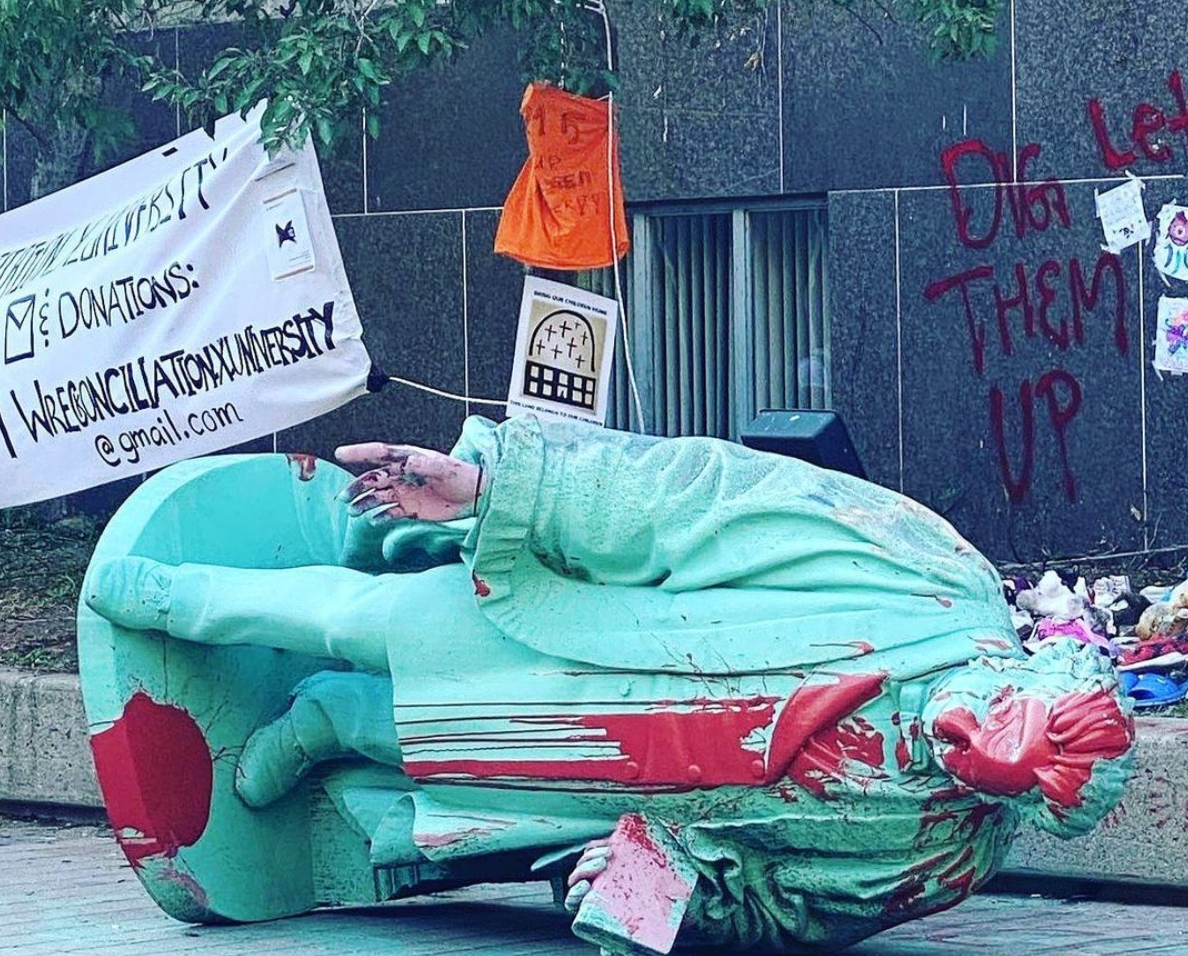 The toppled statue of Egerton Ryerson will not be restored or replaced, the university that bears his name said on Monday. Photo via @wreckonciliation_x_university / Instagram
Previous story
Next story

The statue is gone, but the name remains for now.

A bronze replica of Egerton Ryerson, an architect of Canada’s residential school system and the namesake of the university nestled between Yonge and Church streets in downtown Toronto, was felled by activists on the weekend, its head sawn off and discarded into Lake Ontario.

The move was a symbolic gesture that also pushed forward a conversation about colonialism and reconciliation at the university, even as a task force formed in November to consider Ryerson’s legacy said the news wouldn’t expedite its process.

“We recognize that the absence of the statue does not reconcile Egerton Ryerson’s legacy and so we will continue our work,” the co-chairs of the Standing Strong (Mash Koh Wee Kah Pooh Win) Task Force said in a statement after its fall.

The university says it will not restore or replace the statue.

The task force began meeting in January 2021 and engaged the community between mid-March and mid-May on what the university can do to reconcile the history of Egerton Ryerson. It is expected to make recommendations before the next academic year starts in September.

But Indigenous students, concerned the review was too focused on the fate of the statue, last month published an open letter calling on allies to use “X University” in their email signatures and other professional communications until the university agrees to change its name.

The university is facing a reckoning over its association with Ryerson, with its journalism department recently voting to change the names of two mastheads it publishes before the new school year.

The statue of Egerton Ryerson that stood outside the Toronto university bearing his name was pulled down and its head discarded in Lake Ontario on the weekend. But a university task force says it won’t rush a review of his legacy.

While the issue has simmered for years, it came into sharp relief with the discovery of the remains of 215 Indigenous children at a former residential school in Kamloops, B.C., last month.

The weekend escalation also has some incoming students fretting about how the issue might affect the value of their academic credential.

“I feel like an actual clown accepting Ryerson now that I’m seeing all this drama,” Eddie T, an incoming student who picked the school’s computer science program over the University of Toronto, wrote on a Ryerson community message board on Reddit after the statue’s removal.

He said he’d prefer to see the money it would cost to change the name put towards better aid for Indigenous students or more historical teaching.

Between 1831 and 1996, thousands of Indigenous children were taken away from their homes and forced into schools aimed at assimilating them into Canadian society. The residential school system was based in part on Ryerson’s argument that Indigenous children be educated to become farmers and agricultural labourers fortified by Christian principles.

Many students in these schools suffered physical, sexual and psychological abuse, and the Truth and Reconciliation Commission estimated approximately 4,100 to 6,000 children died while in the residential school system. The mistreatment has created intergenerational trauma in many communities due to forced relocation, land dispossession and loss of spiritual practices, language and culture.

The renaming effort has the support of Bhutila Karpoche, a PhD candidate at the university and the NDP MPP for Parkdale-High Park.

“Egerton Ryerson’s place in history as the architect of the Canadian residential school system deserves no honour,” she wrote in a letter to the university’s vice-chancellor Mohamed Lachemi last week supporting the call for a name change.

In the provincial parliament on Monday, she called on the Ford government to work with Indigenous groups to search the grounds of all former residential schools in the province, institute an annual day of mourning and remembrance, improve the teaching of Indigenous history in schools and seek apologies and restitution from those who ran the schools.

“Ontario and Canada must demand apologies from those who helped commit these heinous crimes,” she said. “Pope Francis, the Catholic Church and all other churches involved must own up to their part in this genocide, apologize and offer financial restitution to the families of those lost.”

Good for you students and

Good for you students and faculty . The committee, like in Bristol England , was set up to obstruct as long as possible any real action. At least the X R U is not rushing to put him back "on his pedestal"

How involved is Yellowhead Institute in the process. Ironic that the premier research inst. for F N issues is at XRU ? Justice says they should be the lead on what comes next for U.

Brilliant and brutal demand on plinth: shocked me, then I admired it. could we see #digthemup?

Given the era and the milieu

Given the era and the milieu in which Ryerson worked it was perhaps inevitable that he would apply all his inborn biases and prejudices to his life's work. I don't know if he would still try to justify his career but the tragedy of his and others' Victorian/colonial attitudes is that they have been picked up and weaponized by modern regimes - who once, ironically, were victims of those colonial and capitalist crimes

China's conquest of Tibet, and it's Orwellian oppression of it's Muslim minorities; the re-education camps that all modern tyrannies have used to solidify their rule are probably self-defeating atrocities. Culture is not so easily erased. Even the extremes of the Holocaust failed to suppress or eliminate the Judaic history, nor did the Armenian Genocide destroy this cohesive community. I suspect it is harder than ever to destroy civilizations but that will not stop the atrocities of the Fools who think they can totally control humanity.

I'd be willing to bet that

I'd be willing to bet that very few, if any, of the public figures honored by statues have no blood on their hands.
I wonder if adding information about their bad deeds might not do more to set history straight.
I wonder if removing the statues, as symbols of All That Was Not Good about those individuals does more in the long run to simply erase the record, so to speak.
I think of Mark Twain's books Tom Sawyer and Huckleberry Finn, being removed from libraries, and how that forestalled any discussion of racism that they raised in the days when they were widely read by kids.