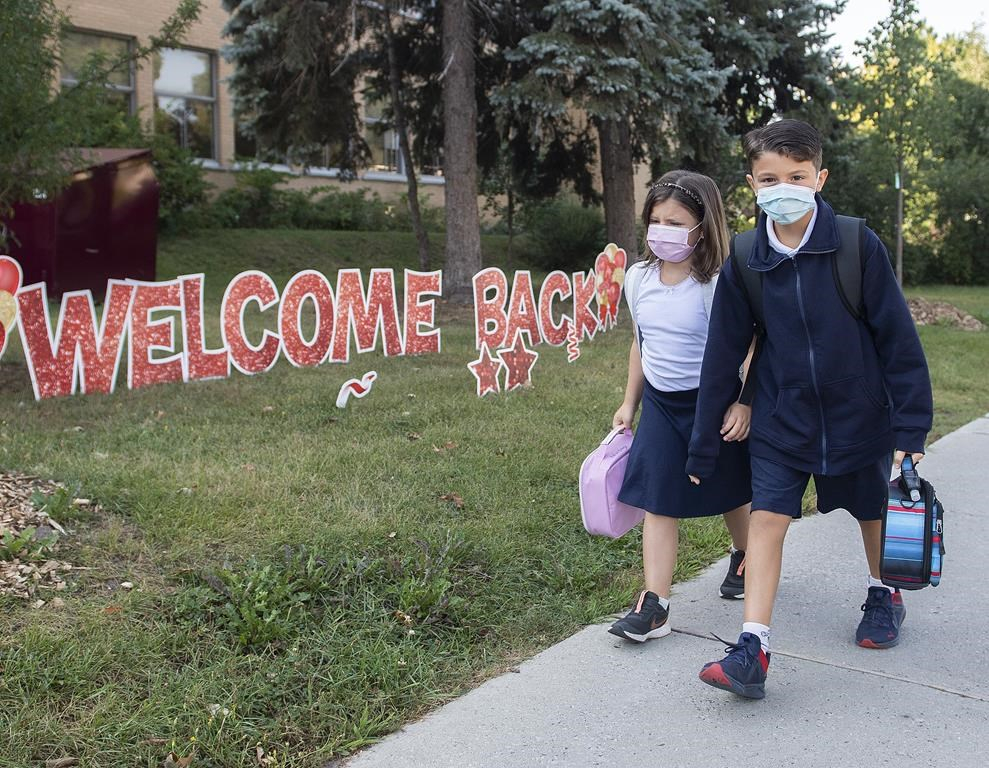 Adrien, 7, left, and Damien, 10, Borgia arrive for the first day of school in Montreal, on Tuesday, Aug. 31, 2021, as the COVID-19 pandemic continues in Canada and around the world. Photo by The Canadian Press/Graham Hughes
Previous story

Seven-year-old Jayda Watts-Simeon was bouncing up and down with excitement on Tuesday at the chance to be back in school.

Wearing a medical mask and carrying a pink backpack covered in images of sloths, the Grade 2 student at St. Monica's elementary school high-fived the English Montreal School Board mascot — a giant bee — and eagerly chatted to reporters about her favourite subject (math) and the kids who might be in her class.

As thousands of children in Montreal’s English-language school system went back to class on Tuesday, parents and teachers expressed hope for a more normal experience despite the ongoing COVID-19 pandemic.

At St. Monica, a cheer went up from parents as the rows of masked children were led into the building.

Jayda's mother, Chelsea Watts-Smith, decided to homeschool her last year out of fears the constant school closures would be too disruptive. But this year, she said she felt more comfortable.

"I think everyone has a better understanding of how to structure the day, and we're all a little more comfortable with the new normal," she said outside the school.

Shyeena Moore, who also homeschooled her daughter Shaleena last year, said her hope was for "just a very consistent, well-thought-through and planned out school year," adding that her daughter was excited to be in class.

Children in Grade 1 and up will have to wear masks in common areas and in class, but there won’t be any more class bubbles and extracurricular activities are allowed. English Montreal School Board chair Joe Ortona stressed that while everyone would have preferred a full return to normal, kids have adapted well to the measures in place.

The provincial government has also changed the protocol for managing COVID-19 cases in order to avoid the widespread class closures of last year. Unlike last year, only students who tests positive will be automatically sent home, while the others can stay in class as long as they wear masks and test negative for COVID-19.

"The perspective of public health this year is much more to keep schools open," Education Minister Jean-François Roberge said Tuesday. He has said the province will also gradually implement rapid tests in some schools.

At St. Monica, the happy screams of children and music from a live band helped create a festive atmosphere, but behind the excitement, some anxiety lingered.

John Cloutier, father of a Grade 6 student, said he's worried about the more contagious Delta variant but not enough to keep his son away from school. He said he has confidence in the school administration and is hopeful for a good year — preferably with fewer COVID-related shutdowns.

"They may be sent home once or twice and we’ll deal with it, but obviously we’re hoping for as smooth a year as possible," he said.

Principal Silvana Crigna said that while everyone was excited to welcome students back, she acknowledged there's also a "certain level of anxiety" among teachers about being in a room full of children who are too young to be vaccinated.

She said the government's decision last week to impose a mask mandate in school was a relief for most, adding that St. Monica has worked hard to find a balance between safety and letting kids learn as normally as possible.

Crigna said she's learned over the last year that communication is key to easing fears.

"Whether the anxiety happens with our students or the staff or some of our families, it’s just being there for them and making sure if they’re informed if ever there’s a case, being transparent with that and making sure everyone understands the situation and the actions we’re taking," she said.

St. Monica has set up tents outside to allow the possibility of outdoor classes, she said, and teachers have been offered protective equipment. The school's common areas, she added, are cleaned every two hours. Gym classes, meanwhile, will be held outdoors as much as possible so children will get a break from wearing masks.

Noah Trister, who teaches English and math, said the first day of school would be spent like any other: helping kids get their lockers, settle in and making plans to decorate the classroom.

"Everything is going to be normal," Trister said. "Yes, we'll be wearing masks, but the kids are used to it and have really well adapted to it, and I don't think that's really going to be a factor for anyone."

Masks will be mandatory in some Quebec high schools