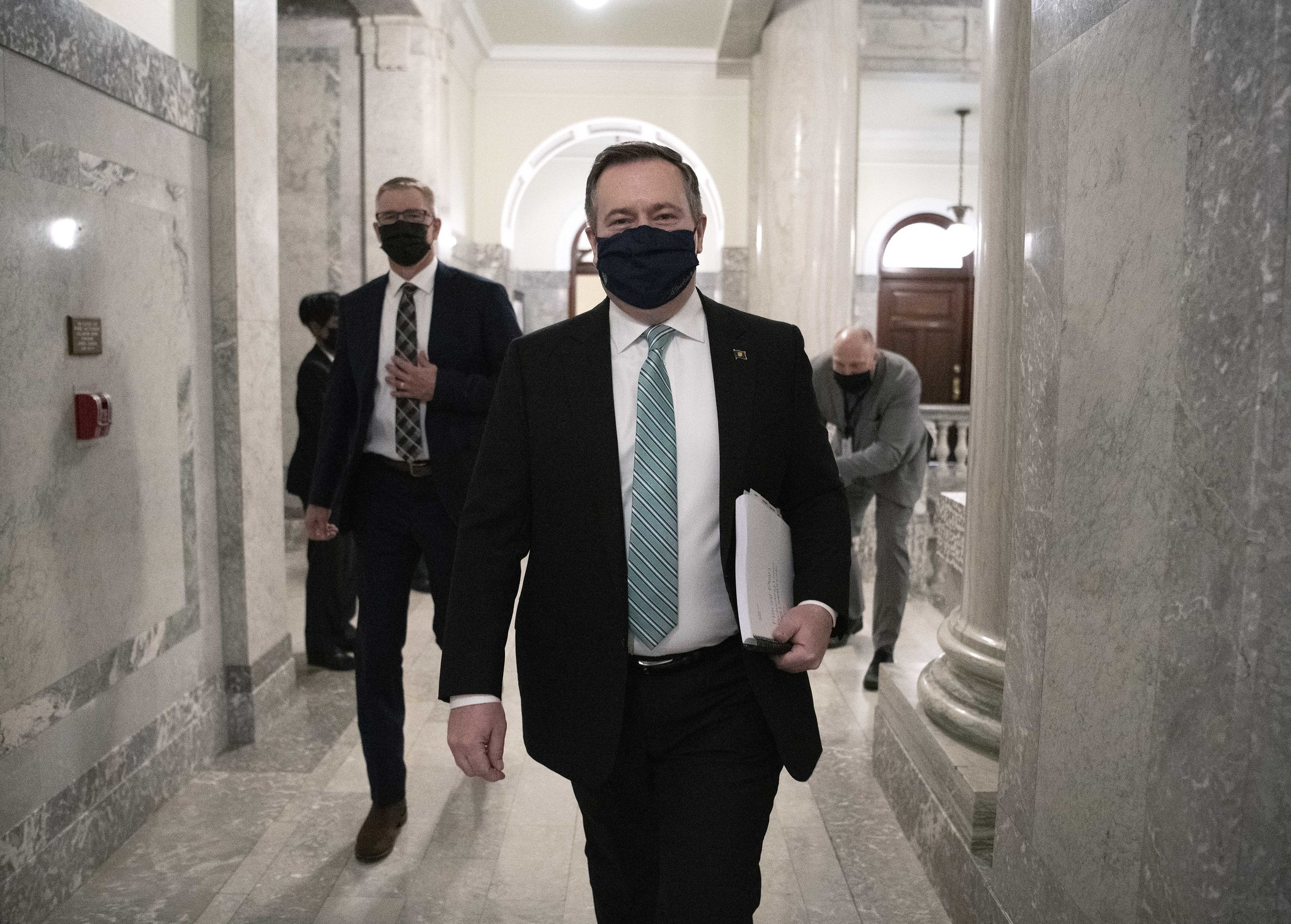 When Jason Kenney promised Albertans the “best summer ever,” he probably didn’t imagine it would end like this.

On Friday, at his first press conference since returning from a two-week August vacation, Kenney announced a suite of new measures aimed at trying to contain the spread of the Delta variant in his province. But with Alberta now reporting nearly one-third of the total cases in the country, and its ICUs already at 95 per cent capacity, his measures will almost certainly be too little and too late.

Worse, they are a slap in the face to the millions of Albertans who have already been vaccinated. After all, while they dutifully lined up and got their jabs, those who have been holding out — and are now fuelling the pandemic’s fourth wave — will be rewarded for their recalcitrance with a $100 gift card.

Health Minister Tyler Shandro tried to spin this as an “innovative way” to increase vaccine uptake, but the truth is the UCP just made rewarding stupidity and anti-social behaviour into official government policy. Even the “prosperity bonus” that Ralph Klein handed out in 2006 looks principled by comparison.

And while Kenney told reporters “we have left no stone unturned, and yet we have the lowest vaccination rate in Canada,” the truth is there’s one stone they refuse to even look under. He and his government have repeatedly dismissed the possibility of introducing vaccine passports, which are being implemented in British Columbia, Manitoba, Quebec, and Ontario.

In Doug Ford’s province, just the news that proof of vaccinations will soon be required in order to access certain non-essential services caused a huge surge in vaccine appointments. After booking 3,479 appointments on Aug. 31, the number spiked to 7,125 the following day — nearly half of them for first doses.

Sticks like this work, and the evidence continues to grow as more jurisdictions decide to use them.

As Dr. Isaac Bogoch, an infectious diseases specialist at Toronto General Hospital, told Global, “When you look at the rates of vaccination, they went up pretty dramatically immediately after the announcement was made that a vaccine certificate program was going to be implemented. It happened in France, it also happened in Quebec, and then again in British Columbia.”

So why won’t Kenney look under that particular rock, given what he would find underneath it? It’s almost certainly because it would upset the very part of his base, and some MLAs in his caucus, who have already threatened to rebel against him.

One of those MLAs, Airdrie’s Angela Pitt, recently signed a letter calling on her government to pass legislation “that prohibits discrimination based on private, personal health records,” and warned about “segregation of our society.”

Jason Kenney's decision to give anti-vaxxers $100 gift cards if they get the jab is a slap in the face to the millions of Albertans who have already been vaccinated, writes columnist @maxfawcett for @NatObserver. #COVID #ABpoli #elxn44

In other words, while a recent Leger poll showed 77 per cent of Albertans support mandatory vaccinations, it’s the other 23 per cent driving government policy right now. But Kenney should probably start worrying about the rest of the province, too. After all, that same poll showed that while only four per cent of Albertans are “very satisfied” with his handling of the pandemic, 50 per cent — more than 10 times as many — are “very dissatisfied.”

All told, 65 per cent of Albertans are dissatisfied with his performance on this file, by far the highest figure in Canada.

Friday’s performance may have sealed Kenney’s political fate. After all, while it enraged those on the centre and left, his decision to re-implement a mask mandate has also provoked the far right. The real question now is whether it will have any spillover effect on Erin O’Toole’s fate as well. It wasn’t that long ago the CPC leader was praising Kenney for his management of the pandemic. “When it comes to getting our country back on track,” he said, “the federal Conservatives can learn a lot from our UCP cousins.”

If the Trudeau Liberals are looking for a way to stem O’Toole’s momentum, they should start by asking him what Canadians ought to be learning from Kenney’s handling of the pandemic. Is it the blind reliance on “personal responsibility”? The attacks on doctors and nurses? The cavalier charge into the “best summer ever”? Or the decision to bribe the unvaccinated with taxpayer dollars?

These are all questions that O’Toole should be forced to answer. If Canadians don’t like what he says, or if they start to look to Alberta as an example of what a Conservative government might look like, he may ultimately have Kenney to blame for his own downfall.

For a politician who so clearly dreams of taking Justin Trudeau down, and who openly campaigned against him in 2019, serving instead as the key to his re-election would be the bitterest of pills for Kenney to swallow.

I am a happy subscriber, but

I am a happy subscriber, but this is not an article: it is an opinion piece and should be so labelled.

I had to scroll back up and

I had to scroll back up and your correctness made me laugh. Some people don't read for comprehension. They just want to troll and vent their spleen.

I so much hope that you are

I so much hope that you are absolutely right.
With his supporters showing distinctly that they will sink with the leader as in a cult like fashion, it is difficult to predict what will happen.
Most Albertans are sick and tired of these incompetent levels in any front of their government. It is astounding.
Thank you

The only reason Jason Kenney

The only reason Jason Kenney does not implement a vaccine passport is because he always has to be different and stand out as the man against the rule. No to 10 dollar day care, no to vaccination passport, no to September 30 holiday as Reconciliation day and all the other NOs we have witnessed since they took over.
He just wants his way or the highway and unfortunately his way is always the worse way due to his incompetence

That's not it. And he's not

That's not it. And he's not that different--Scott Moe next door is pretty much the same, and really, Ford has been doing as badly as he can get away with given the somewhat different constraints of Ontario.
No, he's against most of that stuff because the Conservative ideology says government can't be allowed to do anything useful, because then people might want more of it, and it might end up doing things that, privatized, could have been making super-rich people a profit.

Nicely put. This is a great,

Nicely put. This is a great, concise summary of some of the biggest drivers of Conservatives' actions. A good reminder, too, that Conservatives like Kenney aren't the "rebels" they like to pretend they are - they're just tools of the greedy rich.

seems like Albertans really need to show him the highway. Time to do it Alberta voters.

One can only hope that the

One can only hope that the cards will be provided only after a second shot ... and trigger an ooh-gahh horn blast whenever they're used ... along with flashing lights, hisses, boos, and an announcement that this is what an anti-vaxxer looks like when money's offered ... followed by the sound of a toilet flushing.

The really stupid part about

The really stupid part about anti-vaxxers also being anti-mask, is that the vaccine is for their own benefit: it keeps them from dying ... while masks are to protect others, including those near and dear to anti-maskers who don't care whether they get it or not. How about their little nephews or sisters, or their grandmas?
I have to admit I'm confused about the "liberties" and "freedoms" they think are theirs and being hampered. As far as I know, it is against the law to endanger another's life ... and any private establishment can refuse anyone entry, as long as it's not on grounds prohibited by our constitution or human rights code. I've read them. They don't cover either situation.
In fact, I'd invite anyone who thinks these alleged "rights" exist, to read The Quarantine Act, in which there is legal provision for far more stringent measures than have been invoked.

A political culture that is

A political culture that is truly mystifying. Thanks for writing such a perceptive piece.

I left Alberta long ago. I

I left Alberta long ago. I reside in BC and I just got my vaccine 'card' (a QR code) yesterday. Once in the BC Health Services website, it took less than 5 minutes to register and a code to be issued and displayed. I did a screen capture and created a PDF and took a photo of it to carry around in my phone (and a printout for my wallet) and I'm set for the duration of the pandemic. The suggestion that this is an assault on my personal freedom is not just ludicrous, it's twisted.

I have several octogenarian relatives in Alberta, several are not in the best of health. I fear for their lives if / when they require urgent medical attention in any hospital in the province's big cities because of the sheer number of COVID cases there and the resulting overcrowding. This situation was predictable, and now it's unacceptable that the elderly and immune-compromised are being held hostage to Jason Kenney's intellectually-impaired and demonstrably dangerous ideology.

Calgary mayor Naheed Nenshi is Kenney's biggest critic in Alberta. He suggested that it could get so bad under Jason Kenney's rule that a deadly Alberta mutation or variant could arise from the large pool of unvaccinated people. They should name it the Kenney Variant. This would follow the Kenney Recession, the Kenney Petro Ass-kiss, the Kenney Komedy Troupe (War Room) and the Kenney Effect featuring deep public healthcare cuts and privatization smack in the middle of a worldwide pandemic.

To those vaccine conspiracy believers, please note that the little voice emanating from the Bill Gates chip planted in my brain is easy to ignore. I still have my iMac and MacBook and don't intend to go PC anytime soon.