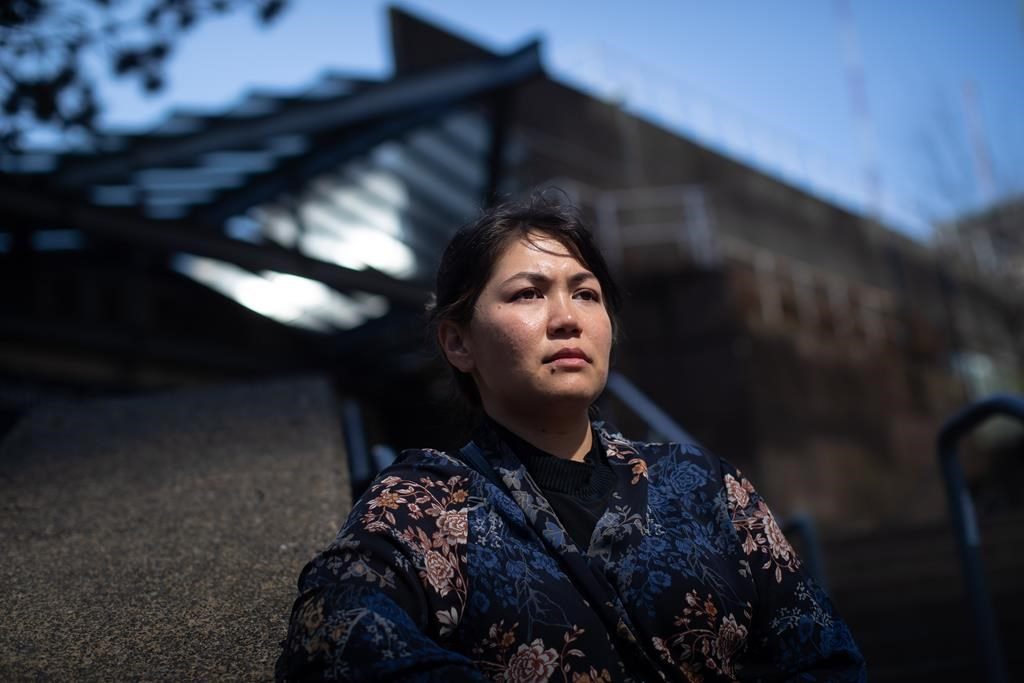 Friba Rezayee, who was one of Afghanistan's first two female Olympians in 2004, poses for a photograph in Vancouver, on Wednesday, September 1, 2021. File photo by The Associated Press/Darryl Dyck
Previous story
Next story

Shortly after Afghanistan fell to the Taliban, Friba Rezayee's phone started lighting up with messages from women and girls pleading for help.

Rezayee, who made history as one of Afghanistan's first two female Olympians in 2004, now lives in Vancouver. She founded Women Leaders of Tomorrow to support women and girls in Afghanistan through education and athletic opportunities.

Rezayee is among several advocates working to help however they can, but she said she feels at a loss since Canada ended evacuation efforts Aug. 26.

"I'm very angry," she said. "Canada and all the NATO countries had and still have responsibility in protecting women's rights and human rights and democracy."

The Department of Immigration, Refugees and Citizenship says in a statement that Canada and its allies have received assurances from the Taliban that Afghan citizens with travel authorization from other countries will be allowed to leave Afghanistan.

"Until the security situation stabilizes in Afghanistan, people must be mindful of the security environment and, where possible, take the necessary steps to ensure their security and that of their family," it says.

The department says staff have been working around the clock to answer calls and emails from people in Afghanistan who are seeking help and advice. Its primary focus is to identify how many Canadians and permanent residents remain in the country and work with allies to provide them with essential support.

Around 1,250 Canadian citizens, permanent residents and family members are believed to have been left behind, Foreign Affairs Minister Marc Garneau has said.

The government has also committed to resettle 20,000 vulnerable Afghan nationals, including those who supported Canada's work in Afghanistan, their families and those who fall under Canada's "humanitarian commitment," such as women, human rights activists and journalists.

The Immigration Department says 3,700 evacuees, including Canadian citizens and permanent residents, were evacuated before Aug. 26. By Sept. 6, it had received 11.400 applications and approved 7,100. Under special programs, 2,200 Afghan refugees have arrived in Canada.

It was a privilege to compete at the Olympics, but after she returned, she faced death threats from those who believed it was inappropriate for a woman to be an athlete and she had to go into hiding.

"That was a great honour, it was more than I could ask," she said. "But it also put me at high risk."

Renia Tyminski, an Ontario retiree who volunteers teaching English online with Women Leaders of Tomorrow, said one woman spent five days outside the airport in Kabul hoping to board a flight before the U.S. mission ended Aug. 31.

Tyminski said she tried to get her help via the Canadian government but she only received a form email acknowledging its receipt.

Ultimately, she got the woman's name on a U.S. State Department list for evacuation after going through a U.S. non-governmental organization, she said. Although she had the paperwork, the woman was unable to get past the Taliban at the gate.

Tyminski tried to connect in the same way with Canadian officials but was unable to get anybody on the phone, she said.

"We tried, but quite honestly, there was more response from the U.S. side. I was in touch by phone, in email conversations with several organizations as well," she said.

Tyminski said she contacted her local MP, who directed her to contacts with the Canadian Air Force and the Immigration Department, but she only received a form email in response.

"They acknowledged receipt of my email but they didn't offer any help."

The department said it is unable to provide specific details on cases for privacy reasons and the safety and security of those involved.

Tyminski says the young woman is weighing her options but it's difficult to know what to do, especially given conflicting messaging from Canadian officials.

Garneau has said the government was reaching out to Pakistan and other countries neighbouring Afghanistan to facilitate the entry of people with links to Canada. But he also noted the government is advising against such travel.

Tyminski said getting to the Pakistan border will require passing Taliban checkpoints and for now, the woman is in hiding.

"It's a lot of guesswork going on," she said.

This report by The Canadian Press was first published Sept. 10, 2021.