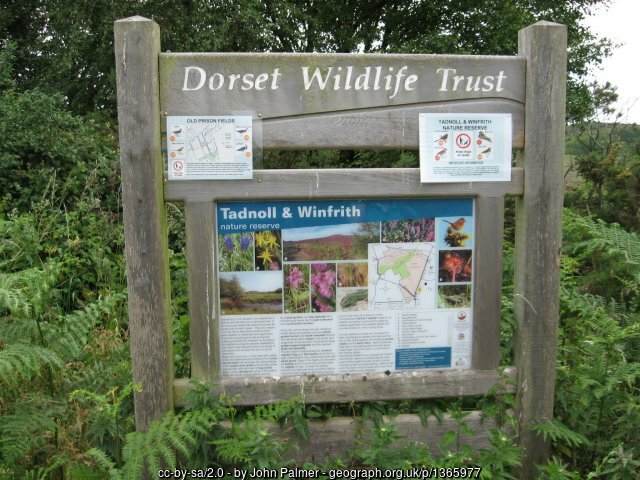 It is a double boost for ecology. River pollution is reduced and habitats for wildlife are restored, a point emphasized by Brian Bleese, chief executive of Dorset Wildlife Trust. Photo by ©John Palmer (CC-BY-SA2.0)
Previous story
Next story

Julia Davies had one only goal in mind when she sold her share of the outdoor equipment company Osprey Europe a few years ago. The entrepreneur decided she was going to spend her millions turning back the clock — by returning swathes of the British farmland to wilderness. Nature is in crisis in the U.K., she argues, and its threatened wildlife needs all the protection it can get.

A few months ago, the first steps towards her rewilding dreams were taken with the purchase of 170 hectares of fields and meadows that surround Court Farm, near Bere Regis, Dorset. The land cost almost £4 million, but thanks to the prospect of a bridging loan from Davies, Dorset Wildlife Trust has been able to acquire ownership and has begun creating a nature park there.

Pastures where Friesian cattle once grazed and fields of wheat, maize and barley — which fed the Court Farm herd — will now be returned to nature. New woodland will spread over the pastures, wildlife and plants from hedgerows will colonize fields while a network of deep ditches which have drained the farm for decades will be filled in and blocked. Wetlands will return to the landscape — along with populations of frogs and newts.

Other new residents will also be enticed to make homes at Court Farm. These could include yellowhammers, silver-washed fritillaries, and sand lizards. “Wildlife in this country has been pushed to the margins for too long,” said Davies. “We have been farming far too intensively and badly need to give wild animals and plants a chance to reclaim the countryside.”

Crucially, the plan adopted by Davies — a commercial lawyer turned green activist — could serve as a template for future rewilding projects as the U.K. struggles to counter its mounting biodiversity crisis. “Rather than buy my own piece of land to rewild it, I decided to lend money so that conservation groups such as wildlife trusts could get control of a piece of land and raise money, through local appeals, crowdfunding, or grants from local councils. Then they could pay me back.”

The reasoning was straightforward, she added. Once a group like Dorset Wildlife Trust owns a piece of land, it becomes far easier for it to raise funds for conservation work. “A charity cannot put in an offer on land until it’s got all its ducks in a row. It has to have funds and trustee approval, but often it cannot get trustee approval because they have not got all their funds ready.

“It’s a circular problem, so I decided to find a way to cut through it. I lend money so the charity can buy the land, the charity repays me, and then I use that money to fund another project. That way, I get to help rewild a lot more land for my money.”

In fact, the promise of money from Davies was sufficient for Dorset Wildlife Trust to obtain funds from local authorities, Dorset council, and Bournemouth Christchurch and Poole council.

“The councils supported us because Dorset — like other parts of the U.K. — is facing a problem caused by the buildup of chemical fertilizers in runoff water,” explained Rob Farrington, who has taken over management of the Court Farm project.

Swathes of British farmland are regularly sprayed with fertilizer. Rainfalls and waters rich in nitrates and other chemicals pour off fields and are carried away, often through sunken ditches dug to keep the land drained and dry. Some of the ditches at Court Farm are more than three metres deep. This polluted water then runs into streams, then into rivers, and finally — in the case of Court Farm — into Poole Harbour to the east.

“Combined with runoff from other farms across the county, this is now causing real headaches,” added Farrington. “Nitrates have triggered algal blooms across Poole Harbour and these are now causing serious ecological damage along dozens of miles of coast in the bay there.”

As a result, the trust was given more than £3 million by the two councils to ensure that nitrate runoff from Court Farm was halted, a move that would help to mitigate Poole Harbour’s ecological headaches. This cash — plus money raised from various local legacies — was then used to pay for Court Farm and has left Davies free to begin working with another conservation group in order to rewild a further patch of local farmland, a process she intends to continue over years to come. “The crucial point is that we wouldn’t have got there without the promise of Julia’s money,” added Farrington.

It is a double boost for ecology. River pollution is reduced while habitats for wildlife are restored, a point emphasized by Brian Bleese, chief executive of Dorset Wildlife Trust. “Wildlife in Britain has been pushed to the margins for too long. More than 70 per cent of U.K. land is now devoted to agriculture, which means most wildlife has been left huddling in the hedgerows. We have bright green pastures all over the country with very little going on within them. We need to change that and get the wildlife out of the hedgerows and back onto the land.”

In the case of Court Farm, its thick hedgerows of oak, elder, blackthorn, hawthorn, ash, dogwood, field maple, and other plants criss-cross the land creating a wide, latticed landscape. The undergrowth there provides homes for mammals such as hazel dormice and spiders that include the ferocious-looking wasp spider. As wild vegetation spreads, it is hoped these animals and other creatures should slowly move in and make homes in the rewilded landscape.

Emerging wetlands should also provide homes for reeds and attract dragonflies and amphibians, such as great-crested newts. “All the species that are crying out for a bit of mess to live in will find this attractive,” said Farrington. “And of course, wetlands hold on to greenhouse gases very well and have a superb carbon footprint.”

However, the wildlife trust team stresses it has no fixed species in mind in rewilding Court Farm. “This is not a typical conservation scheme where you take a precious small remnant of habitat — such as a chalk streambank or a bit of heathland — and work hard to keep it as it is today in order to preserve a specific endangered animal that still lives there,” said Farrington. “We are simply taking out the high-maintenance aspect of modern farming and waiting to be surprised by what takes over the landscape. In that sense, this is an experiment not just in financing but in conservation.”

Intriguingly, one of the first tasks involved in preparing these new habitats will be handed to pigs. “They are perfect for grubbing up the ground, breaking open the surface — and that will allow wild plants to take over the fields that have been closely cultivated over the past decades,” said Farrington. “So we are going to borrow a few pigs from a local farm to start off the whole business.”

It will take years to restore wild habitats in this little corner of Dorset, but Bleese, Davies, and Farrington are confident they can create a resource that will not only help wildlife but will also aid the local community. “It is not the case that people living in the country have open access to the land,” said Bleese. “They are often excluded from large trenches of estates and farms that surround their homes. They have been cut off from the countryside as well.”

As a result, there are plans to increase public access and use farm buildings in the nature park and open spaces for community events, as well as creating local jobs. The site will also still provide a role in food production, with meat from free-grazing animals and provision of allotments. “A key part of the project is to find out what the local communities want us to do with the land as it is being rewilded,” added Davies. “The most important thing is we have started, and hopefully this will provide a model for more rewilding schemes that can help save nature in Britain.”

When it comes to the climate crisis, we can’t just assume everything will be fine

B.C. adds more land for parks — but will it help biodiversity?