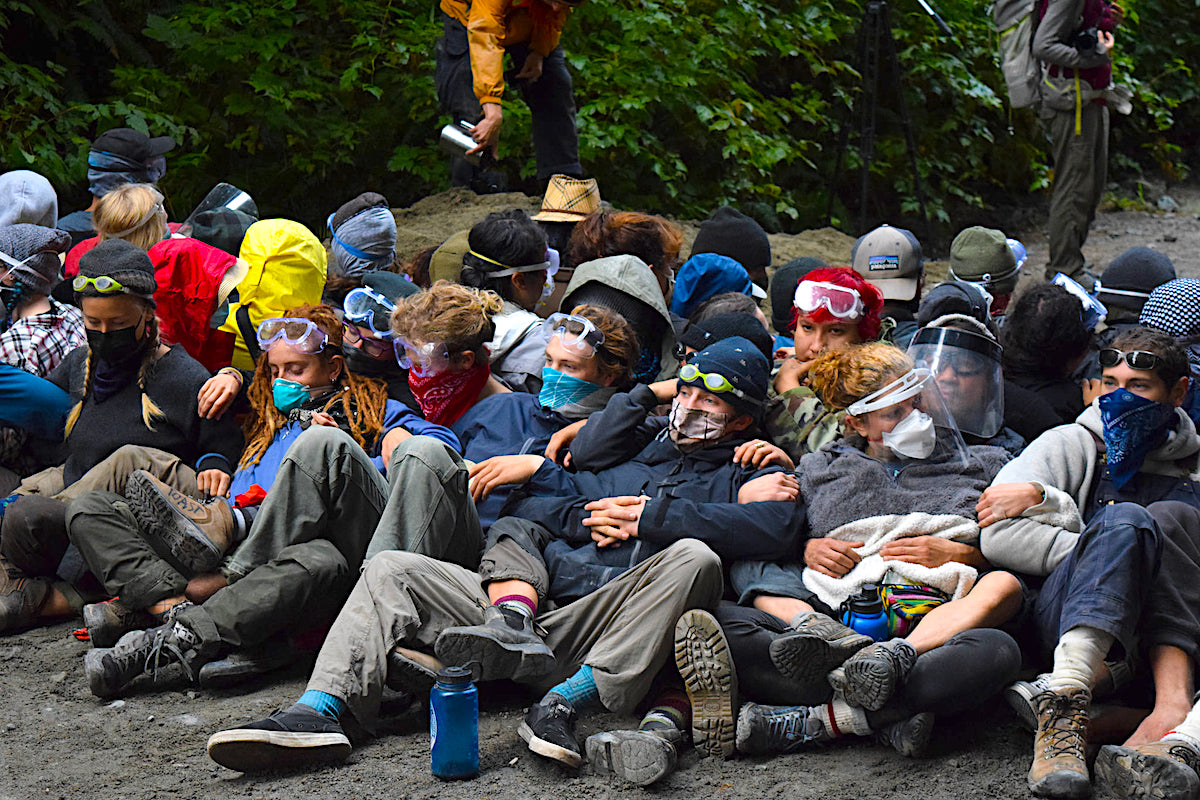 Close to 1,000 old-growth activists at the Fairy Creek blockades have been arrested, making it the largest civil disobedience movement in Canada. Photo courtesy of Rainforest Flying Squad / Facebook
Previous story
Next story

A slew of legal applications involving the contentious Fairy Creek old-growth blockades are moving forward in B.C. Supreme Court this week as the protest becomes one of the largest acts of civil disobedience in Canada.

Nearly 1,000 old-growth defenders have been arrested in the year-long protest on south Vancouver Island as of Saturday evening, according to RCMP.

The number now exceeds the arrests made during the historic War in the Woods protests in the Clayoquot Sound over clear-cutting on the island’s west coast that saw 856 people arrested before it wrapped in the early 1990s.

The Fairy Creek arrests are a result of RCMP enforcement of a court injunction won by logging company Teal-Jones in April after protesters with the Rainforest Flying Squad (RFS) blocked access of forestry crews to various stands of old-growth in tree farm licence (TFL) 46 near Port Renfrew.

On Tuesday, court proceedings will get underway to address a variety of court requests, including a one by Teal-Jones to extend the injunction by a year, said RFS spokesperson Kathleen Code on Monday, adding the activist group’s defendants plan to challenge the application.

“Teal-Jones is asking for a one-year extension, which seems quite unbelievable,” Code said.

“Injunctions are usually meant to be a rare and temporary sort of remedy so that seems rather excessive.”

RSF’s legal counsel plans to argue the extension request should be denied on the basis that Teal-Jones and the RCMP have acted unlawfully and failed to follow aspects of the injunction, Code said.

Saul Arbess, RSF spokesperson and one of a trio of applicants involved in upcoming court applications, said the environmental group wants a court order declaring RCMP use of exclusion zones after July 20 were illegal.

The group is also seeking to find the RCMP in contempt of court due to continued violations of the original court order issued April 1.

Old-growth activists in #FairyCreek are asking a B.C. court to curb RCMP powers. The Mounties are asking the court to expand them. Here's how a slew of legal applications could shape the Fairy Creek protests this week.

The court application also alleges the RCMP has used excessive force, including the “unrestrained” use of pepper spray, as well as members refusing to identify themselves to people subject to enforcement, and unlawfully seizing personal possessions and vehicles of people not in contravention of the injunction.

In turn, the RCMP, represented by the Attorney General of Canada, is applying to the court to change the injunction to allow the force greater powers, including the right to control access to areas in the injunction zone where enforcement is occurring and any routes in or out of those areas.

Failing that, the RCMP wants to search people, bags or vehicles for supplies that might support protest efforts in the extensive injunction area — even at night, or outside the immediate time frame of enforcement action.

Should individuals refuse a search or officers find any suspect materials, RCMP can deny entry into the injunction zone, or TFL 46 — a large geographical area wedged between Lake Cowichan and Port Renfrew.

Protesters are using more sophisticated devices to frustrate officers, who also observe the transport of materials to bolster blockades, the RCMP added.

If the RCMP doesn’t secure the changes to the injunctions, the force “will have to reevaluate its ability to continue to conduct enforcement operations,” the court document said.

It’s absurd the RCMP, which is already violating the injunction, is applying to further increase its powers to make its unlawful acts legal, said Arbess.

“It’s already been declared unlawful by Justice (Douglas) Thompson, but they’re seeking to reverse it,” he said.

Justice Thompson is scheduled to hear arguments from all the parties involved until end of day Friday.

However, dozens of people arrested at the blockades, and who are facing possible criminal charges and jail time, had their court dates deferred until Nov. 15.

The concern is if the RCMP is granted increased powers to contain activists without oversight, there will be more violence and illegal activity by its members, and people’s freedom of movement and right to peaceful protest will be curtailed, Arbess said.

“The problem is it would give police free rein, without witnesses, to carry out their arrests,” he said.

It has come to my attention

Where is the Provincial

Where is the Provincial Government in all of this? When it becomes necessary to protect oneself from the RCMP are we not heading for some level of dictatorship here? The Province must act ... not hide behind the law. A THOUSAND people have been arrested and no resolution.