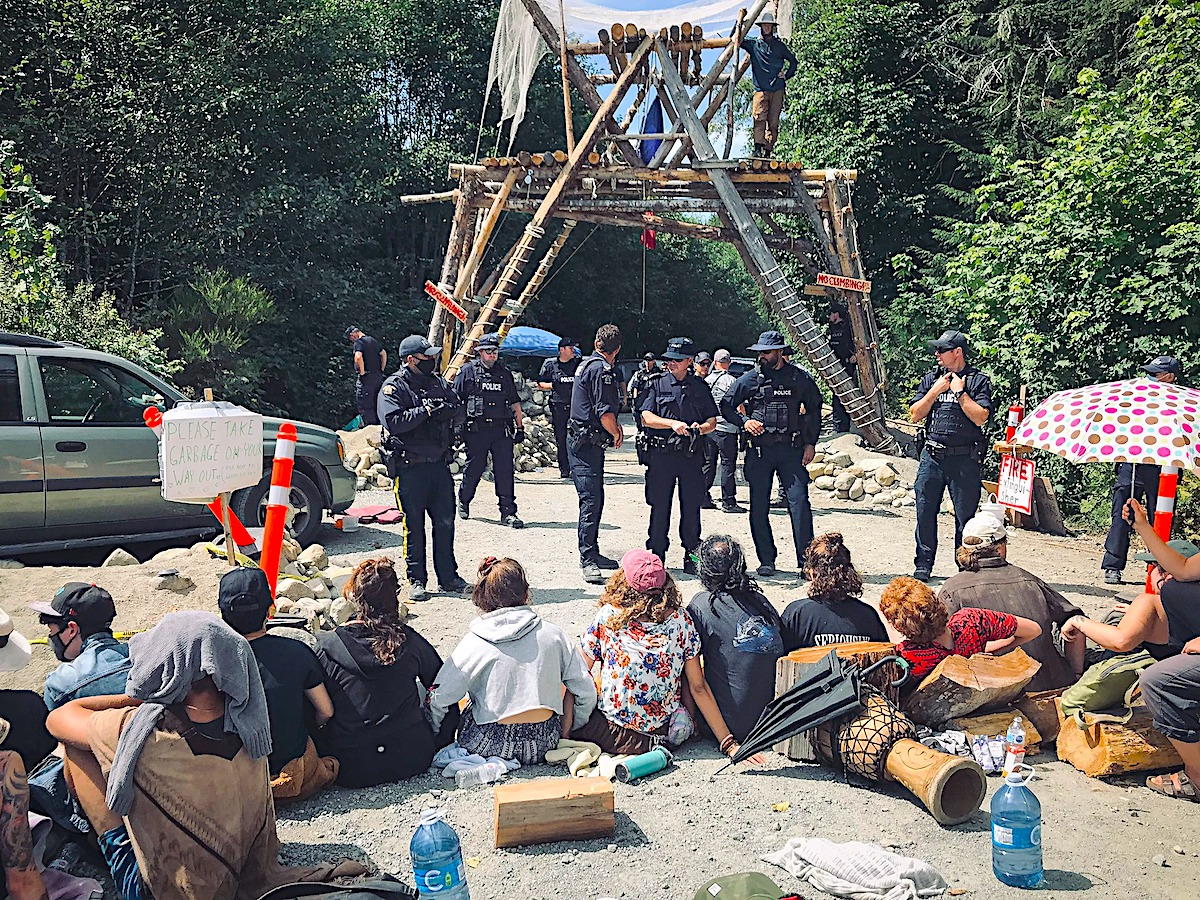 Old-growth protesters at Fairy Creek blockades suggest police are using questionable methods to enforce an injunction despite a court decision limiting their power. Photo by Granite, courtesy of the Rainforest Flying Squad
Previous story
Next story

Police are continuing to employ questionable tactics as they enforce an injunction at the Fairy Creek old-growth blockades on Vancouver Island despite a recent court decision declaring their actions unlawful, activists allege.

Not only are the RCMP ignoring the B.C. Supreme Court ruling that deemed broad exclusion zones, checkpoints, searches and media restrictions illegal, but police are doubling down and escalating their use, said Kathleen Code, a spokesperson for the Rainforest Flying Squad (RSF), the coalition behind the old-growth blockades in the Port Renfrew region.

“The court made its decision around the illegality of RCMP exclusion zones … but we see no effect whatsoever on the ground,” said Code.

“And obviously, from their actions of the last few days, they have no intentions of paying any attention to this order at all.”

On Monday, RCMP launched extensive operations at a number of blockade camps, including the RSF's headquarters camp, arresting 33 people, while hundreds of supporters demonstrated in Victoria to mark the first anniversary since the civic disobedience protests began against logging old-growth in the Fairy Creek region. As of Thursday afternoon, 597 individuals — 39 of whom have been previously arrested — have been arrested.

In addition to arresting a photojournalist, using unnecessary force and arresting individuals not actively blocking the road, RCMP members continue to tow people’s cars and seize items, such as keys, phones, wallets, and other personal possessions, said Code, adding getting the property back has been extremely difficult.

Supreme Court Justice Douglas Thompson released his written decision on Monday detailing the reasons for his ruling — announced in court July 20, which also condemned police for unduly restricting media access while covering the blockades, and arrests within the injunction area.

Police use of broad exclusion zones and blockades or checkpoints exceeds what is required to enforce the injunction — which prohibits blocking road access in the area covered by logging company Teal-Jones’s tree farm licence (TFL) 46 — and limits individuals' ability to move freely, resulting in the loss the freedom of assembly, expression and the press, the justice said.

“My assessment is that the degree of interference with liberties of members of the public and members of the media is substantial and serious,” said Thompson.

“The RCMP has not established that the police actions under examination are reasonably necessary for either of the duties they assert,” Thompson said.

“Either the RCMP officers on site Tuesday have not heard about the recent court order, or they don’t care,” said photojournalist Colin Smith, who arrested at #FairyCreek #OldGrowth blockades despite a court ruling limiting police enforcement tactics.

“It follows that the RCMP do not have legal authority for these actions. The actions are unlawful.”

The original court order secured by Teal-Jones in April prohibits any interference with the use of roads in TFL 46 — including use by members of the public, Thompson said.

RCMP authority to restrict vehicle and pedestrian traffic is limited to the extent that’s reasonably necessary to permit the safe arrest and removal of persons disobeying the order, or to enforce the right of anyone, including the public, to use forest service roads, he noted.

Additionally, the injunction doesn’t allow police to limit public access as a preventative measure to keep people from violating the injunction order in the future, Thompson said.

It was unclear if RCMP had employed less-intrusive measures, such as monitoring rather than banning traffic, arranging for tow trucks to be available to remove cars blocking roads, and using modest perimeters around officers conducting enforcement to make safe arrests, Thompson said.

Yet despite Thompson’s ruling, a photojournalist was arrested at the Fairy Creek headquarters camp while on assignment Tuesday

Colin Smith, on assignment for Victoria Buzz, said he has been up to the blockades repeatedly and that journalists must still check in with media liaison officers, who escort them into the injunction zone.

While on scene, journalists were still corralled 100 feet away from where activists were being extracted from obstacles in the road blockade, he said.

Following the extraction, officers began to move forward en masse to arrest a group of protesters that had linked arms and were blocking the road, he added.

“And while documenting what was happening, I got arrested,” Smith said.

Smith was standing on a concrete barrier taking photos when an officer passed by, telling him to get down or he’d be arrested.

“There were blackberry bushes behind me, and I informed him I was media,” Smith said.

The officer said it didn’t matter, but when Smith informed him it did, the RCMP member grabbed the camera straps around his neck, pulled him down and had him arrested.

“I had cameras, a backpack and had signed in and was escorted there,” he said.

“I did what I was supposed to. You’d think that alone would be enough to prevent me from getting arrested.”

Police threatened to charge Smith with obstruction of justice and contempt of court for breaching the injunction, but he was released without charge from a nearby processing zone about an hour and a half later.

Returning to the area to retrieve a drone at the camp, Smith was denied entry by police and had to leave hours later without the expensive equipment.

Eventually, it was returned to him by other people who found it at the Fairy Creek headquarters camp.

It appears that police are still looking to curtail media covering events at the blockades, Smith said.

“Of the 20 times or so I’ve been to Fairy Creek, Tuesday was the worst experience,” he said.

“Either the RCMP officers on site Tuesday have not heard about the recent court order, or they don’t care.”

The RCMP did not respond to requests by Canada’s National Observer for comment around Justice Thompson’s decision or allegations officers weren’t adhering to it.

Aside from all the other

Aside from all the other stuff, I've never really understood what makes it OK for the RCMP to rob people. Anyone they're hassling, whether it's arrestees or homeless camps, they routinely just take their stuff--not as evidence of anything, just because. The fact that usually they don't keep it but rather do stuff like dump it in the trash somewhere is irrelevant to the act of theft--they violently rob people of their stuff and never give it back. If I tried that I'd be in jail.

That "obstruction of Justice"

That "obstruction of Justice" is the one that gets the most laughs from me. Justice?