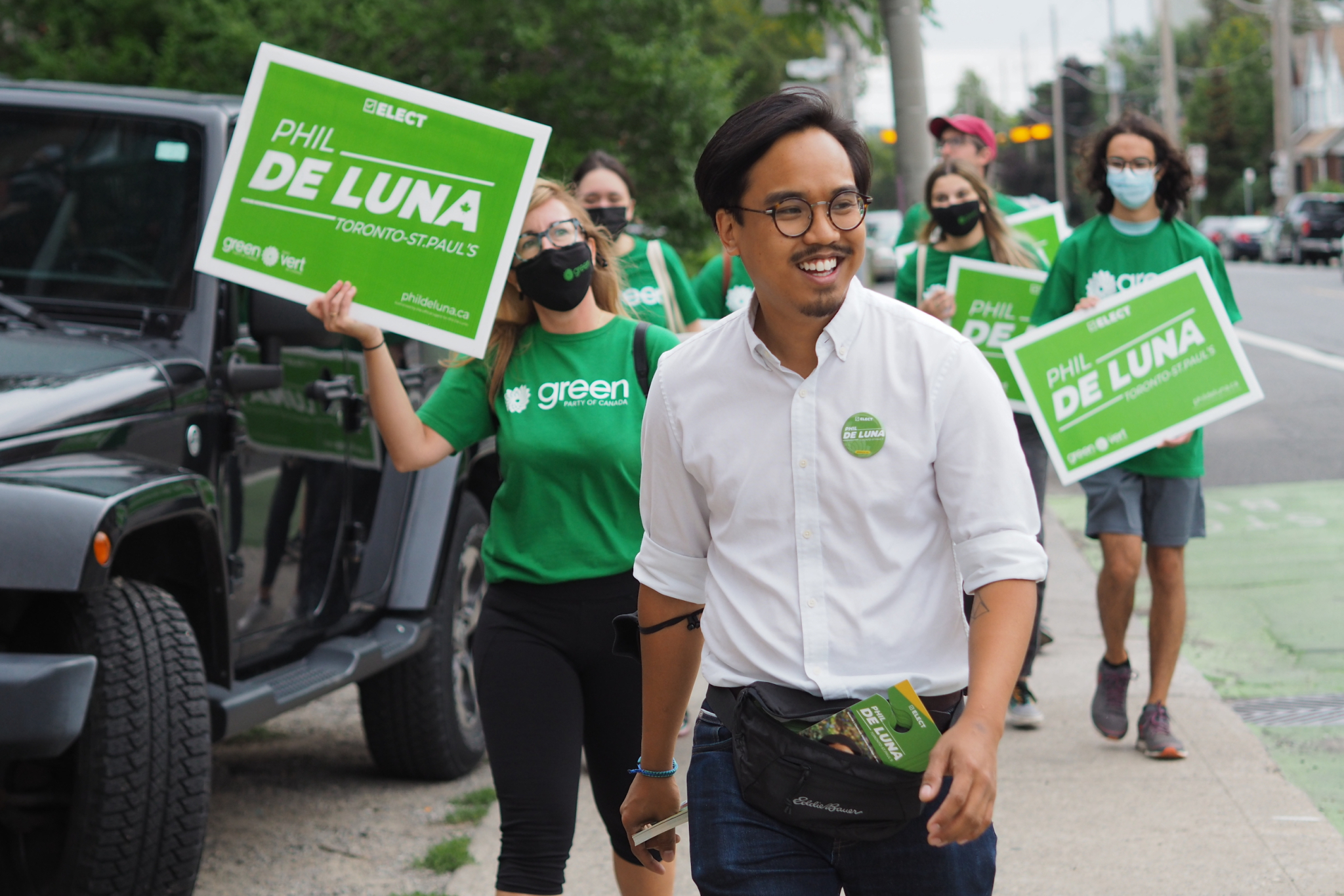 In the unlikely event Phil De Luna is elected in next week’s federal election, he says his first legislative action would be to push for all MPs to receive scientific literacy training.

The 29-year-old Green Party candidate for Toronto-St. Paul’s says a dearth of understanding about how science works among politicians is holding Canada back when it could be used to create policy solutions.

“If we are able to have that training, we'd be able to tackle a broad range of problems — not just the climate but in social inequality, in health care, in national security, in innovation policy in general — in a more cohesive and coherent way,” De Luna said in a phone interview with Canada’s National Observer.

The young candidate, who took a leave of absence from a National Research Council role in April in order to run, says much of the technology needed to sharply curtail our contributions to global warming are within our grasp but hindered by politics.

“The gap is in political will, it's in policy, and it's in action,” said the researcher, who stepped away from leading a $57-million program to develop new clean technologies to join the fray. “I know exactly what it takes to take technology out of the lab and into the marketplace. I know what we need to do to get to net-zero.”

De Luna is up against Liberal incumbent Carolyn Bennett, a cabinet minister in the last government who has held the seat since 1997.

De Luna and his campaign team also know how to work with what they’ve got; building a bespoke web-based canvassing app to identify the neighbourhoods with the most potential Green voters in the riding that runs just north of Dupont Street up to Eglinton Avenue.

He says that the app and other no-code tools have helped him run a campaign with just over $40,000. In fact, the team decided to stop accepting campaign donations more than a week ago, encouraging supporters to instead give to relief efforts in Afghanistan.

He has also shared much of what he has learned on the campaign trail in a series of videos (including on how to become a candidate, how to canvass, and how to look after your mental health in the process).

De Luna, who has completed a PhD in materials science and engineering at the University of Toronto, said he knows how privileged he is to be able to take six months off work to campaign and hopes to lower barriers to politics for candidates who would otherwise find it difficult to get involved, including youth.

Phil De Luna is up against Liberal incumbent Carolyn Bennett, a cabinet minister in the last government who has held the Toronto-St. Paul's seat since 1997. #elxn44 #cdnpoli

“There are so many other young people who need to have their voices heard in Parliament who aren't in that same position that I am,” said De Luna, a first-generation Filipino-Canadian. “And so I feel it is incumbent upon me to run and to elevate the conversation, to advocate for more science in politics. It just felt like this was the moment.”

De Luna says he considered running for other parties but chose the Greens not only because he supported leader Annamie Paul, who recruited him personally, and the party’s platform but also because he is impatient to make a difference and the Greens offered the most direct path to do so.

“I'm a startup person, I'm an underdog. I like small teams and being agile,” he said.

De Luna said he would like to see Canada make more use of private-public partnerships to help shift green technology innovations from the lab to the marketplace, and for federal scientific funding to be made available for longer than the typical three- to four-year timeline that limits the ability to plan for the long term.

“We need to stop doing these Band-Aid measures and these announcements that are, quite frankly in my view, done politically to buy votes,” he said.

He said the primary difference between the COVID-19 pandemic and the climate crisis is the timeframe on which they play out, with a lag of weeks between infections and deaths from the virus and a gap of several years between carbon emissions and the rising temperatures and more extreme weather they create.

“The problem I think primarily with humanity is the short-sightedness due to the competing priorities in our daily lives,” he said. “But if we can come together as governments, as societies to address this crisis, then the cost is minimal to have to adapt to this before it's too late.”