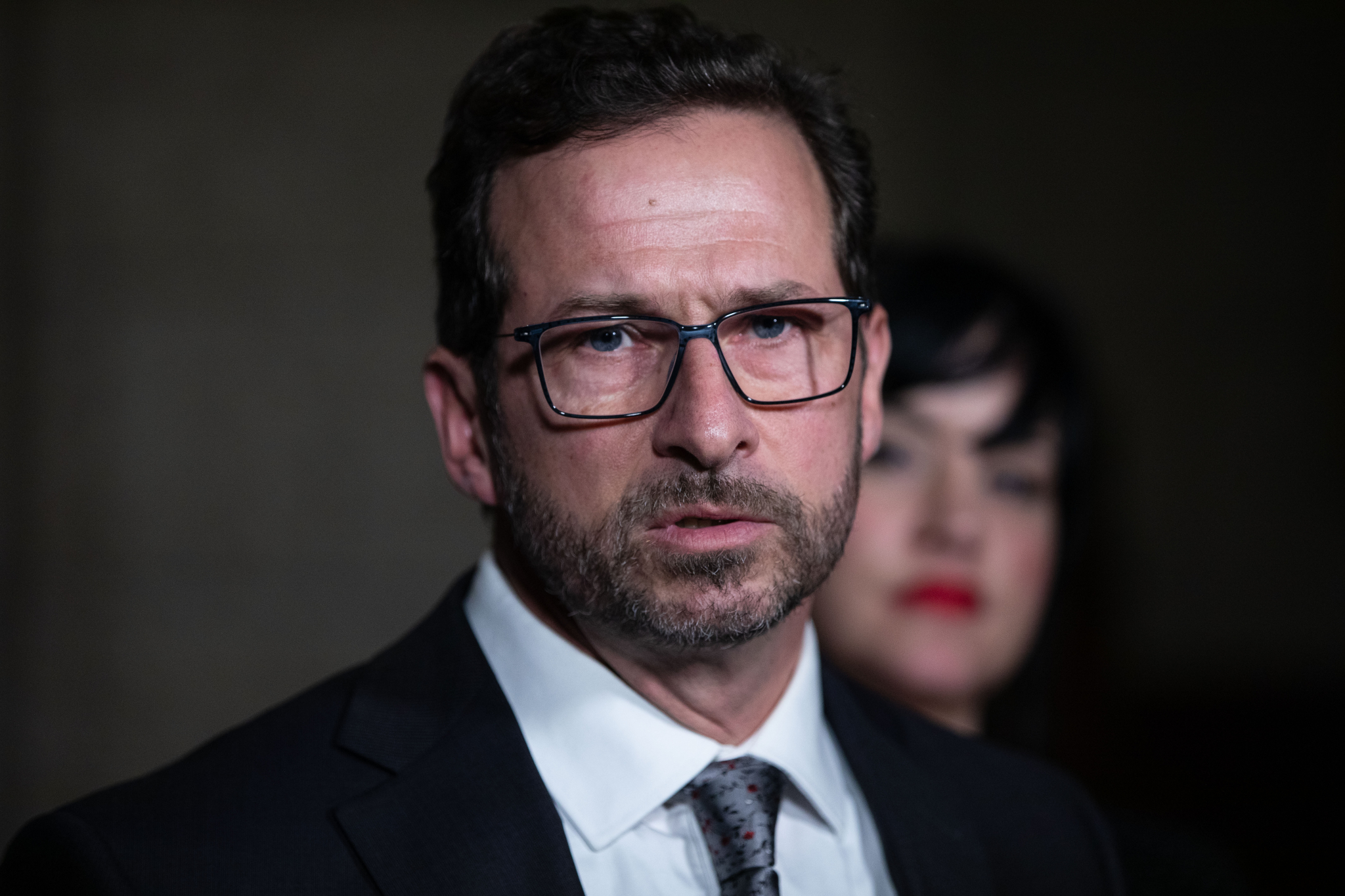 Bloc Québécois Leader Yves-François Blanchet, whose party had been sinking in the polls, clearly sensed an opportunity to play the victim during the leaders' debate, writes columnist Max Fawcett. File photo
Previous story

Whether you liked her performance or loathed it, there’s no question that Shachi Kurl made an impression as the moderator in the English language federal leaders’ debate on Thursday. But while her aggressive approach to keeping the politicians in line raised eyebrows in the moment, it’s the fallout from a question she asked Bloc Québécois Leader Yves-François Blanchet that may have real staying power. And if recent polls are any indication, it could change the course of the election.

In her first interaction with the BQ leader, Kurl got straight to the point. “You denied that Quebec has problems with racism,” she said, “yet you defend legislation such as bills 96 and 21, which marginalize religious minorities, anglophones and allophones. Quebec is recognized as a distinct society, but for those outside the province, please help them understand why your party also supports these discriminatory laws.” Shots fired, as the kids might say.

Blanchet, whose party had been sinking in the polls, clearly sensed an opportunity to play the victim — and he took it. In the aftermath of the debate, he complained about the “heap of insults” thrown in the face of Quebecers. “We were called racist and xenophobic by the host when we started the show,” he said. He wasn’t alone. In addition to any number of columnists in the province, all of whom seemed to take Blanchet’s side, Quebec Premier François Legault also joined the fray. On Friday, he told reporters that “to claim that protecting the French language is discriminatory or racist is ridiculous.” He also took issue with Kurl’s question by suggesting it was “an attack for sure against Quebec, against our responsibilities.”

Despite saying he “wouldn’t apologize for defending our language, our values, our powers,” Legault demanded an apology from the debate commission for Kurl’s question. None was forthcoming, although the commission essentially threw her under the bus by saying it wasn’t responsible for writing the questions. And while it’s nearly impossible to get federal political leaders to agree on anything, much less something of substance, they lined up behind the idea that Blanchet and Legault were right to feel aggrieved.

First, the facts. Asking a question about discriminatory legislation is not the same thing as saying all Quebecers are racist. That’s an obvious straw man, and it misses the more important — and more nuanced — conversation about legislation that clearly targets minorities. After all, a Quebec court found that Bill 21 does, in fact, violate the basic rights of minorities. The only reason it hasn’t been overturned is because the Quebec government used the notwithstanding clause to protect it from judicial oversight. Justice Marc-André Blanchard’s ruling also stated that the religious symbols ban for government employees couldn’t be applied to English schools. Funny, that.

As constitutional lawyer Julius Grey told the Montreal Gazette, “The truth is that those two laws are very, very questionable. We have to have courage and we have to speak even if speaking carries certain risks. I’m tired of the non-debate that you can’t discuss these things without a chorus of the indignant attacking you.” But for federal political leaders, those risks include losing a bunch of seats in Quebec — one that voters in that province have made clear. The nearly-dead Bloc Quebecois came surging back in 2019 after Prime Minister Justin Trudeau suggested during the French language debate that he “might” intervene when it came to Bill 21. One can only imagine what would happen if he used even stronger language than that.

That’s probably not going to happen before Sept. 20, though. On Sunday, Trudeau told reporters he wasn’t taking the option of intervening in court “off the table,” although it still seems awfully close to the edge. That’s better than Erin O’Toole, who admitted his government would never try to challenge provincial jurisdiction or laws, no matter how unjust or unfair they might be. But as former NDP leader Tom Mulcair wrote earlier this year, “Legault has a clear plan for pulling Québec away from, if not out of, Canada. That plan, as revealed by Legault himself, has three components: language, immigration and culture. He is running circles around our current crop of leaders in Ottawa.”

It’s not too late for Trudeau to channel his own father, who took a much harder line when it came to Quebec nationalists and their relationship with Canada. At some point, we need our federal leaders to stand up for Canada, not bend the knee reflexively to Quebec and its 78 seats. Yes, it may cost them some support in that province, and it might even jeopardize their ability to form a government. But what’s the point of governing a country that can’t stand up for itself, its values, and its responsibilities? Even François Legault knows the answer to that.

"It might even jeopardize their ability to form government?" No. Not acceptable then, because that sticks the country with the increasing subterfuge of the mafia-like conservatives, and at a critical time. It's not pointed out nearly enough how close Bernier of the "revolutionary" nutbar PPC came to leading that party. He hasn't even been vaccinated! AND they don't even "think" climate change is real! Which, again, is the VALID reason why an election was called as we stare down pandemic and climate change.

really good points. The scary thing is that Bernier might actually win some seats in Canada. This is scary stuff as the far right PPC is becoming more popular. Hope people are going to vote and are paying attention to what is happening.

Agreed in life, timing is

Agreed in life, timing is everything. Many folks in Quebec have a pretty big blindspot when it comes to those two bills. Very, very poor choices on the parts of both Kurl and Paul. There are such things as teachable moments, and that was not one of them.

Paul in particular was both smug and dismissive. Call Justin Trudeau a false-feminist? Whatever, Annamie. I'm sure that falls easily like water off a duck's back. But an anglophone implying an entire culture is racist? There are many words for that, none of them particularly flattering.

IMHO that broadcast, I won't call it a debate, was a hot mess.

What would have been helpful for Trudeau, had he been given the chance, to have been to have stood up for Quebeckers at that moment - they are not 'others' to be ridiculed, they are 'us' looking through a different cultural lens. One where a generation felt like they were second class citizens, "porter d'eau" (carriers of water), for the English elites in their own home land.

How much of that is true today? I don't know. But it certainly is used by separatists to polarize. One more kick at first-past-the-post: it encourages the politics of us and them and the use of wedge issues. And it amplifies regional differences: without it, Alberta wouldn't be near 100% conservative, which bears little resemblance to the popular vote, and the Bloc Quebecois, a pure regional party, likely wouldn't even exist.

"a Quebec court found that

"a Quebec court found that Bill 21 does, in fact, violate the basic rights of minorities. The only reason it hasn’t been overturned is because the Quebec government used the notwithstanding clause to protect it from judicial oversight. "
The Quebec government passed this law, not withstanding rights given in the Canadian Constitution and Bill of Human Rights.. It is pure identity politics, as is the whole "Quebec Nation" enterprise. It's way past time we abandoned identity politics as a mechanism for righting either real or perceived wrongs.

You make a couple of decent

You make a couple of decent points, but I think you push them too far when you get to what Trudeau should have done. Hmmm . . . which Quebeckers did you want him to stand up for? The problem here is that standing up for the Quebeckers with the power to pass discriminatory laws kind of requires kicking in the teeth the Quebeckers getting shafted by those laws. Unless we're starting from the position that those aren't "real" Quebeckers.

There's plenty racists in Canada whose first language is English, and plenty whose first language is French. Both groups like to pretend they're the real victims, not whoever they're stepping on. It seems like the latter have had a bit more success with their pretense, but it's the same gig whether the perpetrator is wearing a cowboy hat or putting on the pure laine.

What I notice about the Quebec response is that it completely sidesteps all mention of the actual victims of the laws; they become invisible as it all becomes about the poor affronted white Christian Francophone Quebecois. And your response plays along with that.

Agree completely.. my main point was that in life timing is everything and that broadcast was not the moment to do that - it was not, as they used to say in teachers college ‘a teachable moment’. If anything it had the opposite effect, making Blanchet a sympathetic figure in the eyes of some of those thinking fast and not slow.

I do find both of those laws abhorrent, as I do what I strongly feel is the abuse of the notwithstanding clause in upholding them.

It’s a blindspot, and a gaping one at that, and I have many friends who are even blunter than me about it.

It’s another example of ‘othering’, but the problem with othering the otherer is that it only hardens their positions.

In that moment, Trudeau coming to the defence might have opened the door a crack for better understanding on all sides. Instead we had a depressing, ridiculous snark fest. :(