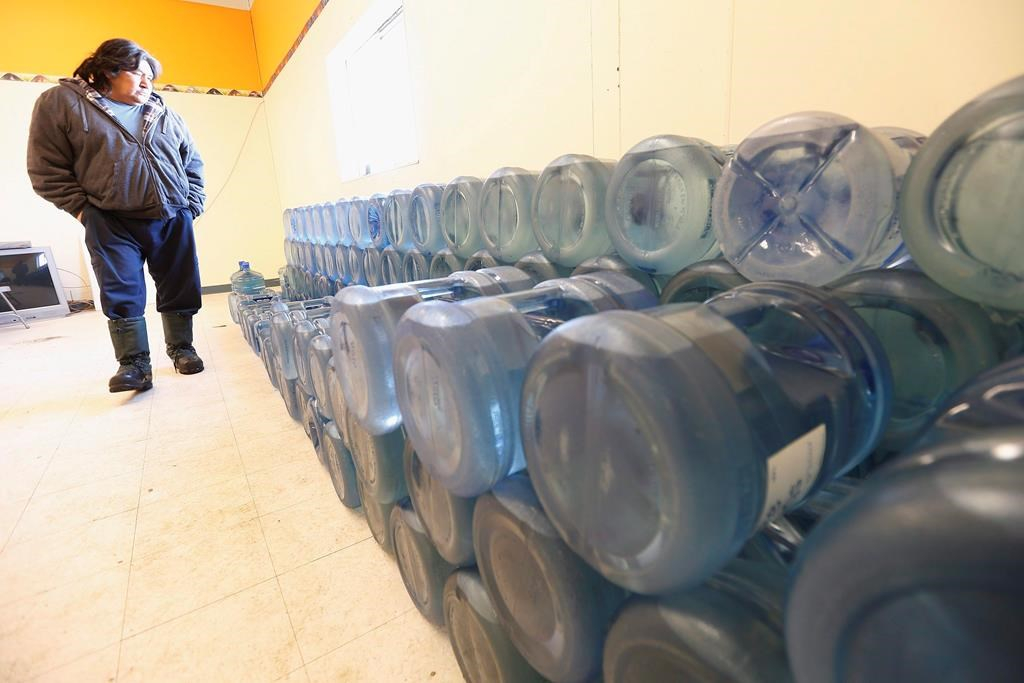 Angelina McLeod spent most of her life in Shoal Lake 40 First Nation watching her uncles and her father, Alfred Redsky, a former chief, fight for clean drinking water and a better way of life.

The moment came Wednesday when, for the first time in nearly 25 years, the water flowing through the community's taps was deemed safe to drink.

"It was like I was there seeing it for them," McLeod said in a phone interview.

McLeod's father died in 2013. She kept up his fight as a documentarian and eventual councillor for the Anishinaabe community on the Manitoba-Ontario boundary.

On Wednesday, the First Nation celebrated the opening of its long-anticipated water treatment plant with a special event, which included a tour of the facility.

A long-term boil-water advisory for the community, which was issued in 1998 and was one of the longest in Canada, was also lifted.

"It's the end of years of struggles trying to get the basic necessities of life, clean drinking water," said McLeod.

Shoal Lake 40 was cut off from the outside world more than a century ago during the construction of an aqueduct that supplies Winnipeg with its drinking water. The community's land became a man-made island, only accessible by a ferry in the summer and a dangerous ice road in the winter.

McLeod's mother died when a canoe she was in capsized as she was trying to get back home on the island.

McLeod, 43, said her family's home didn't have running water and many households had to rely on bottled water. It wasn't until she left the community that she realized it wasn't normal.

She said being isolated on the island without clean drinking water took a toll on her mental health.

"When I started learning about the outside world, when I was growing up, I started feeling less than who I was," McLeod recalled.

She said some members also began to experience health problems due to what they believe was the water.

The community advocated for years for an all-season transportation link and, in 2019, what became known as "Freedom Road" was completed. Construction on the water treatment plant began soon after.

Federal Indigenous Services Minister Marc Miller was in the community Wednesday for the celebration.

"The people of Shoal Lake 40 have fought hard for this day," Miller said on Twitter.

Today, I am in Shoal Lake 40 to witness the lifting of 7 Long Term Water Advisories (LTDWA). The people of Shoal Lake 40 have fought hard for this day. But it is also unacceptable in Canada that communities such as Neskantaga First Nation continue to be under a LTDWA. #cdnpoli https://t.co/ZniCi2MUGJ

Miller and Chief Vernon Redsky were the first to test the water when they toasted at the opening, McLeod added.

"They said it tasted good," she said with a laugh.

Federal Liberal Leader Justin Trudeau spoke on the election campaign trail Tuesday about the advisory being lifted. He said his government is still committed to ending long-term boil water advisories, a promise the Liberals first made during the 2015 election campaign.

"Indigenous people who have lived on that land for generations and millennia can't drink the water. We're fixing that," Trudeau said.

Numbers from Indigenous Services Canada from Aug. 28 show there were 51 long-term drinking water advisories in 32 communities. Some 109 advisories had been lifted since November 2015.

The community also celebrated the opening of the brand new Harvey Redsky Memorial School, a kindergarten to Grade 8 school, named after a beloved band member and former custodian in the community.

McLeod spearheaded the project. She said she also has her sights set on building its first high school, and with the new water treatment plant finally in place, she believes it's just the beginning.

"Everybody has hope for the future."

By Brittany Hobson in Winnipeg

Everything in these stories

Everything in these stories today except the price. Normally the feds are at pains to brag about how much they spent to do something. I had to google around, and find that the Freedom Road that made this possible at all cost about $46.1 M. The estimate for the plant was $15M, but they were sure it would rise. If it was over $18M, then the total was over $64M

...for about 641 persons served, that is, an expenditure of $100,000 per person to get this finally done. Not saying it wasn't due, but I think it's fair to point out that this was done at heavy public expense.

I was a little ticked at a Canadaland podcast the other day, that was very focused on how all communities still did not have drinking water, zipped past a note that the number has dropped from about 150 to about 100 since 2015. A little acknowledgement that difficult and expensive engineering projects now are getting done.

The numbers aren't surprising, by the way, not unusual. There was much rejoicing that Ontario Hydro completed the Witwaskineyap (I think I typed that right) power project to run a circular power line around 22 FN communities in Northern Ontario, giving them reliable power. (If a transmission line goes around a circle, then any one break can't deny power to communities in the middle.)

It was $16B, for well under 16,000 persons in all 22 communities put together, so over $100,000 each. (They actually could have put in "green power" solutions instead, wind turbines and hydrogen generators, for that that price...but Ont. Hydro is very good at doing power lines, not research projects that might become maintenance problems.)