Once considered trash, used tennis balls are being sold to raise money for eye health 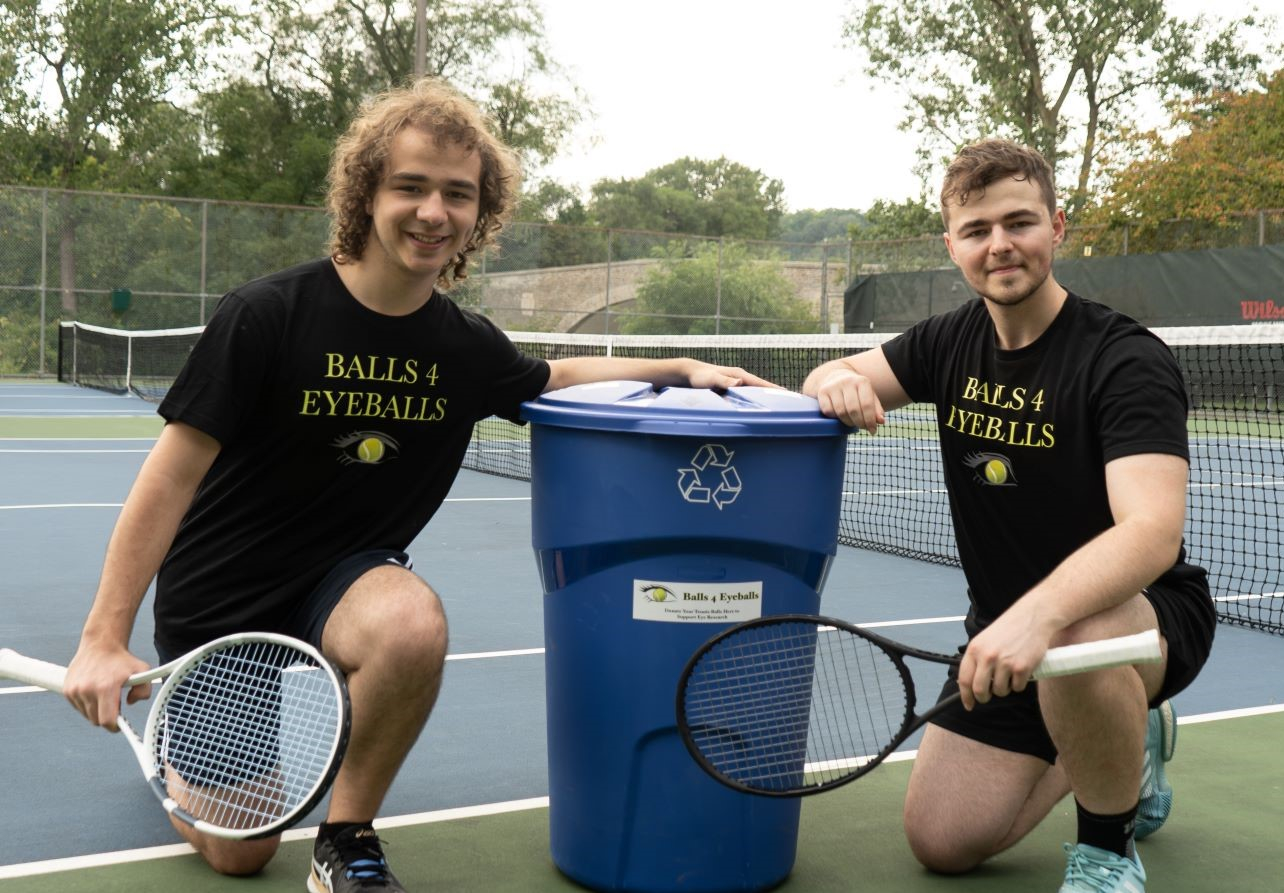 Cooper Waisberg (left) and his brother Ethan (right) are co-founders of Balls 4 Eyeballs, which collects used tennis balls and resells them to raise money for eye health. Photo submitted by Cooper Waisberg
Previous story
Next story

As part of a series highlighting the work of young people in addressing the climate crisis, writer Patricia Lane interviews Cooper Waisberg, a young man raising money for the blind by repurposing used tennis balls previously headed to the landfill.

Cooper and Ethan Waisberg love playing tennis almost as much as they love their grandmother. After she was diagnosed with glaucoma and faced potential blindness, the brothers wanted to help. Ethan is a medical student and passionate about better global eye health. Nineteen-year-old Cooper is a student who spent his 18th birthday delivering groceries to blind people. He worries about planetary health and hopes to make environmental law one focus of his career. Together, Ethan and Cooper set up Balls 4 Eyeballs, an initiative to repurpose some of the 300 million tennis balls a year that end up in landfills and raise funds to help fight blindness.

I chatted with Cooper Waisberg at the end of his exciting summer spent organizing Balls 4 Eyeballs, which saw him driving around Ontario collecting used tennis balls.

Anyone who plays tennis loves the sound, and smell when a pressurized can of new balls pops open. But serious players know new balls lose some of their bounce within a couple of hours. In many cases, that means a new tin of three balls each time. But what happens to the used ones?

At first, my grandmother’s eye disease and my older brother’s interests in ophthalmology seemed entirely unrelated to tennis. But we were raised to be careful about throwing things away, including tennis balls, which last 400 years in a landfill. Ethan inspired me to collect used eyeglasses from my fellow high school students so he could take them on overseas medical eye health missions with Medical Ministry International. It felt really good to know that these perfectly good eyeglasses were making other people’s lives better. I wondered if we could find a way to market recycled tennis balls and donate the money to eye health, in honour of our grandmother.

"Follow your passions. Small contributions add up to big changes. If tennis is your passion, come help us build Balls 4 Eyeballs and make this a youth-led movement much bigger than ourselves," says Cooper Waisberg. #EyeHealth

We asked local tennis clubs and a tennis store if they would collect used balls, which we would resell at a much lower price than new ones and use the proceeds to help fund eye health. The response has been overwhelmingly positive!

We have over 30,000 balls in our garage and basement now and our task is to expand the markets for them.

We have buyers from local schools who place them under chair legs for quieter classrooms, and from cricket and baseball communities who love using balls to practise.

Tennis players also use them to practise serving for their ball machines, and for kids or beginner lessons where lower ball pressure doesn’t matter. Used tennis balls are also great for gym classes and ball hockey. Pool owners use balls to trap surface oils. And inside the home, tennis balls can be used to childproof sharp edges, protect floors from furniture scratching, remove scuff marks and reduce toilet water use by floating one in the tank. Cut open, they make great jar openers and, with a little imagination, cool wallets.

What makes this project hard?

We need to help raise awareness that tennis balls should be reused. In some places, lightly used tennis balls with many other potential uses are being ground into crumb rubber for tennis or riding courts and artificial turf and playgrounds. This makes no sense! Tennis ball production leaves a huge environmental footprint with its rubber, petrochemicals, glue, and other toxins. Grinding these up into crumb rubber allows these toxins and microplastics to be released into the environment. Given the environmental hazard, we are much more interested in promoting reusing balls.

How did the way you were raised impact you?

One summer when I was just five years old at a tennis camp, we started throwing used tennis balls into the garbage for fun. Our coach stopped us and showed us how to use tennis balls to make fun crafts, such as people or animals (gluing eyes, hats, ears, etc. on them and decorating them), wreaths, and cutting slits in them to make coin-holders. He let us take some home and suggested we use them for driveway hockey, baseball, and for our pets. I didn't realize it at the time, but this lesson deeply affected me.

I think too many people are not aware of the urgency of the environmental crisis we face.

It feels great that so many people are so enthusiastic about our project and want to help.

Is there anything you would like to say to older people?

Your advice and wisdom are helpful to younger generations, although we may not always appreciate it at the time. Don't be afraid to give us much-needed guidance.

Follow your passions. Small contributions add up to big changes. If tennis is your passion, come help us build Balls 4 Eyeballs and make this a youth-led movement much bigger than ourselves!