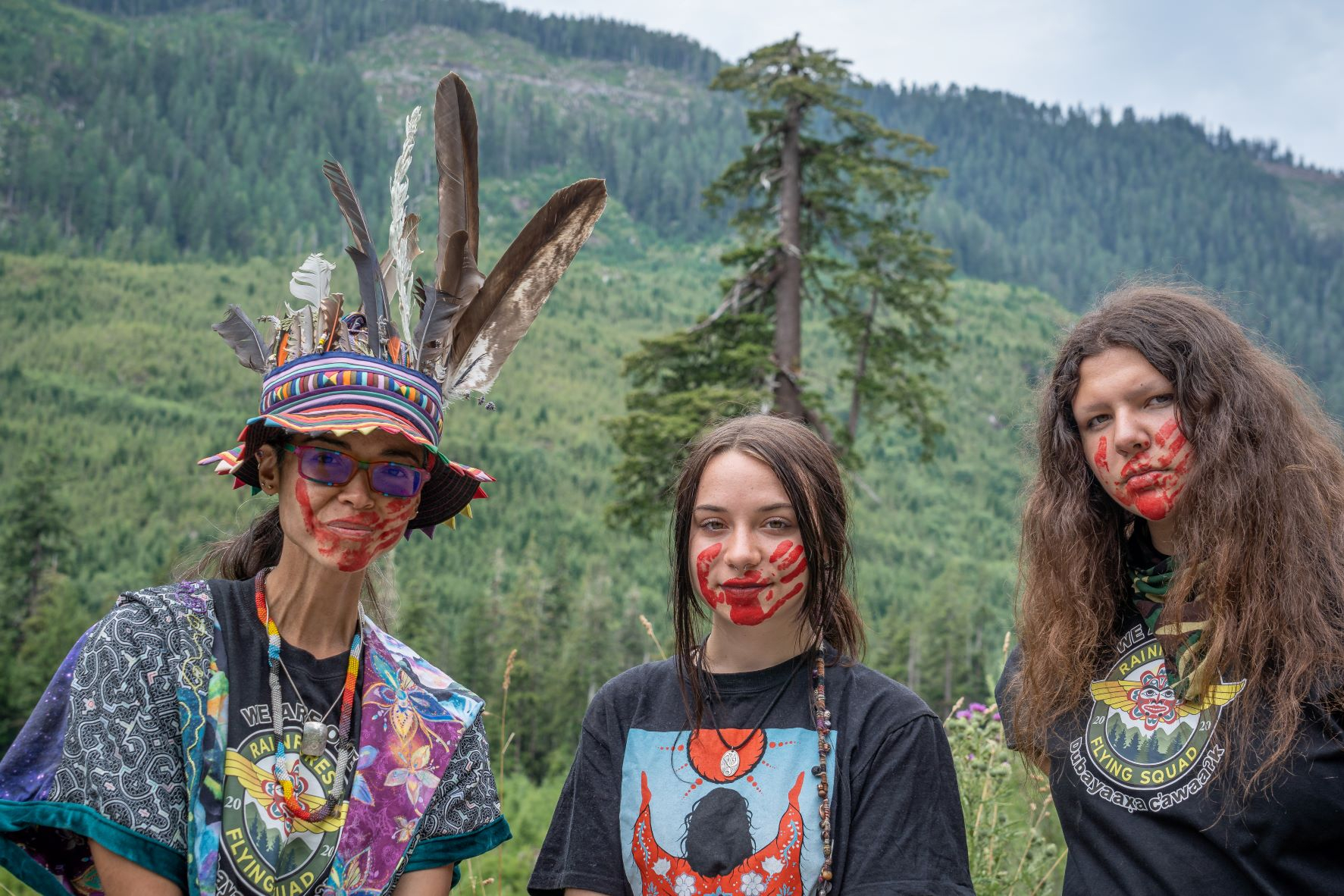 Rainbow Eyes, Sage, and Ojistoh wear red paint to remind us of Canada's missing and murdered Indigenous women and girls; Big Lonely Doug is the lone old-growth tree standing in a clear-cut. Photo by @focus.wandering
Previous story
Next story

As part of a series highlighting the work of young people in addressing the climate crisis, writer Patricia Lane interviews Rainbow Eyes, an Indigenous forest defender on the front lines of the Fairy Creek blockades.

Rainbow Eyes (Angela Davidson’s Fairy Creek camp name) has rebuilding, resilience, and relationships in her DNA. A member of the Da'naxda'xw-Awaetlala First Nation near Knight Inlet on Vancouver Island, Angela believes it is her responsibility to defend the Fairy Creek watershed from old-growth logging. She has been arrested numerous times, and in May 2021, was the first to be jailed. I chatted with her at Fairy Creek on Aug. 8, 2021, a day before the movement’s one-year anniversary.

Tell us about your work at Fairy Creek.

Pacheedaht elder Bill Jones, under the direction of hereditary Chief Victor Peter, invited me to show up for his people whose land is being so recklessly logged. Clear-cutting forests disregards the rights of his people to hunt and fish on these lands. This is not land I recognize as belonging to the Crown. It certainly does not belong to Teal-Jones (the company logging in the Fairy Creek area). This land gives life and meaning to elder Bill Jones and hereditary Chief Victor Peter, and the Pacheedaht youth and matriarchs who are camped out at Fairy Creek (and) who have dared to speak out even though the B.C. government’s agreement with the nation gives them only a small share of the profits, and only if they refrain from criticism or opposition. These forests breathe and sink carbon for the entire planet, including humans. There is more biodiversity here than in the Amazon. Just as we feel a sense of tragic loss of something precious when the Amazon is destroyed, people in Peru feel a loss when we clear-cut at the headwaters of Fairy Creek. These lands belong to themselves, the fish and wildlife they interact with, and also to all of us.

Tell us about your arrests.

Just as we value our human elders for their wisdom, these ancient trees, some 1,500 years old, house the biodiversity to seed and nurture new forests. Science is now showing what Indigenous people have always known. Trees have their own intelligence, and we have much to learn from them. But because they produce easily millable wood, they are cut down, and now less than three per cent of the trees that remain are truly old. I would defend my grandparents to the death, and I am using my body to delay the death of these beings.

Rainbow Eyes, a land defender at #FairyCreek, has rebuilding, resilience and relationships in her DNA. #oldgrowth #BCpoli

For example, I had myself locked to an industry gate, with a bike lock around my neck and my arm locked underground together with another defender. The time it took for the RCMP to extract me extended the life of some mother trees.

Because this slows industrial profit-taking, we are arrested and jailed.

You were the first to be jailed. Tell us about that.

I couldn't promise I would not return to Fairy Creek. In our culture, when an elder invites you to do something, it is disrespectful to refuse. So I was charged and had to appear in court the next day, which meant a night in jail. I was disoriented because they took away my glasses, so I couldn’t see. They gave me a blanket, but I was not allowed to cover my face to block the light, so I didn’t sleep. I was scared, too. What if I did not have the courage I needed? The next day, the judge said I could be released without signing if I put every penny I have in my bank account as bail. I will get it back, though, when I show up for trial. I am not a flight risk. Indigenous people belong to the land.

What draws you to be here?

Ten years ago, I got cancer. It focused my mind and clarified my priorities. Fairy Creek is not my traditional territory, but for decades, Indigenous people all over the island have been asking that old-growth logging stop. When I heard elder Bill Jones’ invitation, I had to respond. This is where the line gets drawn, and my body is on it.

Who are your inspiring heroes?

All my grandparents have always been there for me. But my paternal grandfather, William Glendale, gave me back my heritage. In the 1950s, the government stopped providing school teachers for our village. Even the smallest children had no option except residential school for education. Rather than let that happen, the entire village relocated, disconnecting us from the land. It was extremely disruptive, and in the ’80s, when the last residential school closed, my grandpa argued that the government should support us to rebuild. For 20 years, his arguments fell on deaf ears, but after the Aboriginal Peoples Television Network did an exposé on the nation’s efforts to return to their original lands, they finally listened. He and his brother and cousin rebuilt the Da'naxda'xw-Awaetlala Nation’s longhouse with their own hands, and we began to come home. Now we are a thriving community and the youth are learning the traditional ways. My grandfather taught me rebuilding is always possible and always worth doing.

What makes it hard to be at Fairy Creek?

The anger when the RCMP act unfairly can sometimes be turned against other friends. I see my role as helping to unite us here with the five other blockades in B.C. This is hard work. We are Asian, African, European, Indigenous, two-spirited, old, young, each with different ideas and talents. But the trees have much to teach us about how to build mutually beneficial societies. Elder Grandma Losah teaches us we are already Rainbow Nation. We are people with such integrity, surrounded with such beauty. If we let it in, it will keep us together.

Buying stuff will not set you free. The elders teach that we are part of a system that tries to convince us that consumerism is the key to happiness. The truth is our relationship with, and understanding of, nature is our salvation.

Thank you. You did the best you could, and now you are supporting us to do the best we can.

Footnote: On Aug. 10, 2021, two days after this interview, Rainbow Eyes was arrested for the fourth time as she provided food and sang to blockaders. She was detained without her medication and later released without further charge.

These people are having a

These people are having a nice time at a social occasion, and I commend their energy and morals. But not their effectiveness. A social and networking/team-building occasion for the activists is all that's being accomplished here.

The journalists, instead of tying themselves in knots trying to get access to scenes of physically-dramatic "action" (catnip for journalism, which is why most activists choose these dramatic gestures)...maybe they could just sit at a comfortable desk, and work their way down the supply chain, and tell us what lumber products to boycott.

I've got no idea, after all these months of coverage, what store their products end up in. Are all sales foreign? Can we boycott some foreign furniture or other wood products, then? Take legal action against some of the wood buyers? Shame them, at least?

All I know is that the show - even with face-makeup added - is not working.

Agreed that what the

Agreed that what the journalists are doing is largely performative, but you have to respect people who are willing to put their bodies where there mouth is, even when you totally disagree with their goals. The 18th century really is over and there is no room in Canada for 38 million people to live off the land like Rainbow Eyes' ancestors - so that's not a solution to our current crisis. We're all here, and most of us have nowhere else to go, so we need to work it out, and that requires politics. And civil disobedience is a form of politics with a longer history than voting. So let's do both. If you think the so-called Liberals are less captured by predatory capitalism than the NDP, then vote for them (and good luck with that).

No, I have to respect results

No, I have to respect results. IT. IS. NOT. WORKING.

Continuing with something that isn't working, for long periods, raises the question if they are getting something out of it personally. Like a warm community, company of those who are Totally Moral And Righteous, like they are.

I see this with every protest: people hanging around at Occupy Wall Street long after the point has been made and the public-opinion indicators are actually trending down, the longer you clog up the public space; Dakota Access Pipeline Protestors who formed such a community there that they left behind 24,000 tons of garbage (fact; look it up) that the Sioux hadn't the resources to clean up, and had to beg the government to take out hundreds of truckloads of informal structures, lumber, plastic sheets, tons of human waste, before it thawed and contaminated the watershed. (Also, some dozen dogs abandoned by the camp.) The right-wing press had a field day with the clean up pictures.

I've come to believe that some people love protest camps. Whether they get the world changed or not.

And I still have no answers to my question about what to boycott. You don't bother large corporations by camping in the woods near the blue-collar workers. You hit them in the money.

Go for it, girl. Hogan the

Go for it, girl. Hogan the Horrible won't last as long with his extraction projects than you will with your philosophy . I'm not sure why he's more outraged of the desecration of a human memorial than he is over the destruction of a botanical marvel.