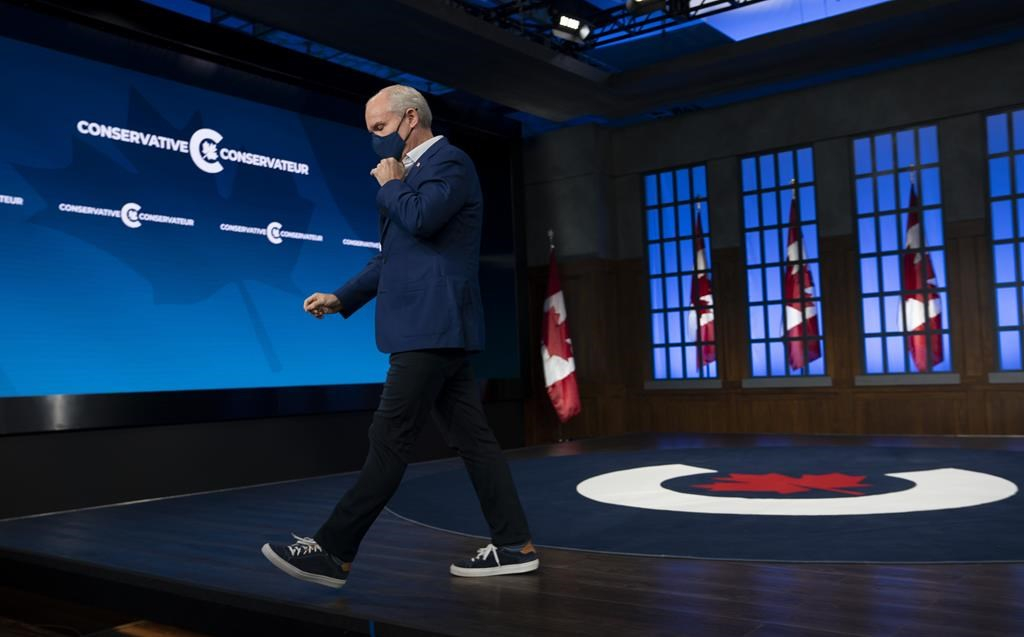 Erin O'Toole has repeatedly sidestepped questions about the discrepancies between what he said during his leadership race and the more centrist platform he ran on during the election campaign. Photo by Adrian Wyld / The Canadian Press
Previous story
Next story

OTTAWA — A Conservative who sits on the party's national council says Erin O'Toole should undergo an accelerated leadership review by members following his election loss, marking the first open challenge to him staying in the role.

Bert Chen represents Ontario, but says he's speaking as a loyal member and there are a lot of others unhappy with the more moderate direction O'Toole has taken the party, which was opposite to how he ran in its leadership contest to win over party faithful.

“If the decision by Mr. O'Toole paid off in forming Conservative government, I would have been more than happy to give him the benefit of the doubt had he been prime minister-designate,” Chen said.

“Considering that was not the case, I believe this needs to be done.”

In the leadership race, O'Toole campaigned as the “true blue” conservative, making promises like axing the Liberals' carbon price, only to introduce one of his own after winning.

The Conservative leader also appeared to reverse his positions on defunding the CBC and protecting the conscience rights of doctors from having to refer patients for services they morally object to, like medical assistance in dying or abortion.

O'Toole also created confusion when he inked a footnote into his platform on a promise to repeal a Liberal ban of some 1,500 models of firearms, including the AR-15 and the Ruger Mini-14, pledging instead to uphold their prohibition pending the outcome of a classification review.

Chen has started an online petition to collect signatures from members supportive of asking the party's national council to convene a referendum on O'Toole's leadership before a scheduled one in 2023.

He says an election could happen before then and ultimately it was members who elected O'Toole, so caucus should know how they feel.

“There are other councillors who are also getting the feedback from the members we represent in our provinces that this campaign was disappointing, and Mr. O'Toole needs to take responsibility for it,” said Chen.

Bert Chen has started an online petition to collect signatures from members supportive of asking the party's national council to convene a referendum on Erin O'Toole's leadership before a scheduled one in 2023. #cdnpoli #CPC #elxn44

So far, the petition has garnered more than 600 signatures. A request for comment from O'Toole's office was referred to the party's president.

“Canada's Conservatives have a clear process to ensure members have their say. At the first national convention following an election where the Conservatives do not form government, our constitution stipulates that there is a vote to determine if a leadership selection process will be engaged,” party president Rob Batherson wrote in a statement to The Canadian Press.

“At no time is an online petition, which is open to be influenced by Liberals or members of any other party, part of that process.”

The effort is the first public challenge O'Toole has faced as leader following Monday's election that has so far shown Conservatives winning 119 seats, two fewer than his predecessor Andrew Scheer captured in 2019.

O'Toole has acknowledged the party failed to make the gains it needed in the Greater Toronto Area, Metro Vancouver and Quebec, and committed to reviewing what went wrong.

He has repeatedly sidestepped questions about the discrepancies between what he said during his leadership race and the more centrist platform he ran on during the election campaign.