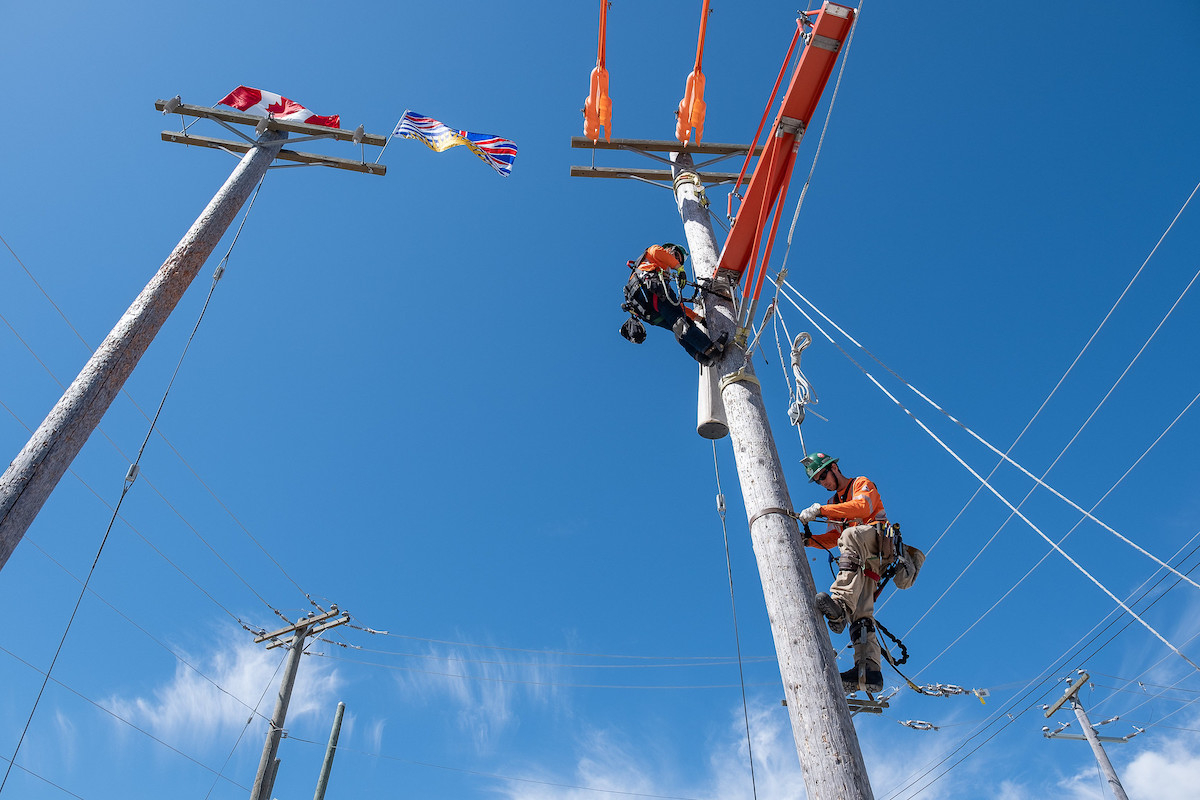 The Liberal government must keep its promise for a just transition for oil and gas workers, writes Cameron Fenton. Photo by Province of British Columbia / Flickr (CC BY-NC-ND 2.0)
Previous story

The 2021 federal election is over, and with a result that’s eerily similar to the 2019 election, the question now is: “So what does this actually mean?”

The short answer is that it means Canada still has a government that has committed to the Paris Agreement target of limiting global temperature rise to 1.5 C but is miles away from meeting that goal. And, just as it was before the election, it’s up to climate organizers across the country to change that. The good news is there are three big fights either already underway or just on the horizon where that change is possible.

The first is the Just Transition Act. Originally promised by Justin Trudeau at a campaign rally just days after the 2019 Climate Strikes, the legislation spent two years on the backburner. Then, just before this last election, Natural Resources Minister Seamus O’Regan finally announced some progress, rolling out a public consultation process and promising action on the act this fall.

With that consultation scheduled to run until the end of this month, there is a short but critical window to push for the kind of big, bold transition policies that we actually need. That means fighting for the Just Transition Act to meet the scale of the climate crisis by guaranteeing good union jobs for everyone impacted by the transition, ensuring the transition puts people ahead of corporate profit, and aligning our plans for a just transition with a managed decline of the fossil fuel sector that’s in line with the latest Intergovernmental Panel on Climate Change (IPCC) science.

The second big fight is going to be over Trudeau’s little-scrutinized promise this election to bring in oil and gas regulations meant to constrain that sector’s soaring emissions. A vague electoral promise, it’s not clear to anyone what Trudeau’s plan for these regulations are, but given his government’s record when it comes to cozying up to Big Oil, it’s hard to imagine them having the teeth we need to meet this moment.

According to the IPCC, the International Energy Agency (IEA), and countless other experts, we need to stop fossil fuel expansion and rapidly get to work on a plan to wind it down. These regulations, alongside a well-crafted Just Transition Act, could be critical to making that happen. But, if they’re too weak, filled with loopholes, or if they hedge too much on unproven, expensive carbon capture technology, they won’t be worth the paper they're written on.

The same will be true if they continue to perpetuate the fossil fuel industry-backed myth that fracked gas is some kind of a climate solution. Stopping that from happening is going to be a big lift.

Third, the Liberals need to reckon with their purchase of the Trans Mountain pipeline. Whatever you think about the TMX purchase in the first place, you have to accept that things have changed dramatically since the Liberals first bought the project. A few months after the Liberals acquired the pipeline in 2018, the IPCC released a landmark report on limiting global temperature rise to 1.5 C. That report laid out emissions reductions pathways that cast serious doubts on whether the Trans Mountain pipeline actually — as Trudeau argued then and still does now — fits in Canada’s climate plan.

These questions again came up with the release of the Canadian Energy Regulator’s 2020 energy outlook report showing that even with lower than promised climate actions, Canada doesn’t need the capacity of the Trans Mountain pipeline. And, they came up yet again with the IEA’s report on pathways to 1.5 C, the most recent “code red for humanity” IPCC report and a recent analysis from West Coast Environmental Law that shows the pipeline mired in delays. On top of all this, Trans Mountain has lost 16 insurers for the project, the vast majority pulling out because of the threats the pipeline poses to the climate and Indigenous rights.

The Liberals could deal with all this by actually learning something from Jagmeet Singh’s weak answers on Trans Mountain and coming out with a clear plan to formally review their decision to purchase and build the pipeline. With winter rolling in, a lot of construction on the expansion project will slow or stop in the coming weeks, and they could use that window to order a formal review of the decision to buy and build Trans Mountain.

Opinion: With the federal election behind us, there are three big fights either already underway or just on the horizon where change is possible in battling the climate crisis, writes @CamFenton of @350Canada #cdnpoli #elxn44

They could use that time to step back and look at what the pipeline is costing, both financially and in terms of our chances of tackling the climate crisis. Of course, though, that would require doing the one thing politicians seem hard-wired to avoid, admitting they were wrong, and so it’s not something that’s going to happen without a lot of public pressure.

At the end of the day, the clock on climate action didn’t stop ticking when Trudeau called this election. And, given the results that came in on Monday, you could be forgiven for seeing the last six weeks as wasted time when the government could have just been legislating action, instead of orchestrating a failed swing for a majority.

Whatever the case, we need to hit the ground running because, as a report that came out a few days before the election made clear, Canada’s climate plan is still “highly insufficient” to keep the planet from cooking. And, if this summer showed us anything, it’s that we’re running out of time to turn that around.

re: TMX: Would it satisfy

re: TMX: Would it satisfy climate warriors if, in the short term, oil and CO2 production in Alberta decreases but the diminished oil volume is exported to the world market at a better price (vs. the current captive US price) via TMX? The price differential would go some way to alleviating the income problem that diminished oil production means for the Albertan man in the street while the feds put in place a "Just Transition" program. It would also put upward pressure on the US price, sending a market signal to US consummers.

Any evidence overseas refineries are willing to pay more for AB crude than U.S. refineries do?
If higher prices exist elsewhere, why would AB oil producers not take advantage of such opportunities today?
Would AB oil producers voluntarily curtail production if their barrels could fetch higher prices elsewhere?
AB oil reaches tidewater at the Gulf of Mexico as well as the port of Vancouver. Overseas shipments of AB heavy oil remain few and far between. With the highest concentration of heavy-oil refineries in the world, the U.S. remains our best customer. U.S. Gulf Coast heavy-oil refineries pay top dollar for Alberta dilbit, just below the WTI price.
*
"The U.S. has 55% of the world's heavy oil refining capacity and heavy oil prices on the U.S. Gulf Coast are $3 higher than in Asia which, coupled with higher transport costs to Asia, means that oil transported to the U.S. via Line 3 and Keystone XL will capture a premium of $5 per barrel compared to Asia exports via Trans Mountain. The 'billions for Canadian priorities' are a figment of the government’s imagination."
J. David Hughes: "Fact-checking Alberta's pipeline ads" (Edmonton Journal, 2019)
*
No evidence Asian refineries are willing to pay more for AB dilbit than U.S. Gulf Coast refineries offer.
No evidence Asian refineries would prefer AB to its current suppliers.
No evidence Canada can compete with Asia's current suppliers on cost.
*
Middle East, African, and U.S. producers can export oil in the very largest supertankers. Shipping dilbit (30% diluent content) or refined products out of Vancouver in much smaller Aframax tankers filled to only 80% capacity (i.e., crude oil content at only half capacity) makes AB oil exports to Asia uncompetitive.
*
China will buy AB dilbit when it's dirt cheap but not otherwise. Long-term higher prices in Asia are mythical.
"China snapping up cheap Canadian oil, lured by $50 discount over U.S. crude" (Bloomberg)
"China has stopped buying crude oil from Western Canada after record purchase in 2018" (2019)
["...Statistics Canada confirms that in 2018, six million barrels of Alberta crude, valued at $441 million, shipped to China by tanker via the Port of Vancouver. The spike was likely driven by the steep discount on Alberta oil in 2018." (JWN Energy, 2019)
*
Most of the barrels transported by TMX will head to California.
While variable over time and space, the standard heavy-oil discount is global. No number of pipelines can overcome it. Heavy crudes that require more expensive refining processes and equipment are typically priced lower than sweet, light crudes.
AB oilsands producers ship to heavy-oil refineries in the U.S. mid-West and Gulf Coast. Often at a significant discount, due to higher refinery costs, higher transportation costs, and pipeline constraints.
The discount is minimal on the U.S. Gulf Coast, but higher in the U.S. mid-West, especially in event of flow restrictions after a spill or refinery maintenance shutdowns. The notion that Canadian oil sells at a discount (mainly) because we sell almost exclusively to one customer is not supported.

There have been further

There have been further developments since Climate Action Tracker rated Canada's efforts as highly insufficient. Climate Action Tracker states: "Canada did release a revised climate plan in December 2020, and has announced further measures this year, largely in its 2021 Budget. If Canada can successfully implement all of these announced plans, it would go a long way to closing the ambition gap and its rating would improve to “Almost sufficient”."

These announced plans include: Increasing the carbon price to $170 per tonne by 2030, 100% sales of zero-emission passenger vehicles by 2040, setting a new target for 2030 methane emissions from the oil-and-gas sector, reducing fertilizer emissions by 30% of 2020 levels (although it hasn’t said by when!), planting 2 million trees over the next 10 years, and taking a clearer policy stance against new or expanded thermal coal mining.

Now we need to encourage the government to not only follow through on this plan, but to strengthen it, and not do any actions that are counterproductive to solving the climate crisis. I've become more aware of how important food choices are, and the more we can transition to plant-based foods, the better. That is because animal agriculture is responsible for 79% of the land use, but only providing 18% of the calories. A transition to plant-based foods would free up 75% of agricultural land, and if this was able to revert back to nature, we'd have more biodiversity, less pollution, more ecosystem services such as flood control and clean water, and way more carbon stored in the vegetation and soil, which is a way to draw carbon dioxide out of the atmosphere, and reverse global warming. Also, this transition would mean a lot less methane, since cows are a major source of methane.