By Cloe Logan | News | September 22nd 2021
#2 of 99 articles from the Special Report: COP26: Uniting the World to Tackle Climate Change 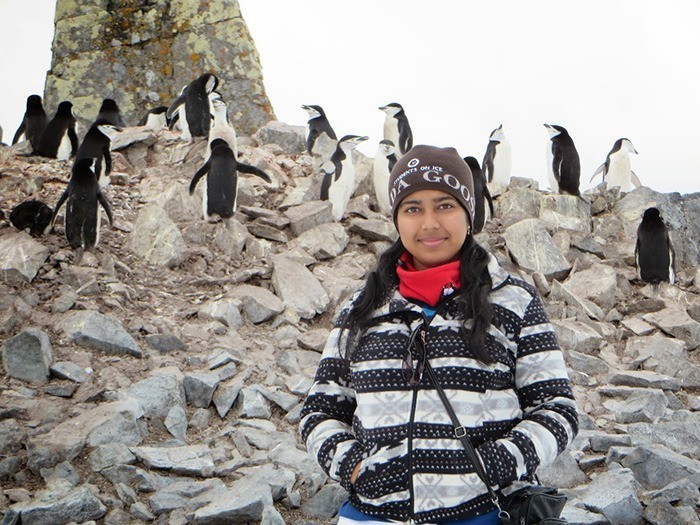 Vancouver-based youth climate activist Shakti Ramkumar is heading to Milan for the Youth4Climate summit ahead of COP26. Photo submitted by Shakti Ramkumar
Previous story
Next story

In less than a week’s time, Shakti Ramkumar will be in Milan, Italy, with hundreds of other young climate leaders.

The Vancouver-based youth climate activist is set to attend the Youth4Climate: Driving Ambition meeting, which takes place Sept. 28 to 30 in advance of COP26.

Participants will form working groups and discuss proposals on climate initiatives, including ways to create jobs in renewable energy, push countries to prioritize low-carbon action, and urge the fashion industry to reduce its climate footprint. Conference results will be shared with participants and decision-makers attending COP26, and inform the negotiation process at the conference.

It’s not Ramkumar’s first climate conference (she attended COP25 in Madrid, Spain), but this meeting feels especially important. She said she has heard concerns from other attendees (she’s in a WhatsApp group with over 300 of them) about not being able to make it to the event. Equity at COP26 has been centre stage — many worry the lack of access to COVID-19 vaccines and the expense of quarantine and travel for delegates from many countries mean the Glasgow-based event won’t be as fair or effective as it should be.

“I feel like before COVID, I would have been just like 100 per cent excited... This year, I feel 70 per cent excited, still very excited, but I also feel a bigger sense of responsibility this year than any other year, just recognizing how inequitable travelling is right now,” she said.

“And these conference spaces have always been a privileged basin because so few people can attend compared to the number of people who are advocating on the ground for these issues.”

With COP26 being called our “last hope” for meeting the world’s Paris Agreement goal, the role of youth is more important than ever. Canada’s National Observer caught up with some of the attendees and asked them for their thoughts on Youth4Climate: Driving Ambition and the larger picture of COP26.

The UN climate conference in November is being called our “last hope” to meet our Paris Agreement targets, and the role of youth is more important than ever. Here's what attendees of the upcoming #Youth4Climate are hoping to see at #COP26.

It’s the first time a youth summit is taking place before a UN climate conference, which is important, said Ramkumar.

“(In previous years), before anyone even arrived within that space, before the youth delegations even set foot in COP, a lot of the big decisions and the parameters for the discussion (had) already been set,” she explained.

It makes this timeline exciting, she said, and leaves her hopeful that youth perspectives will be worked into the COP26 agenda — something she and other delegates believe was lacking in the past.

Coming off the heels of a federal election makes Youth4Climate: Driving Ambition all the more timely for Ramkumar, who is concerned Canada might show up at COP26 without a clear plan to meet its Paris targets. Those feelings are coupled with questions around the government needing to support youth-led climate action and provide financial support for youth in the clean energy sector.

“In the Canadian youth groups I'm tapped into, there's frustration that front-line Indigenous climate activists have not been sufficiently heard by any party during this election, and that there's still not a clear pathway to actually meeting our targets,” she said.

Founder of The Cacao Project

UN Young Champion of the Earth

Louise Mabulo has seen and felt the climate crisis first-hand. Intensifying storms have affected her region in the Philippines, where the country sees an average of 20 typhoons each year.

For the chef, farmer, and entrepreneur, her lived experience ties into her climate advocacy. She started The Cacao Project, which connects farmers in her home city of San Fernando with resilient, long-term, and profitable crops, such as cacao seedlings, after typhoon Nock-ten destroyed over 80 per cent of permeable land in the area in 2016.

“... I can share my own experiences as someone who has witnessed the depth and devastation of the climate crisis first-hand in my region through the intensifying typhoons which my country experiences,” she said.

When thinking about the future of youth and climate conferences, Mabulo hopes there is an opportunity to expand ongoing dialogues, discussions, and working groups with youth year-round through the UN.

“... It is only natural that there is too much ground to cover on a topic as expansive as climate in a yearly event,” she said.

The event will serve as a place where young people can share their experiences, as well as climate goals they’d like to see reached, explained Jhannel Tomlinson, who served as the Jamaican youth delegate both for COP24 in Poland and COP25 in Madrid.

The 29-year-old is a PhD candidate in the department of geography and geology at the University of the West Indies whose work has focused on climate change adaptation in rural Jamaican communities. She sees the event as a vital way to bridge the gap between children and decision-makers.

“The young people of tomorrow will inherit a world that they didn’t create,” she said.

“Being the generation closest to them, it is important for us as youth to be able to advocate for the protection of the Earth, the conservation of resources, environmental justice for the vulnerable, and for economies that are less premised on extractive industries.”

When Nisreen Elsaim talks about what she wants to see come from the Youth4Climate meeting, as well as COP26, she says “intergenerational justice” is key.

“Even now, a lot of young people around the world are impacted by climate change.”

Elsaim hopes concrete plans to cut back on emissions and support communities dealing with climate change come out of the youth-focused event. She also wants to see a shift in the climate change movement towards taking young people seriously.

“They should not also be treated as a decoration ... we have our knowledge, we (are) professional, we should get invited to different events,” she said.

“(It should be) according to that, to what we can actually add to the event, not just to make it more diverse or just say that they have youth representation.”