By Cloe Logan | Explainer | September 17th 2021
#1 of 99 articles from the Special Report: COP26: Uniting the World to Tackle Climate Change 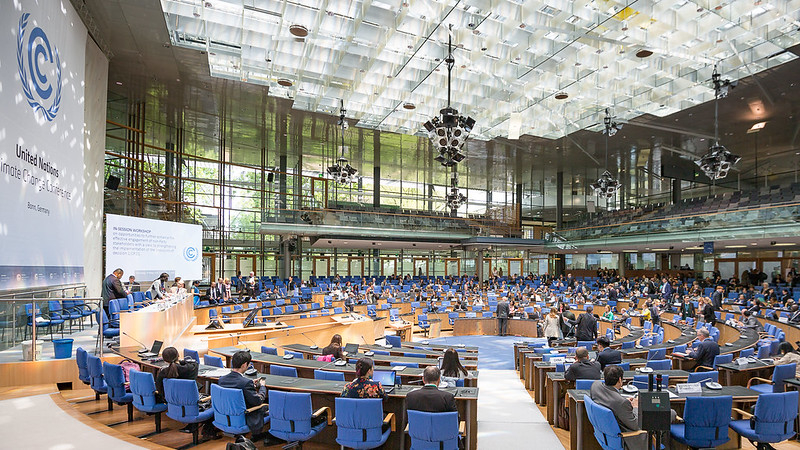 COP26, which many are calling the most important climate conference to date, is set to take place in Glasgow in November. Photo courtesy of UNclimatechange / Flickr (CC BY-NC-SA 2.0)
Next story

The United Nations climate conference sets the agenda on climate action around the world, and its results serve as the framework to hold countries accountable.

In the wake of a summer of intense heat, flooding, and wildfires, and amid an ongoing pandemic, some policy and climate experts are calling this year's conference, COP26, our “last hope” for meeting the world’s Paris Agreement goal. For Canada — the only G7 country other than the U.S. where emissions have risen every year since the agreement — COP26 could nudge decision-makers towards making fathomable climate promises.

Here's what you need to know about what’s on the agenda at COP26, why it matters, and what challenges stand in the way of this year’s event.

The United Nations’ yearly climate change conference — also known as COP, short for Conference of the Parties — has taken place since 1995. The talks gather policymakers, scientists, environmental activists, and climate experts from the 197 member countries of the United Nations Framework Convention on Climate Change to set and work towards global climate change goals. COP has been held every year for the past 27 years, except 2020, when it was cancelled due to the COVID-19 pandemic.

The meetings serve as a stage for countries to make commitments on climate change — promises they can be held accountable for by other countries and delegates. Each COP features talks from climate experts, panels with policymakers, and closed sessions with government officials who negotiate on global climate targets. At COP26, delegates are expected to finalize the Paris Rulebook, first set forward in 2015, and wrap up other important points from the United Nations Framework Convention on Climate Change and the Kyoto Protocol.

Past COPs have produced some key climate commitments: the 2015 Paris Agreement, which aims to limit global warming to 1.5 C, was adopted at COP21. The Kyoto Protocol, another landmark agreement promising to cut back on global greenhouse gas emissions, was adopted at COP in 1997.

In 2021, COP26 takes place at the Scottish Event Campus in Glasgow, Scotland, from Oct. 31 to Nov. 12. Tens of thousands of delegates from over 200 countries are set to attend. The U.K. will host the event and act as a joint organizer of COP26 with Italy. British Conservative MP Alok Sharma has been leading preparations as COP26 president since February 2020. His duties include organizing the talks, as well as chairing the Climate Action Implementation Cabinet Committee, which aims to get governments to net-zero by 2050.

The rise of the youth climate movement and growing awareness of the climate crisis have also spawned additional events. Prior to COP26, the Youth4Climate: Driving Ambition meeting will take place in Milan, Italy, from Sept. 28 to 30. Four hundred young people from across the globe are expected to attend the meeting, which will inform the negotiation process at COP26. Also before the climate conference, TED is set to host a virtual event on Oct. 30 featuring talks that will present “a real pathway to achieving net-zero.”

With #COP26 fast approaching, @NatObserver breaks down the who, what, where and why of the UN climate conference many are calling the most important to date. #ClimateCrisis

Why does COP26 matter, and why do some view it as our last chance to get on the right track?

COP26 represents a crucial opportunity to get the world’s climate action back on track. John Kerry, the United States’ special presidential envoy for climate, has called the meeting the “last, best hope” for the world to act on the climate crisis. Earlier this year, Pope Francis, the Archbishop of Canterbury, and the spiritual leader of Orthodox Christians published an open letter asking for climate talk participants to “listen to the cry of the Earth.” The Climate Vulnerable Forum, a group of countries dealing with the brunt of climate change, has said the event is essential to climate action this decade, and called for a “climate emergency pact” to be put forward at COP26.

Isabelle Turcotte, director of federal policy at Canadian-based think tank the Pembina Institute, says this round of climate talks marks the most vital milestone since the 2015 Paris Agreement.

“I know, we say this every time … that this is the big one, but this is the climate ambition-raising COP,” said Turcotte.

During the Paris Agreement, countries promised to update their nationally determined contributions — the emission-reduction targets and goals unique to each country — every five years. COP26 was delayed a year due to the pandemic, so countries are now a year behind on the first post-Paris milestone.

Having the conference already put off by a year also makes it more pressing, says Ian Bailey, a professor of environmental politics at the University of Plymouth in England.

Putting off COP26 has meant many countries, including some of the biggest emission contributors, such as the U.S. and China, have already submitted their updated climate goals, Bailey explains. Originally, countries would have run their goals past other participants, who would then encourage each other to strengthen their promises. However, with COP26 being delayed by a year, that now isn’t the case, and Bailey says many countries still “fall short” of the commitments necessary to meet the world’s Paris target.

What are the main goals of the conference?

It also provides some detail on how the world could move closer to net-zero, such as by accelerating the phase-out of coal around the world.

Funding for climate action — particularly the commitment from rich countries to provide $100 billion in climate finance per year by 2020 — will be a major topic of discussion at COP26. Canada is co-leading the development of an international climate finance action plan ahead of COP26 alongside Germany, which they say will help low-income countries deal with and fight climate change.

The G7 summit earlier this year — which included Canada, France, Germany, Italy, Japan, the U.K., the U.S., and the EU — failed to commit any new funding to address the world’s climate goals, and developing countries are urging rich nations to cut emissions faster and provide more financial support to poor nations vulnerable to the climate crisis. A September 2020 report from Oxfam found carbon emissions of the most wealthy one per cent were more than double those from the poorest half of the world.

Why are some climate activists calling to postpone COP26?

Calls to put off COP26 have been mounting in the lead-up to the conference, with over 1,500 environmental groups pushing for the event to be postponed due to the pandemic.

They worry the lack of access to COVID-19 vaccines and the expense of quarantine and travel for delegates from many countries mean the Glasgow-based event won’t be as equitable or effective as it should be. Although five billion doses of the vaccine have been administered across the world, only around 15 million of those doses went to low-income countries, many of which are on the U.K.'s “red list” — meaning unvaccinated individuals would need to complete a costly 10-day quarantine in a hotel.

Swedish climate activist Greta Thunberg has said the vaccine inequality problem means she likely won’t attend this year’s event, and that delaying the climate talks is the only feasible option. It’s too late to shift COP26 to a virtual format, she argues, noting inequity in access to the internet and computers.

“Inequality and climate injustice is already the heart of the climate crisis. If people can’t be vaccinated and travel to be represented equally that’s undemocratic and would worsen the problem,” tweeted Thunberg.

So far, the meetings are set to go ahead. On Sept. 10, COP26 announced some vaccines were sent out to delegates in poorer countries, and that a fund has been started to cover quarantine costs for those who will be required to isolate after travelling to the U.K.