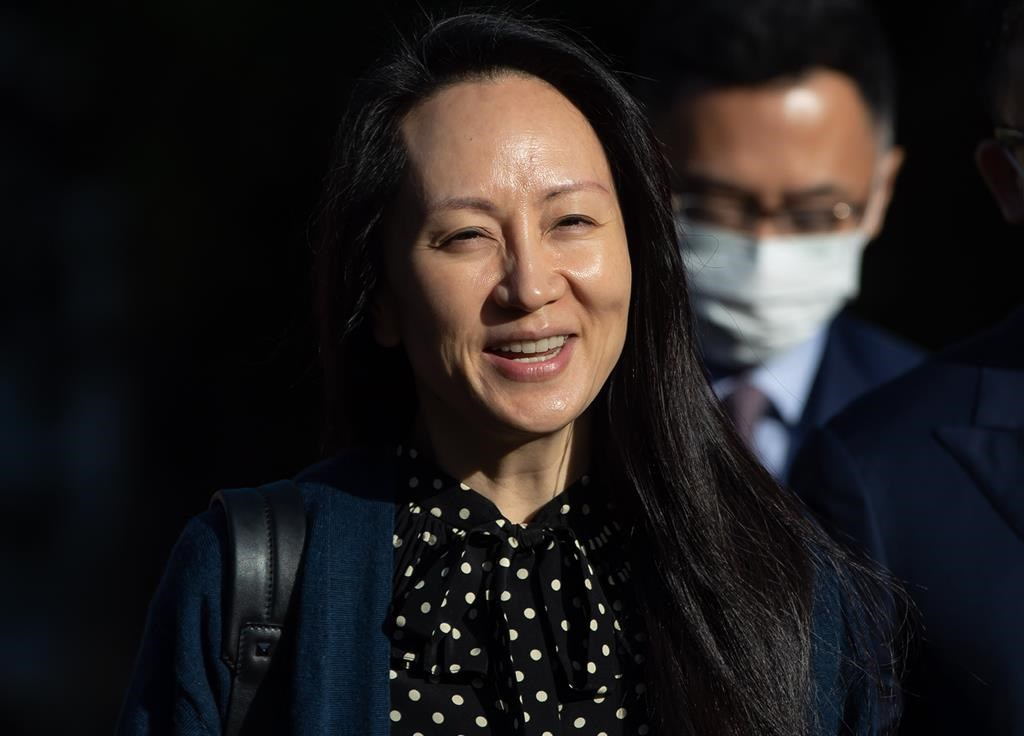 Meng Wanzhou, chief financial officer of Huawei, smiles as she leaves her home in Vancouver on Friday, September 24, 2021. THE CANADIAN PRESS/Darryl Dyck
Previous story
Next story

Prime Minister Justin Trudeau says Canadian citizens Michael Kovrig and Michael Spavor are on their way back to Canada after being detained in China for nearly three years.

Trudeau told a news conference Friday evening on Parliament Hill that Kovrig and Spavor, who have become known in Canada and around the world as the "two Michaels," were on a plane that left China, accompanied by Canadian ambassador Dominic Barton.

"We have worked tirelessly for the past two and a half years to get them home," he said.

"I know Canadians are very happy that these two citizens that we've thought of so many times over the past 1,000 days are now on their way home."

The news came hours after Chinese telecom executive Meng Wanzhou walked free out of a British Columbia Supreme Court, when a judge agreed to a discharge order that withdrew a U.S. extradition request against her.

The Huawei executive was originally detained in Vancouver in December 2018 at the behest of the U.S., where a 13-count grand jury indictment accused the company and Meng, the daughter of the company's founder Ren Zhengfei, of misrepresenting their ownership of Hong Kong-based subsidiary Skycom between 2007 and 2017 in order to circumvent American sanctions on Iran.

Meng's discharge followed a virtual appearance in a New York courtroom where she pleaded not guilty to all charges and the judge signed off on a deferred prosecution agreement.

China has publicly maintained that there was no connection between her case and the two Michaels' imprisonment, but had also dropped broad hints that if she were allowed to go free, that could benefit the two Canadians.

Assistant U.S. attorney David Kessler told the New York court the agreement would allow for the charges against Meng to be dismissed after Dec. 1, 2022 — four years from the date of her arrest — provided that she complied with all her obligations under the terms of the deal.

"Should the offices pursue the prosecution that is deferred by this agreement, Meng stipulates to the admissibility of the statement of facts ... in any proceeding against her," he said.

Prime Minister Justin Trudeau says Canadian citizens Michael Kovrig and Michael Spavor are on their way back to Canada after being detained in China for nearly three years. #cdnpoli

"Meng further agrees that she and her lawyers, and representatives authorized to speak on her behalf, will not make any statements after entry into this agreement that may contradict any of the facts in the statement of facts."

The U.S. statement of facts spells out the thrust of the allegations against Meng — essentially, that she portrayed Skycom, which operated primarily in Iran, as a separate and distinct business partner when it was for all intents and purposes a wholly owned subsidiary.

"As Meng knew, Skycom was not a business partner of, or a third party working with, Huawei," the document says. "Instead, Huawei controlled Skycom, and Skycom employees were really Huawei employees."

A statement from Canada's Department of Justice after the U.S. hearing said there was no longer a basis for the extradition proceedings against her.

"Meng Wanzhou is free to leave Canada," the statement said. "Meng Wanzhou was afforded a fair process before the courts in accordance with Canadian law. This speaks to the independence of Canada's judicial system."

Meng appeared in person in the B.C. Supreme Court on Friday afternoon where Associate Chief Justice Heather Holmes signed the order discharging her, vacating her bail conditions and officially closing the Canadian case against her.

"You have been co-operative and courteous throughout the proceedings and the court appreciates and thanks you for that," Holmes told Meng.

"Thank you, my lady," Meng answered.

In a statement outside the court, Meng thanked the judge, the Crown lawyers and the Canadian people for their tolerance.

"Sorry for the inconvenience," she said.

Meng also noted how her life has been turned "upside down" by the case. She said she appreciated the court for its professionalism and the Canadian government for upholding the rule of law.

"It was a disruptive time for me as a mother, a wife and a company executive," Meng said. "But I believe every cloud has a silver lining. It really was an invaluable experience in my life. The greater the difficulty, the greater the growth."

The Huawei executive's arrest three years ago saw relations between Canada and China deteriorate and a cascade of effects including the arrest of the two Canadian men.

Kovrig is a Canadian diplomat on leave to the International Crisis Group, a peace-building non-governmental organization. Spavor is an entrepreneur who tried to forge people and business ties to North Korea. They were detained on Dec. 10, 2018.

Earlier this year, Kovrig and Spavor were both convicted of spying in closed Chinese courts — a process that Canada and dozens of allies said amounts to arbitrary detention on bogus charges in a closed system of justice with no accountability.

Spavor received an 11-year sentence, while Kovrig had yet to be sentenced.

This report by The Canadian Press was first published Sept. 24, 2021.