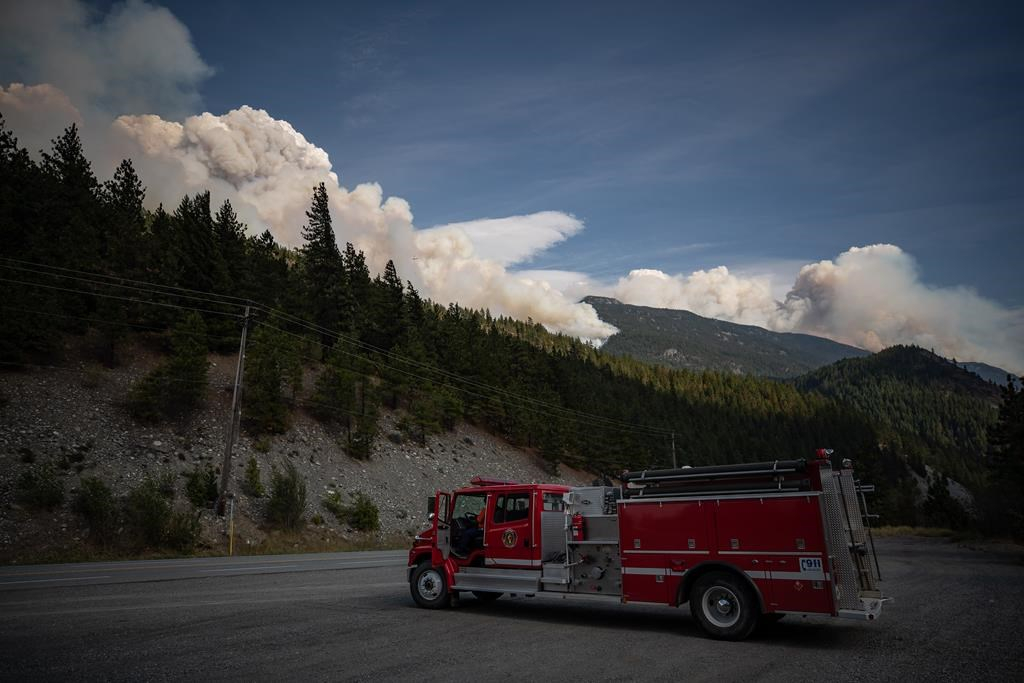 A man sits in a fire truck as the Lytton Creek wildfire burns in the mountains near Lytton, B.C., on Sunday, August 15, 2021. File photo by The Canadian Press/Darryl Dyck
Previous story
Next story

The plight of the residents of the British Columbia village of Lytton that was all but destroyed in a wildfire this summer gained political focus Thursday in the provincial legislature.

Jackie Tegart, the Liberal member for Fraser-Nicola, said the lives and livelihoods of communities, citizens and businesses devastated by summer wildfires are being kept needlessly on hold.

Premier John Horgan's pledge to rebuild the community following last June's wildfire has failed to materialize at this point, she said.

"He promised the people of Lytton they would be whole again," said Tegart, whose riding includes the village.

Instead, many residents have spent the last 99 days in hotels, Tegart said.

Record Canadian temperatures at the end of June surpassed 49 C in Lytton. The fire destroyed much of the community within hours. Two people were killed.

The cause of the fire is still under investigation. The Transportation Safety Board joined the probe into the cause after RCMP and the B.C. Wildfire Service said there was a possibility that a train may have sparked the blaze.

Horgan said this summer after flying over the fire damage in Lytton that the village's reconstruction could be a case study for North America in dealing with climate change.

He said the province was ready to help build the "town of tomorrow."

The premier said during question period Thursday that the private sector, Fraser River Basin Management Council, municipal leaders and a special cabinet working group are all working on Lytton to help with the recovery.

“We are doing our level best to bring together the right people,” said Horgan.

Tegart replied, “If you are doing your level best, my God, we’re in trouble.”

The Liberals also criticized the government's plans to assist residents in the Monte Lake, Kelowna and Vernon areas who lost homes in wildfires this summer, as well as ranchers who are waiting for the government to replace destroyed cattle fences on Crown land.

Horgan also faced questions for the third consecutive day in the legislature about his original comments warning about the province's late June heat wave.

Interim Liberal Leader Shirley Bond said Horgan sounded more pleased about the government's lifting of COVID-19 restrictions and less concerned about the dangers of the coming heat wave, which contributed to 569 heat-related deaths.

"It was to those very populations who were at risk, that the premier callously dismissed when he said, and I quote, 'Fatalities are a part of life and there's a level of personal responsibility.'"

Bond demanded Horgan accept the recommendations in a report released Tuesday by Human Rights Watch, an independent international watchdog organization, that called on the B.C. government to appoint an independent review of the heat wave and its impact on the province.

The B.C. government had previously commissioned a review in 2019 that warned of the dangers of a heat wave, she said.

"They were not prepared, and as a result, hundreds of families lost cherished loved ones," Bond said, referring to the provincial government. "Five hundred and seventy British Columbians died and they deserve accountability from this premier."

Horgan told the legislature that at the time he made his comments, the magnitude of the threat to the province was just emerging.