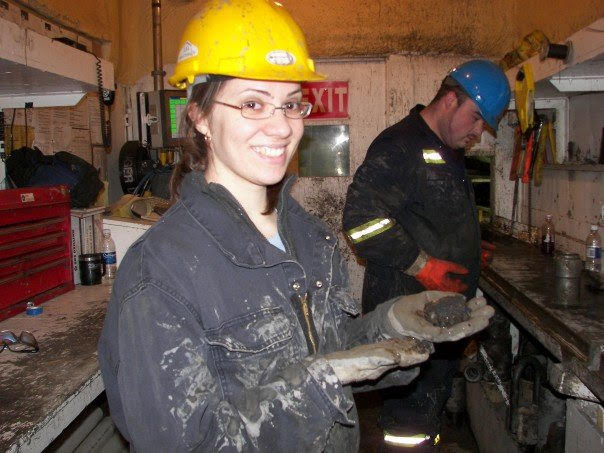 As part of a series highlighting the work of young people in addressing the climate crisis, writer Patricia Lane interviews Luisa Da Silva of Iron & Earth, a group dedicated to a just transition for fossil fuel workers as we shift to clean energy.

Want to know what a job looks like for a fossil fuel worker in the net-zero economy? Just ask Luisa Da Silva. As executive director of Iron & Earth, she makes the rubber hit the road.

Iron & Earth creates pathways for Indigenous people and fossil fuel industry workers to transition into the next economy, which must be net-zero if humanity is to thrive. We describe the kinds of jobs workers can move into based on their skills and interests, and help match them with potential employers. We work with Indigenous communities to help diversify their energy sources away from diesel towards solar and wind. We show communities that fossil fuel workers should be seen as skilled resources to reduce carbon emissions.

How did Iron & Earth get started?

In 2016, the oil industry went through one of its quite characteristic slumps, and 100,000 Canadian workers lost their jobs. A small group of young oil workers saw the writing on the wall. They understood their labour was contributing to climate change and wanted jobs they could be proud of, jobs that would form part of the solution rather than part of the problem. They were seeking stability and jobs that would pay enough to support families. They founded Iron & Earth and began raising money to run training and advocacy programs. I took over as executive director in May. My team is national, and we are growing by leaps and bounds.

What are some examples of how your work benefits workers and communities?

Want to know what a job looks like for a #FossilFuel worker in the #NetZero economy? Just ask Luisa Da Silva. As executive director of Iron & Earth, she makes the rubber hit the road.

Iron & Earth members in St John’s, N.L., became frustrated with the high price and seasonal availability of fresh vegetables. We helped them team up with Autism Newfoundland to build a solar greenhouse, which now grows fresh herbs and tomatoes, cucumbers, and other fresh produce year-round. The proceeds support those with autism. This is a model for communities across the country, especially in the North where fresh food is expensive and often scarce.

With our partner RenuWell, we set up solar farms on land abandoned due to the presence of orphaned oil and gas wells by acting quickly to use existing roads and electrical infrastructure.

We have supported many employed in fossil fuels to transition successfully. Often workers don’t immediately see their skills are portable to the new economy. We offer micro skills-training programs that require only a few days of training to transition. One example is an engineer who moved out of the oilsands and is using her skill set in wind energy. Opportunities will abound in geothermal and hydrogen in the future. Our country’s challenge is going to be finding workers who see their skills fit well to make a contribution.

We are poised to take advantage of the growing government commitment to renewable energy. We have shown we have the people and the skills — now we need the policy to follow. We are ready to scale up so that thousands can make similar decisions without losing significant income.

I began my working life as a geoscientist in the oil and gas industry. Since then, I have gained experience in adult education, development, leading teams, and upscaling. True happiness for me is when I am immersed in nature. I wanted a challenge that would allow me to feel I was contributing to the health of the natural world in a major way. I was delighted when this opportunity opened up for me.

How did the way you were raised impact you?

Weekends were spent with my parents in Burlington’s Royal Botanical Gardens and other outdoor activities. Lake Ontario was an extension of our backyard. Happiness, family, and play were inextricably linked to being in nature.

I sleep well! I know I am not sitting around letting others come up with ideas or solve problems. I spend my days trying to make a difference. Sometimes it is uncomfortable, but it is so worth it.

No matter how hard we push, in the end, decisions are the responsibility of the politicians and industry. I worry that they do not see the opportunities and the urgency.

What advice might you have for other young people?

Don’t let fear hold you back. Others might have ideas about your future, but it is yours, not theirs. If there is something you truly believe in, you might hear a lot of “Nos” along the way. But you only need one “Yes.” You are stronger, more resilient and more intelligent than you think.

Once you reach the top of the building, send the elevator back down. Think of all the times you wished you had someone supporting you. Be that person for someone else.

Excellent!!! That last piece of advice to seniors is life-changing!! As a senior myself, I've often thought of whatever it might be that I plan to take with me to the next "chapter" of my being, and anything I've learned and experienced is definitely NOT part of that!!