House of Commons precinct limits entry to only those fully vaxxed 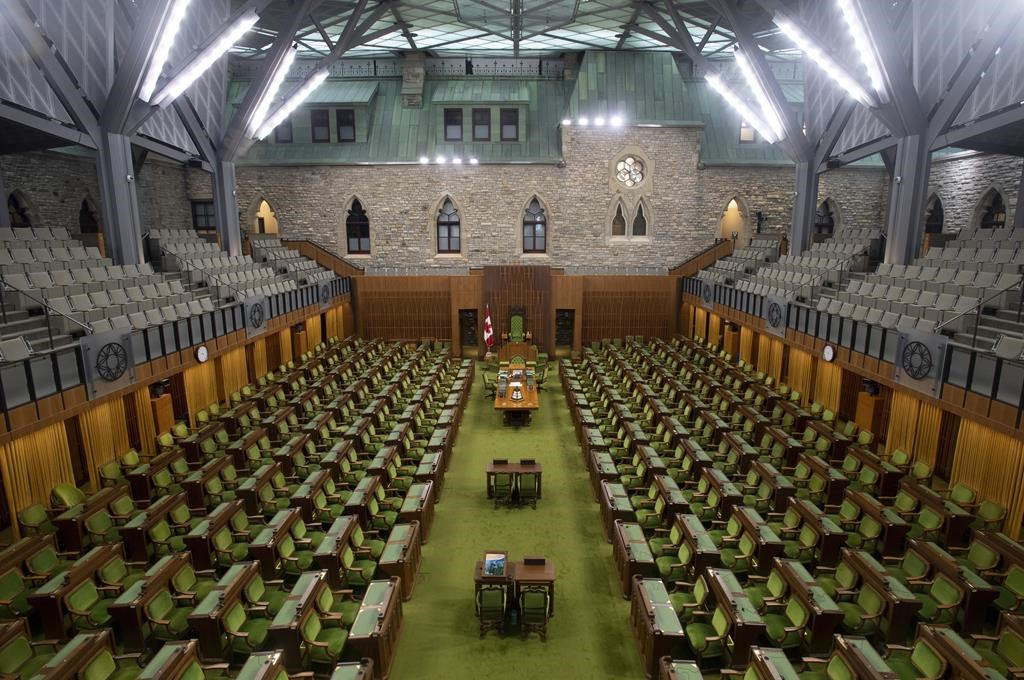 The House of Commons chamber is seen empty, on Wednesday, April 8, 2020 in Ottawa. File photo by The Canadian Press/Adrian Wyld
Previous story
Next story

When Parliament resumes on Nov. 22, no one will be allowed into the House of Commons precinct unless they are fully vaccinated against COVID-19.

That could present a problem for Conservative Leader Erin O'Toole, who has refused to say how many of his 118 MPs are fully vaccinated.

O'Toole has personally supported vaccinations but has opposed making them mandatory, arguing that individuals' personal health decisions should be respected.

All other parties support mandatory vaccination and say all of their MPs have had two shots of a Health Canada-approved vaccine.

Speaker Anthony Rota announced late Tuesday that the all-party board of internal economy has decided that only fully vaccinated individuals will be allowed to enter the House of Commons precinct.

The precinct includes all the buildings on Parliament Hill that house the Commons chamber, as well as MPs' offices and Commons committee rooms.

The precinct will remain closed to members of the public and anyone allowed in will have to wear a mask, except when they are at a work station that allows for two-metres of physical distance.

The Senate will make its own decision on whether proof of vaccination will be required for admittance to the upper house, its offices and committee rooms.

In the Commons precinct, exceptions will be made for individuals who have a medical exemption from vaccination. They will have the option of providing proof of a recent negative COVID-19 rapid antigen test result.

Only fully vaccinated people to be allowed in House of Commons precinct. #CDNPoli #COVID19

Children under 12, who are not yet eligible for vaccinations, will also be exempt.

The Conservatives have two representatives on the board of internal economy. It was not immediately clear whether they agreed with the decision to admit only fully vaccinated individuals into the Commons precinct.

Earlier Tuesday, Prime Minister Justin Trudeau and Bloc Quebecois Leader Yves-Francois Blanchet agreed during a phone conversation that only fully vaccinated individuals should be allowed in the Commons.

"My impression is that the board of internal economy has such authority, and my intuition is: We're going ahead, we're doing it," Blanchet said in a telephone interview before the board's decision was announced.

"If there are those who want to challenge it, well they'll challenge."

Blanchet had little apparent sympathy for the dilemma the decision presents for O'Toole.

At last count, 79 of 119 Conservative MPs have confirmed to The Canadian Press that they are fully vaccinated. Of the other 40, two have refused to disclose their status on principle and 38 others have not responded.

Trudeau is scheduled to speak to O'Toole and NDP Leader Jagmeet Singh separately on Wednesday. He will also speak to the parliamentary leader of the Greens, Elizabeth May.

Among other things, the conversations are aimed at figuring out whether the House of Commons should return Nov. 22 in the same hybrid format used for the past year during the pandemic — with few MPs in the chamber and most participating virtually from their homes or offices — or resume normal in-person sittings.

A spokesman for government House leader Pablo Rodridguez said Tuesday that the minority Liberal government would prefer to continue with hybrid sittings.

"We believe the hybrid House of Commons worked well earlier this year. We are supportive of continuing to have hybrid sittings of the House and continuing to make use of technology to ensure that Parliament continues to work well for all Canadians," said Simon Ross.

"Hybrid sittings allow for flexibility for MPs to adapt to changing circumstances of COVID-19 across the country."

The New Democrats also favour resuming hybrid sittings but the Bloc and the Conservatives have called for an in-person return. However, O'Toole may yet be forced to agree to a hybrid format as the only way to ensure unvaccinated MPs are able to participate.

Among the other items discussed with Trudeau on Tuesday, Blanchet said he suggested that the prime minister expand a promised federal-provincial meeting on health transfers to make it a summit on the financing of health care.

Blanchet is calling for a summit before the end of the year that would bring together all of the premiers and provincial health ministers as well as opposition parties.

Trudeau's reaction to the idea? "He took note of it," Blanchet said, but the Prime Minister's Office made no mention of it in a readout of the two leaders' conversation.

The PMO readout said the two discussed the importance of tackling climate change and Blanchet said he believes they can find common ground on the topic.

“I don't know Mr. Trudeau's long-term plans, but he might want to have a meaningful mandate on the environment and climate change," Blanchet said. "If this is really his will, we will be able to talk to each other."