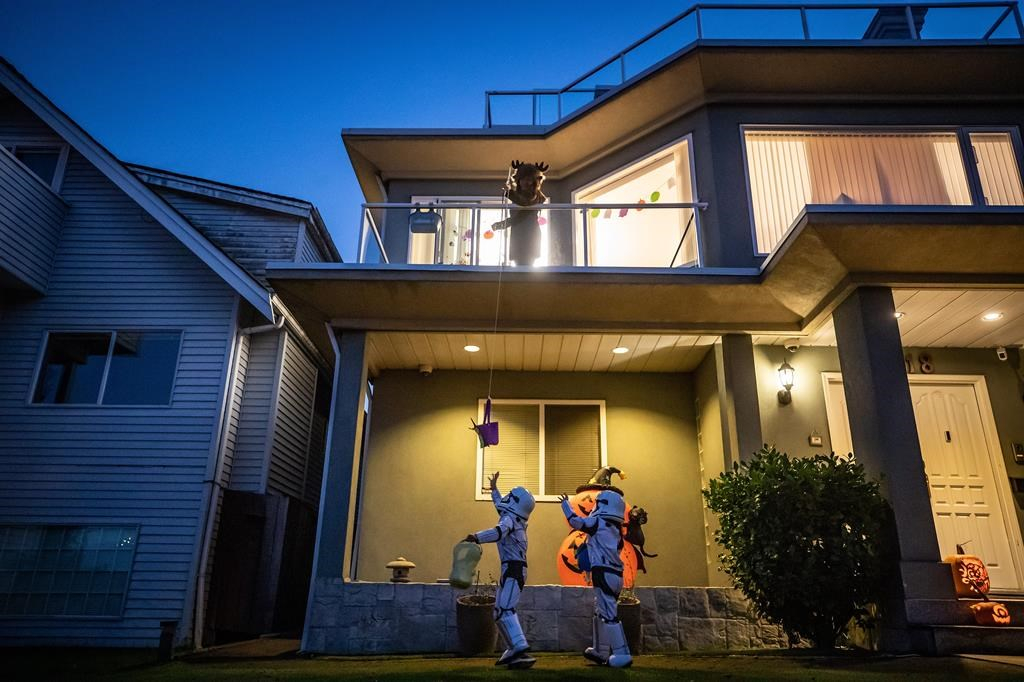 Delia Chang uses bamboo and a string to lower candy down to trick-or-treaters at her home on Halloween amid the COVID-19 pandemic, in Vancouver, B.C., on Saturday, Oct. 31, 2020. File photo by The Canadian Press/Darryl Dyck
Previous story
Next story

Many parents are planning to let their children go trick-or-treating this year — but a new poll suggests they may find fewer doors open than in pre-pandemic Halloweens.

Some 93 per cent of respondents whose kids trick-or-treated last year intend to have them go candy hunting again this Sunday, according to a new survey by Leger and the Association for Canadian Studies.

But the online poll suggests fewer than half of Canadians will open their doors to trick-or-treaters due to COVID-19.

Of the 56 per cent who checked no, half said they would typically dole out candy on Halloween but will not this time "given the current pandemic."

Leger executive vice-president Christian Bourque says some parents who kept their kids at home last year may allow them to hit the pavement on Oct. 31, given the high vaccination rates now versus the absence of vaccines a year ago.

"If you're opening your door do you fear that you're going to let the virus in? I don't know," Bourque said. "Usually you stay on the porch.

"We've already bought the candy to open the door."

Many Canadians also trick or treat in condo and apartment buildings, where open-air interactions are not an option.

Of the 447 respondents who had children of trick-or-treat age, 252 let them costume up and go porch to porch last year, with the vast majority of those planning the same for Sunday. The sample size is small and may not be fully reflective of Canadians' Halloween plans.

Poll: Canadians still reluctant to hand out #Halloween candy due to pandemic. #Covid19

Conducted Oct. 22 to 24, the online poll surveyed 1,512 Canadians and cannot be assigned a margin of error because internet-based polls are not considered random samples.

The survey also asked Canadians to weigh in on economic questions.

About four in five respondents said the minimum wage should rise. It ranges from $11.75 in New Brunswick to $16 in Nunavut, hovering between $12.75 and $15.20 in most provinces.

More than a third of respondents said the higher cost of goods is the economic factor that affects them the most, followed by the cost of gas — $1.38 on average in Toronto last month and a spooky $1.57 in Vancouver — at 22 per cent.

September's inflation rate came in at 4.4 per cent — the fastest annual pace since February 2003 — according to Statistics Canada, though Bank of Canada governor Tiff Macklem said last week that recent inflation readings are "transitory" and rate adjustments would only be spurred by more long-term pressures.