By Josh Boak, Ellen Knickmeyer & Zeke Miller | News, US News, Politics | November 2nd 2021
#1812 of 2033 articles from the Special Report: Reports from the Race to a Safer World 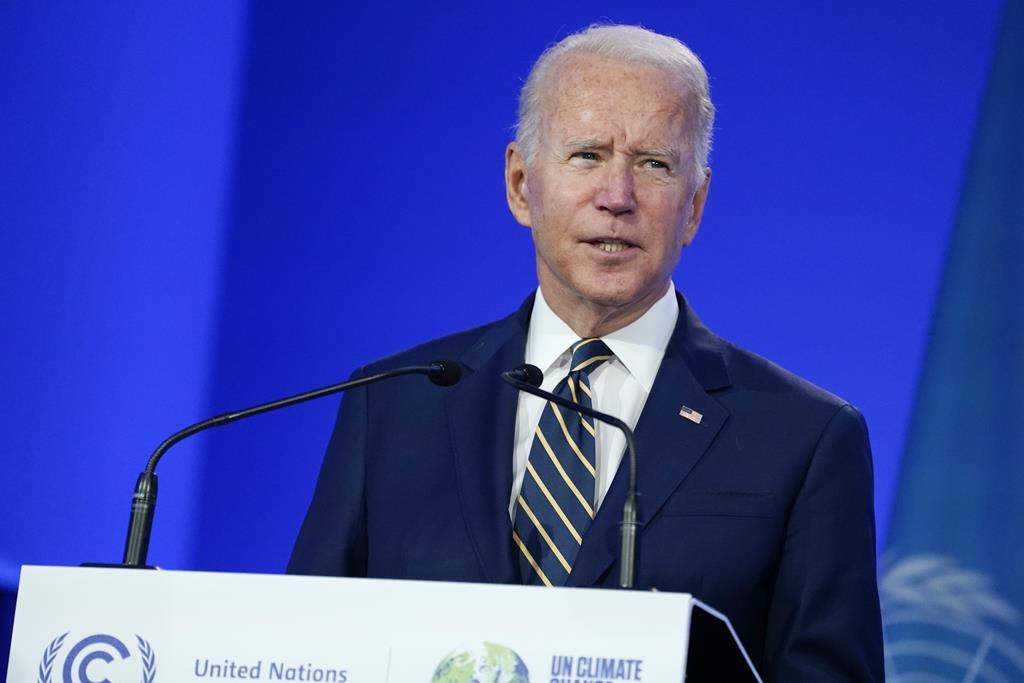 President Joe Biden is joining other world leaders in highlighting the importance of preserving forests as a force against global warming, whipping up ambitions at a U.N. climate summit abroad even as a coal-state U.S. senator is again threatening Biden's landmark climate legislation at home.

Comments by Democratic Sen. Joe Manchin that he still has doubts about Biden's $1.75 trillion domestic policy proposal, which includes $555 billion in provisions to combat climate change, come at an unfortunate time for the president.

They landed as Biden and his aides are exhorting, coaxing and deal-making with government heads for faster action on cutting climate-wrecking fossil fuel emissions at a summit with more than 100 other world leaders in Glasgow, Scotland, in its second day Tuesday.

Manchin holds a key vote in the Senate, where Biden has the slimmest of Democratic majorities, and he has successively killed off key parts of the administration's climate proposals. He said Monday he was uncertain about the legislation's impact on the economy and federal debt and was as “open to voting against” it as for it.

Biden has been determined to demonstrate to the world that the U.S. is back in the global effort against climate change, after his predecessor Donald Trump pulled the U.S. — the world's largest economy and second-biggest climate polluter — out of the landmark 2015 Paris climate accord.

Putting the U.S. on the path to halve its own output of coal, oil and natural gas pollution by 2050, as his climate legislation seeks to do, “demonstrates to the world the United States is not only back at the table, it hopefully can lead by the power of our example,” Biden told delegates and observers in Glasgow on Monday.

“I know that hasn't always been the case," he added, in a reference to Trump's tenure in office.

Biden has essentially bet that the right mix of policies on climate change and the economy are not only good for the country but will help Democrats politically. But there are open questions about whether he has enough political capital at home to honor his promises to world leaders about shifting the U.S. toward renewable energy.

Gubernatorial elections on Tuesday in Virginia and New Jersey — states that Biden won in last year’s election — will provide the first ballot-box test of how Americans view his presidency.

Biden is due to join other leaders Tuesday for an initiative to promote safeguarding the world's forests, which pull vast amounts of carbon pollution from the air. After discussions at the U.N. summit on reforestation and methane, Biden will hold a final news conference before returning to Washington on Air Force One.

Back home, his administration chose Tuesday to launch a wide-ranging plan to reduce methane emissions, targeting a potent greenhouse gas that contributes significantly to global warming.

Biden was upbeat Monday, smiling and back-patting with allied leaders in Scotland — though briefly resting his eyes while in the audience for climate speeches. He came to the summit saying he hoped to see his legislation pass this week.

But the latest objections from Manchin threaten to close the narrow window Biden may have to pass his spending bill. The senator is eager to preserve his state's declining coal industry despite coal's falling competitiveness in U.S. energy markets.

If Biden's climate legislation falters, he could be limited to regulatory projects on climate that could easily be overturned by the next U.S. president, and turn his stirring cries for climate action abroad into wistful talk at home.

Manchin’s statements are a possible sign that one of two key Democratic votes in the Senate wants to delay any votes on the president’s agenda until the bill is fully vetted. But House Democrats are still taking steps this week to pass Biden’s $1 trillion infrastructure package, which includes efforts to address climate change. The White House is seeking to turn both measures into law, linking them in hopes of appeasing a diverse and at times fractious Democratic caucus.

“It is fully paid for, will reduce the deficit, and brings down costs for health care, childcare, elder care, and housing,” Psaki said. “We remain confident that the plan will gain Senator Manchin’s support.”

Biden hinted at the challenge of trying to lead globally on climate at a time of political divisions at home. In seemingly impromptu comments on the Glasgow summit sidelines Monday, Biden referred to the collapse of U.S. climate efforts under Trump.

"I shouldn’t apologize, but I do apologize for the fact the United States, the last administration, pulled out of the Paris accords and put us sort of behind the eight ball a little bit," he said.

By Associated Press | News, US News, Politics | November 1st 2021
Reports from the Race to a Safer World

Why rich nations must pay for climate damage

By Aamer Madhani & Darlene Superville | News, US News, Politics | September 8th 2021
Reports from the Race to a Safer World