By Rochelle Baker | News | November 3rd 2021
#51 of 99 articles from the Special Report: COP26: Uniting the World to Tackle Climate Change 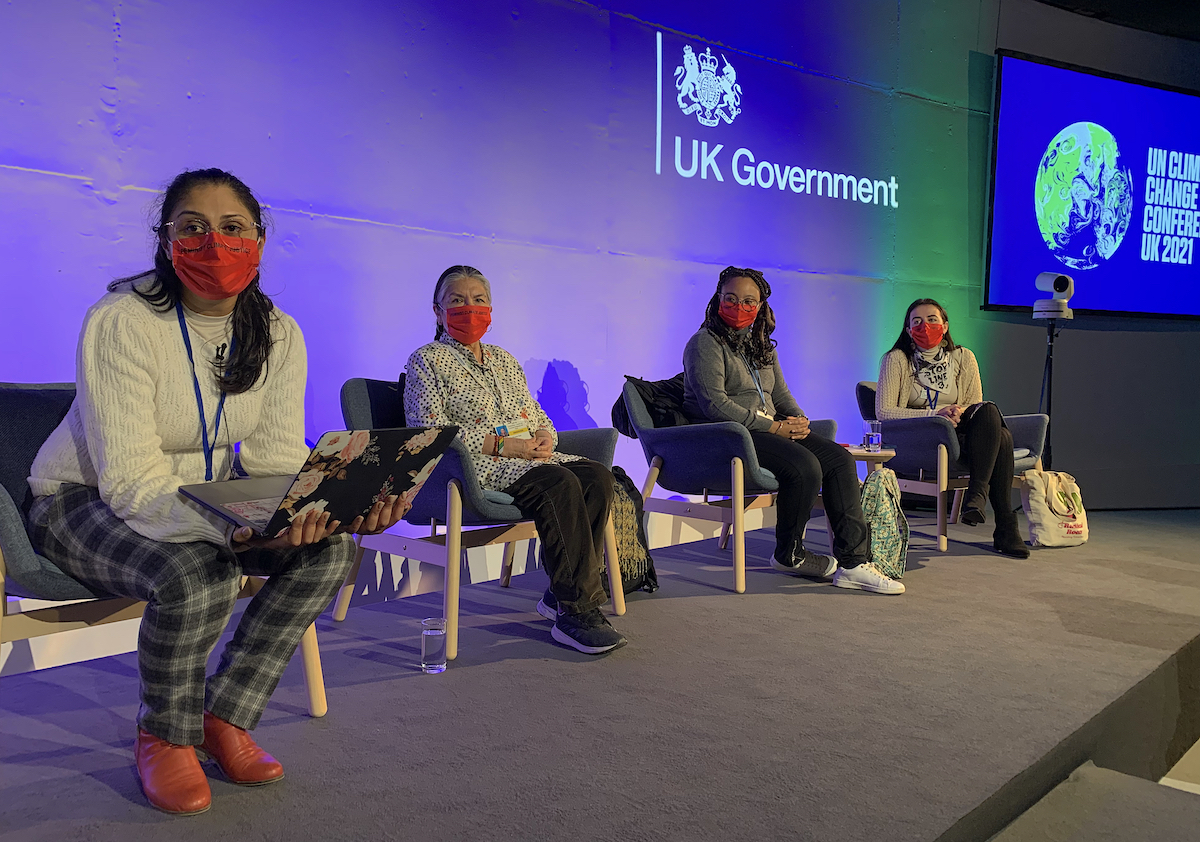 Wearing red masks in solidarity with their Indigenous sisters, climate activists from the Global South shared stories about their successes, struggles and what real climate justice looks like at COP26. Photo by Rochelle Baker
Previous story
Next story

Feminist activists and leaders from around the globe ascended the stage at COP26 to say there is no climate justice without addressing gender equity and human rights for women.

Wearing red masks in solidarity with their Indigenous sisters, climate activists spanning the Global South talked to a packed venue about the successes, struggles and what real climate justice must look like during a public event hosted Monday evening by the Women and Gender Constituency, a stakeholder group with the United Nations Framework Convention on Climate Change (UNFCCC).

Moderator and international human rights lawyer Kavita Naidu launched the panel by acknowledging that many climate activists were absent at the UN climate conference taking place in Glasgow, Scotland.

Many have lost their lives fighting for climate justice, or face the risk of persecution or kidnapping at home, she said.

And innumerable other members from the movement couldn't attend due to stumbling blocks created by immigration rules, visas and other challenges posed by the pandemic.

Despite the vital importance of a climate conference tasked with confronting a “code red for humanity," COP26 is being roundly criticized for the lack of participation by groups from the Global South, which largely bear the brunt of climate change impacts.

“Fundamentally the climate crisis is about justice,” Naidu said, noting COP26’s blue zone for officials is packed with delegates, corporate partners and trade shows with little acknowledgement of that issue.

“This is where we come in as feminist activists,” she said.

“We need to remind people everywhere that fundamentally the Global North is responsible for climate injustice in this world today, while we in the Global South are facing disproportionate impacts for something that we haven't started, and yet, here we are.”

“The sad part is that the women are the most vulnerable and most affected by all these different impacts,” Marie Christina Kolo of Ecofeminism Madagascar tells COP26. #climatejustice #womensrights #COP26

Xiomara Acevedo, climate activist and founder of the youth environmental group Barranquilla +20, said her home country of Colombia is one of the richest in the world in terms of biodiversity, yet activists and human rights defenders protecting it must risk their lives.

The Colombian government is promoting false solutions that focus on the economic benefits associated with protecting biodiversity, she said.

“But we see that [our role] is to protect and conserve this for other generations,” she said. “This is the catalog of our national and cultural heritage.”

Any struggle by an individual around securing human rights or fighting for the climate is a struggle for collective rights, Zea said. Women not only give and protect human life but also protect Mother Nature, she said.

Women are central to concerns around health, nutrition, food sovereignty, biodiversity protections and an understanding of their lands.

“Our knowledge is not the problem. We are not the problem,” she said, adding the exploitation of resources by industry and government must be curbed to achieve climate justice.

The Women and Gender Constituency has pledged to raise several demands focused around gender, climate justice and human rights at the UN summit where the science is clear that current emissions targets fall well short of what's need to meet the Paris Agreement to keep global warming at 1.5 C. And where promises from the Global North of $100 billion US per year in climate finance to less wealthy nations to fund their climate transitions have not been realized.

Marie Christina Kolo, with Ecofeminism Madagascar, said though her nation is a champion of biodiversity it is being ravaged by a number of impacts from climate change including cyclones, flooding, bleaching of coral reefs, and most recently, outbreaks of famine in island nation's southern regions.

The humanitarian disaster is a stark indicator of how climate change and the rights of women and children cannot be teased apart, Kolo said.

“The sad part is that the women are the most vulnerable and most affected by all these different impacts,” she said.

Yet women — some suffering under heavy burdens including being unable to cultivate the land or fish the seas as they once could — are often a source of strength and motivation, Kolo noted.

She shared the story of a young woman and mother of 13 named Veronique, who had already lost two of her children to starvation. But she became the leader of a cooperative trying to find climate solutions or adaptions in her community, exploring ways to regenerate fish stocks and implement climate-smart agriculture, Kolo said.

“She’s a very strong woman, and today, I can say that she's one of my inspirations.”

Stories featuring the resilience and successes of women in the Global South tackling climate change are crucial, Naidu said.

“It’s so important that we centre their voices in the work that we do because these are the groups that have the agency to come up with the solutions needed to fight against systems of injustice,” she said.

“Because it’s not corporations, and it’s definitely not our governments, that are coming up with the solutions that we need to hear.”

Who has a seat at the COP table?