By Morgan Sharp | News, Next Gen Insider | November 3rd 2021
#49 of 99 articles from the Special Report: COP26: Uniting the World to Tackle Climate Change 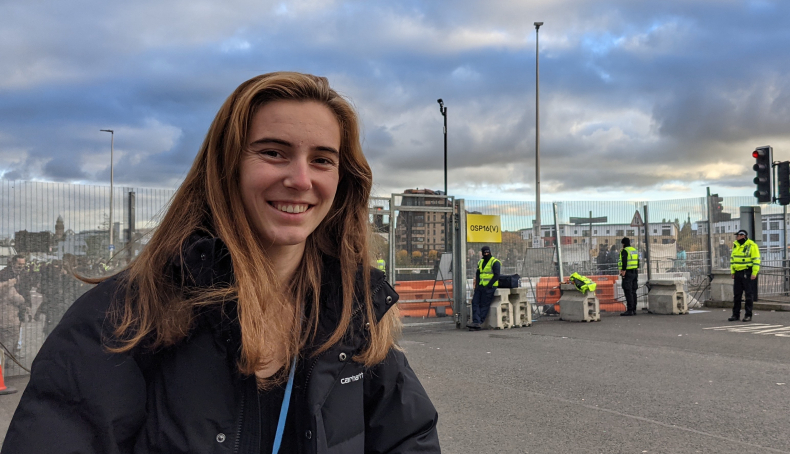 Young people deserve a more nuanced telling of the unfolding climate crisis from the media and shouldn’t have to skip school to get themselves heard, climate activists said at COP26 in Glasgow, Scotland, on Tuesday.

Speaking at a panel discussion on how to better educate and engage students, Howey Ou of China said that means not falling back on a tired ‘David versus Goliath’ framing of her climate activism pitted against the Chinese government.

“The narrative that criticizes China for the failure of climate distracts people from looking at the climate and ecological crisis through an anthropogenic lens,” said 20-year-old Ou, dubbed the ‘Greta Thunberg of China’ in some English-language media.

Authorities have kept her from school because of her protests.

“The developed countries shifted the basic manufacturing industries to the Global South to use their land, water and air to avoid the pollution, while the local nature and human lives there are being exploited,” she added. “How ignorant these people are when they criticize the survivors, how ignorant they are to be unaware that humans have gradually become the slaves of machines.”

Adélaïde Charlier from Belgium agreed that Europeans should not be too smug about reduced emissions recently given that their demand for goods creates a sizable chunk of the market for China’s manufacturing sector and other industries.

“China is of course a part of climate change,” she said. “But not only because of the Chinese but because of the fact that the entire world and mainly the Western world is actually producing there and consuming in Europe.”

The shift of global production to lower-cost countries adds to the responsibilities faced by countries in Europe and others that industrialized earlier, Charlier said.

“If we are developed today it's for a certain reason and it's because we have emitted so much CO2 in the atmosphere,” she said of Belgium specifically. “And therefore we need to be able to react to that and be a leader not only because we want to look beautiful but because that’s our responsibility.”

“The developed countries shifted the basic manufacturing industries to the Global South to use their land, water and air to avoid the pollution," Chinese climate activist Howey Ou tells COP26. #youth #climatechange #China

Charlier was in a group of 10 young activists from Belgium who got to say as much to their country’s Prime Minister Alexander De Croo earlier on Tuesday. She said she appreciated the audience, but is still skeptical.

“He listened, for sure he didn’t promise anything, like usually,” Charlier said, adding that it was frustrating that youth voices only seem to be heard when they are yelling slogans in the streets.

“We are listened to because we decided to not listen to our parents and teachers and go out on the streets, and that’s really a paradox,” she said, noting that can result in loss of education and other risks for youth who take part.

It also featured the work of Prof. Alison Anderson from the University of Plymouth who hosted a series of workshops with older teenagers in southwest England using an interactive game with visual icons to engage them in discussion on the issues, including how mainstream media are covering them.

“We found that young people were much more familiar with the effects, the impacts of climate change than they were of the causes,” Anderson said, and they often find jargon and technical terms problematic.

Most of the youth involved in the project get their news and information from video and image-based online platforms such as Tiktok, YouTube, Facebook and Instagram, she said, where the ultimate source of content can be hard to ascertain.

By not emphasizing the roots of climate change, it's not obvious to students that human consumption is a primary cause, the young activists said.

Anderson said that might explain a general avoidance of looking too closely at the topic.

“This is much more difficult to talk about because [it requires] a systemic-level change and people tend to brush that under the carpet,” she said.