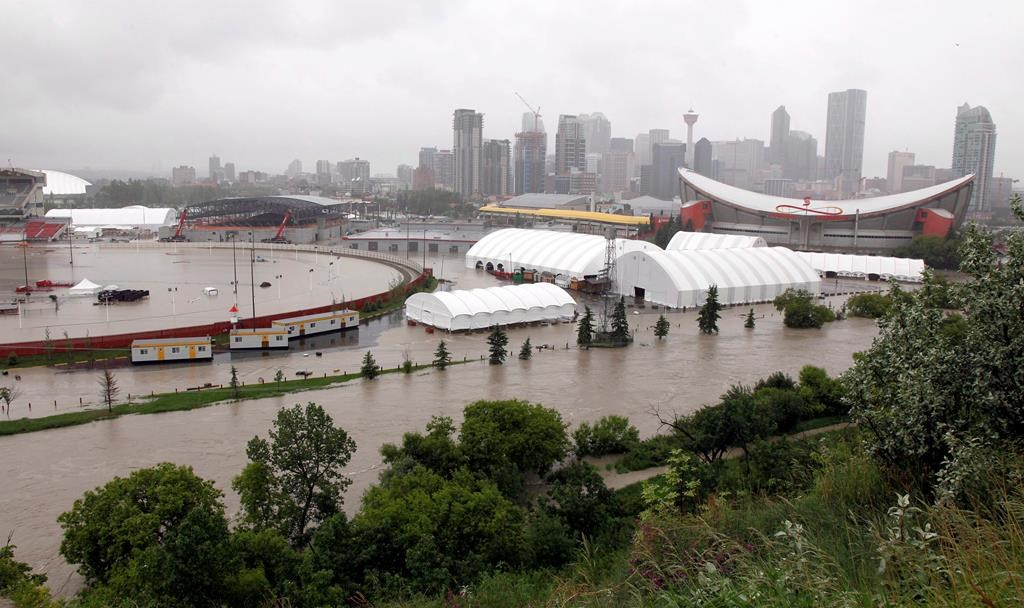 The Calgary Stampede grounds and Saddledome are flooded due to the heavy rains in Calgary on June 21, 2013. File photo by The Canadian Press/Jeff McIntosh
Previous story
Next story

Low-lying areas of major cities like Vancouver and Montreal could become inundated with floods in the next 80 years under various climate change scenarios, suggests a floodplains map developed by a Western University researcher.

The maps, created by engineering professor Slobodan Simonovic, are a visual distillation of almost 150,000 reference documents – including current and historical rainfall and snow-melt runoff data, topographic analyses, urbanization factors that impede effective drainage and a range of climate projections.

Simonovic superimposed the data on web-based maps to show potential future flood inundation — how much of an area is covered by water — as well as how often and how significant floods could be.

The maps, which show flood impacts on a Canada-wide scale in a standardized way, identify areas where rivers are most likely to overflow, including the Assiniboine and Red rivers that converge on Winnipeg and the Fraser Valley that runs through Vancouver.

Simonovic said other vulnerable streams are found in parts of northern Ontario, Quebec and British Columbia, the Mackenzie River in Northwest Territories, and much of the island of Montreal.

One of his goals was to show the public the impact of floods resulting from climate change.

"Obviously, this is not every location within the country. There are some areas higher risk that others, but an overall increase up to that level is a very significant message."

Users of the map can search by postal code and zero in on neighbourhoods, or compare current 100-year flood zones to those forecast under worst-, mid- or best-case climate-change scenarios 60 years and 80 years from now.

He said the next steps for his project are to expand the mapping to include coastal flooding and fine-tune projections to even smaller grids with greater neighbourhood detail.

His mapping work was funded through a collaborative grant from the Natural Sciences and Engineering Research Council of Canada (NSERC) and Chaucer Syndicate, a group representing insurers of insurance companies across Canada.

"Definitely the message is we have to rethink, prepare better and re-evaluate the risk at important locations," Simonovic said, adding that approximately four million Canadians now live in flood-affected areas.

"Our work is one step towards better understanding that these consequences of climate change are significant in Canada."

This report by The Canadian Press was first published Nov. 3, 2021.

As a Vancouverite, I've

As a Vancouverite, I've always assumed that Richmond, for instance, will be toast once the sea level rises even a fairly modest amount. Unless we do the Holland thing, anyway.
I'm a bit surprised about Montreal, though--I'd figured it was far enough up the river for sea level rise not to be an issue. Maybe it's more about rain/storm patterns there.