By David Tindall | Opinion | November 5th 2021
#66 of 99 articles from the Special Report: COP26: Uniting the World to Tackle Climate Change 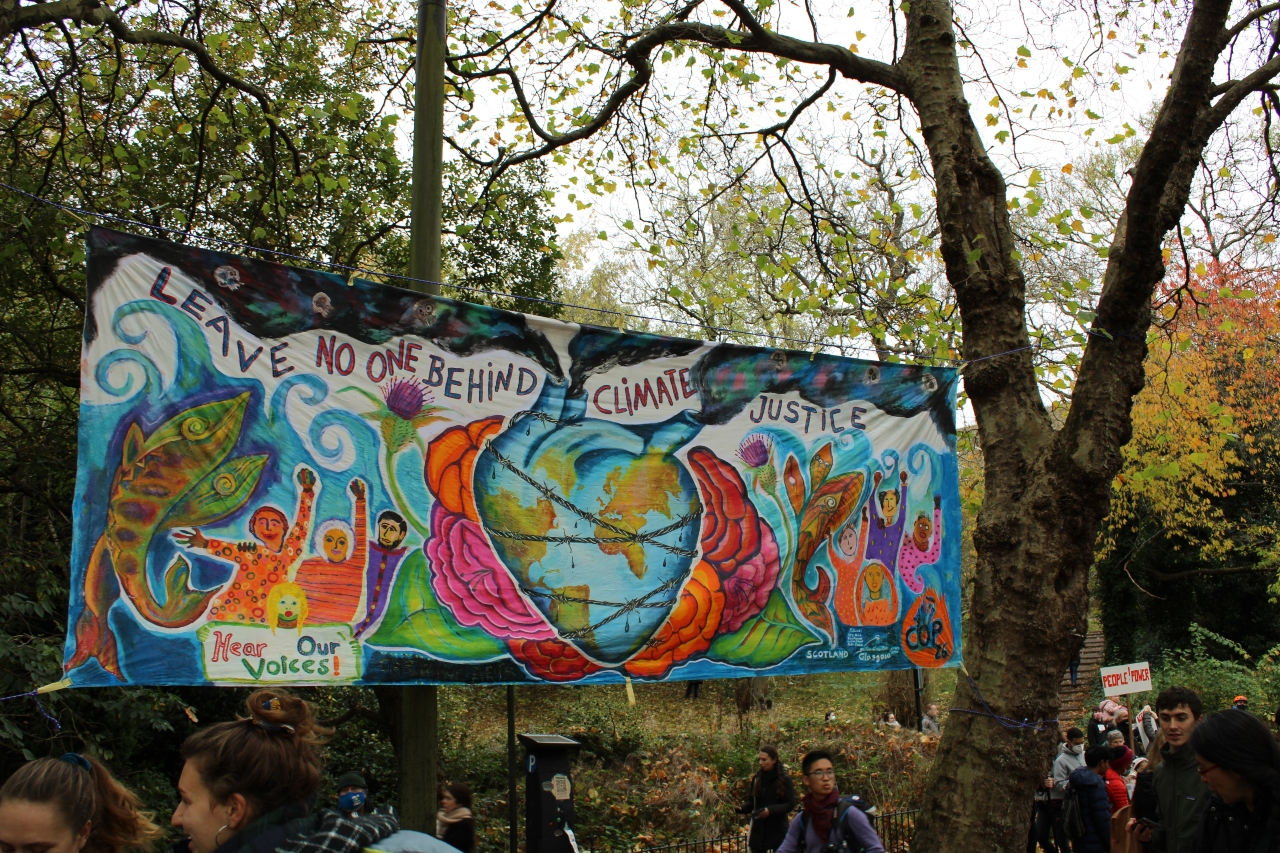 A climate justice banner at the Fridays for Future march at COP 26 in Glasgow on Friday. Photo by David Tindall
Previous story
Next story

Climate justice refers to the notion that there are differences between those who have profited from the benefits of carbon emissions and those harmed by climate change. It also notes those who have suffered the most from the manifestations of climate change have created disproportionately less of the emissions.

Some of the groups considered in this framework are illustrated in one clause of the preamble of the Bali Principles of Climate Justice, which states: The impacts of climate change are "disproportionately felt by small island states, women, youth, coastal peoples, local communities, Indigenous peoples, fisherfolk, poor people, and the elderly."

In the context of COP26, the most obvious example is the disjuncture between more developed and wealthier countries in the Global North that have historically benefited from the burning of fossil fuels since the start of the Industrial Revolution, and less developed and poorer countries in the Global South that have benefited much less from the burning of fossil fuels. Those in the Global South, through quirks of geography and climate, are much more vulnerable to the manifestations of climate change, such as increased warming temperatures, droughts, floods, more extreme storms, increased disease, crop failures, climate migration, and increased climate change-related social conflict. Climate justice is a rights-based approach to addressing this problem.

The notion of climate justice originates with the earlier concept of environmental justice — the idea that different groups in society are disproportionately exposed to environmental harms, and that this situation needs to be addressed. Environmental justice acknowledges there are disparities between different groups in the quality of the environments in which they live and work. Research has shown the degree of pollution in environments tends to be correlated with race and ethnicity, with minority groups such as African Americans, Native Americans, and Hispanics being much more likely to live near toxic sites and face other environmental risks.

In Canada, one of the most striking aspects of climate justice is the disparity between Indigenous peoples and settler society. Indigenous communities are more likely to be located in remote, rural, and less urban areas compared to the rest of the population. Such communities are often more vulnerable in terms of climate change-related risks, such as wildfire and flooding, and tend to have much less infrastructure and resources to help cope with climate-related emergencies.

One of the places experiencing the greatest climate changes is the Arctic, where average temperatures have increased more than anywhere else on the planet. This has had severe consequences for Inuit communities. Melting permafrost is disrupting northern infrastructures, negatively affecting wildlife, and the changing climate has significantly affected traditional ways of life, such as hunting and fishing practices. (Further, melting ice and melting permafrost have led to a feedback loop that increases global warming as methane is released into the atmosphere, and the loss of ice leads to more absorption of the sun’s radiation by the Earth.)

Historically, Indigenous people have disproportionately been excluded from the benefits of natural resource exploitation (such as oil and gas production, and timber harvesting) on their traditional territories and the economy in general. In Canada, they have also suffered from the residential school system and other facets of colonialism.

Opinion: In Canada, one of the most striking aspects of climate justice is the disparity between Indigenous peoples and settler society, writes @dbtindall. #COP26 #COP26xCNO

Some issues for COP 26

Returning to COP26, there are a number of climate justice issues that have been discussed and negotiated at the COPs over the years.

A particularly “thorny issue” is what is referred to as “loss and damage.” Countries from the Global South contend they are more likely to suffer from climate change, and given they have contributed very little of the greenhouse gas emissions, argue they should be financially compensated. This issue has been discussed over several COP meetings, but key Global North countries have opposed this proposal. In fact, at the Paris COP meeting, Canada joined the U.S. in resisting making compensation a core part of the Paris Agreement.

On Thursday at COP 26, a European Union representative said the EU is opposed to making liability and compensation a part of any agreement coming out of Glasgow. But he noted the EU is committed to supporting developing countries in a number of other ways, including early warning technologies, insurance for small farm-holders, and assistance for disaster recovery.

Another aspect of climate justice has emerged at COP26 around participation and COVID issues. Before the conference, some NGOs called for the conference to be cancelled altogether because of the global inequalities regarding vaccine access. Vaccine availability and vaccination rates are far lower in many developing countries than in the Global North. Travellers who arrive in the U.K. unvaccinated are required to take additional COVID tests (compared to those who are fully vaccinated) and must also quarantine for 10 days. This heaps on considerable additional costs for people coming from developing countries.

Several other complications were recently discussed at a Climate Action Network press conference. COVID protocols have limited the number of attendees at the COP26 venue and in particular rooms. Priority is given to the parties involved in the negotiations. Hence, there are very few spaces available for NGO observers. After obtaining funding for travel and accommodation, clearing vaccine and testing hurdles, and travelling halfway around the world, NGO observers from developing countries may still find themselves unable to get in the negotiation room.

To a certain extent, support for addressing climate justice depends on one’s political and moral philosophy. However, regardless of one’s political perspective, there is a practical element to these issues. Many countries in the Global South are unlikely to agree to freeze their development at current levels and are unlikely to be willing or able to take bold climate action without financial assistance. So even for global leaders who are less sympathetic to the moral aspects of this issue, addressing climate justice issues is a practical reality if a deal is to be made.

On the other hand, with the winds of populism still circulating within some Global North countries, selling populations on large financial transfers to help achieve a climate deal is a challenging task. These are some of the things that make solving anthropogenic climate change a “wicked problem.”