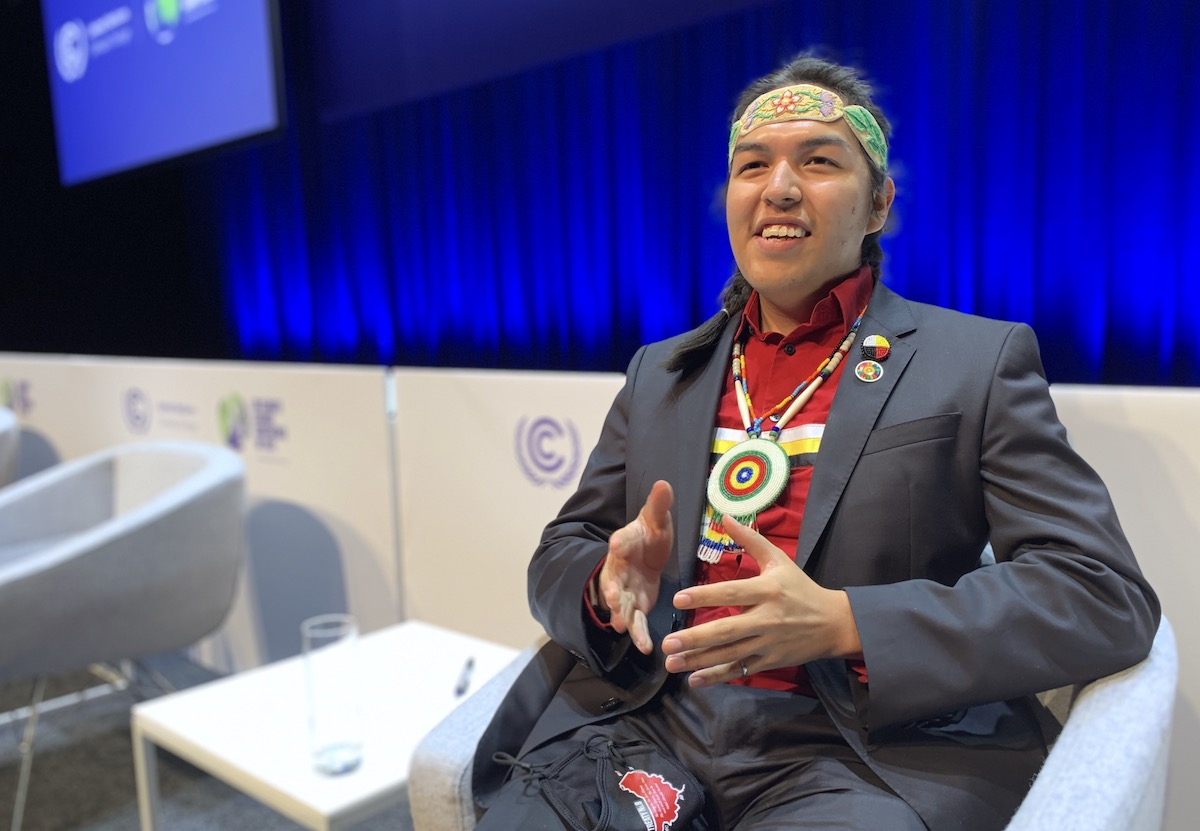 Mihskakwan James Harper, a member of the Indigenous Clean Energy team at COP26, was part of the discussion about how renewable energy projects can align with UNDRIP. Photo by Rochelle Baker / Canada's National Observer
Previous story
Next story

There is a strong alignment between clean energy project development and the principles of the United Nations Declaration on the Rights of Indigenous Peoples (UNDRIP), said Eryn Stewart, the managing director of the non-profit Indigenous Clean Energy (ICE).

“We have found that if clean energy projects are done so Indigenous communities are actually empowered to lead it results in energy security, energy sovereignty, and energy resilience,” said Stewart at the COP26 Indigenous Peoples Pavilion on Wednesday.

“If projects are done that way — and not by developers knocking on the doors — that’s a true, meaningful, and just energy transition.”

“And as soon as you can show what energy means to so many different things, then people get more interested.”

The sector is growing fast, with medium to large Indigenous renewable energy projects seeing a growth rate of close to 30 per cent across Canada since 2017, according to ICE.

There are almost 200 Indigenous communities in Canada involved in clean energy projects over one megawatt — roughly the amount of electricity consumed by 400 to 900 homes annually, Stewart said.

The Indigenous Clean Energy team is at #COP26 in Glasgow, Scotland, showcasing existing projects and pushing to ensure Indigenous peoples in Canada, and around the world, shape the renewables roadmap moving forward. #COP26xCNO

The communities’ type of involvement can range from impact benefit agreements (IBA), partnerships, or the direct ownership of clean energy projects, all of which can generate jobs, training opportunities, and a source of revenue.

The ICE team is at COP26 in Glasgow, Scotland, showcasing existing projects and pushing to ensure Indigenous peoples in Canada, and around the world, shape the renewables roadmap moving forward.

But clean energy projects — be they hydro, wind, solar, tidal, or geothermal — need to be developed in conjunction with Indigenous people in their territories and to their benefit, said ICE team member Leona Humchitt.

Many Indigenous people in Canada have a tense history with hydro projects imposed on them by colonial governments or corporations, said Humchitt, a councillor and climate action co-ordinator for the Heiltsuk First Nation on the isolated central coast of British Columbia.

Not only was a hydro project built in their territory without their consent, said Humchitt, but the Heiltsuk must also pay for the energy derived from it.

“In my opinion, there should be no hydro energy projects going forward if Indigenous ownership has not been offered in their territory. Period,” Stewart agreed.

Mihskakwan James Harper, also a delegate with ICE at the summit, said there is much leadership and opportunity around Indigenous clean energy projects, but significant challenges remain — with financing being one of the biggest stumbling blocks.

Harper, from Sturgeon Lake Cree Nation in Treaty 8, Alberta, is also a business development manager at NRStor Inc., an energy storage company that has partnered 50/50 with the economic development corporation of the Six Nations of the Grand River in Ontario.

The project, one of the world’s largest battery energy projects in the world, will provide clean, steady power capacity by drawing and storing renewable energy in off-peak hours and releasing it to the Ontario grid when demand is high.

The project is expected to drop Ontario’s greenhouse gas emissions by 4.1 million tonnes — the equivalent of removing 40,000 cars off the roads annually. Plus, provincial utility users benefit by reducing the demand and costs associated with using gas-fired power plants during peak periods.

The journey to this stage of the project was a long one, Harper said.

One of the financing vehicles the project relied on was $170 million from the Canada Infrastructure Bank (CIB), he said, adding more typical financing was sourced as well.

But there need to be more mechanisms for financing in an equitable way, so Indigenous nations are stakeholders in renewable projects in their own territories, he said.

“So this is also an important advocacy piece because private partners and government players also need to understand these realities,” Harper said.

“I can confidently say there needs to be way more programming and way more policy change in this space. But we're getting there.”

Harper acknowledged a number of Indigenous communities are involved in extractive industries and the fossil fuel sector given the need to provide for their members and a lack of alternate options under the colonial system.

“I wholly trust individual nations to make the best decision for themselves, while also saying that it’s not the only way,” Harper said.

“Clean energy projects through the framework of UNDRIP … better address the wrongdoings of colonization and really empower communities in a better way than large-scale extractive projects.”