These 20-somethings say climate action must involve food security, too 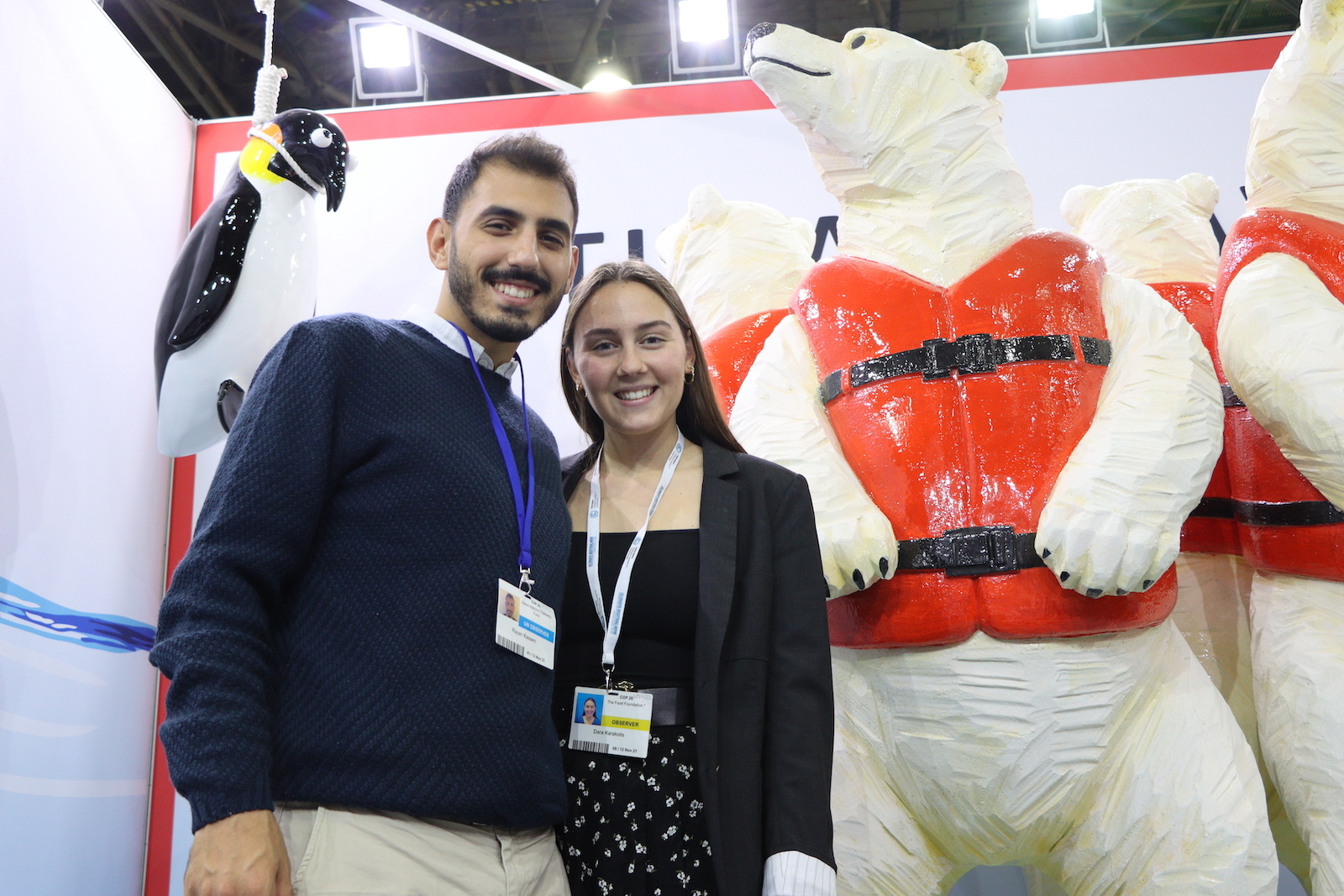 Rayan Kassem and Dara Karakolis of Act4Food Act4Change are youth representatives from Lebanon and Canada at the UN's climate conference in Glasgow. Photo by Marc Fawcett-Atkinson / Canada's National Observer
Previous story
Next story

"We came here thinking that people don't know about the intersection between food systems and climate. What we realized is that they all know about it, but just aren't working to fix it," said Kassem of Act4Food Act4Change at the UN's climate conference in Glasgow on Tuesday.

Kassem is a delegate belonging to YOUNGO, the UN’s forum for non-governmental organizations representing people under 35.

"I'm a firm believer that I am on Earth to thrive, not (just) to survive," he explained. To thrive, he said, people need quality food, a healthy environment, and a good work-life balance.

All are threatened by climate change, which is predicted to undermine crops worldwide and leave billions hungry if nothing is done to avert the crisis.

Food accounts for about a third of the world's greenhouse gas emissions, and agriculture is the largest driver of deforestation worldwide. At the same time, the UN estimates about 811 million people have an insecure food supply, and climate change is expected to exacerbate the problem by making vast swaths of land sterile and raising food prices.

In politically unstable Lebanon, for example, citizens are struggling to buy food so changing their diets to eat less meat, and therefore produce fewer emissions, is not on the table, he says.

"I care because I know we can do something about it and we're not doing it. It really pisses me off. We have the answers, we have the solutions and we just haven't done (anything) yet."

He wants countries to tackle the interlinked problems of deforestation and greenhouse gas emissions from food production together with poverty and hunger.

Yet food plays only a minor role in global climate negotiations currently taking place at COP26 in Glasgow, Scotland. Short for conference of parties, COP brings together member countries of the UN Framework Convention on Climate Change (UNFCCC) to hammer out a climate deal. Officially, hunger and poverty reduction appear nowhere in this international forum — to Kassem's frustration.

"I care because I know we can do something about it and we're not doing it. It really pisses me off. We have the answers, we have the solutions and we just haven't done (anything) yet," said Lebanese food and climate activist Rayan Kassem.

That's partly because of how national and international policies and rules for food are created, he said. COP's mandate is primarily focused on climate, limiting its reach over food systems to agriculture. Other UN mechanisms like the Committee on Food Security deal with hunger and poverty.

This divide between climate and food security at the international level is also reflected within countries' food policies. The ministers and negotiators working on climate issues typically don't work with their national counterparts dealing with poverty. It's an approach that is preventing countries from working "holistically" to tackle the problem, he said.

"This idea that you're specializing in one thing — it's not working anymore."

The result of this inaction has been a fragmented approach to solving the problem that has, in some cases, put an undue burden on individuals.

For example, environmental groups — and dozens of companies — are encouraging people to adopt more plant-based diets. Eating less meat is one of the most effective ways individuals can reduce their emissions, especially in wealthier countries, according to the EAT-Lancet Commission on Food, Planet, and Health.

Those marketing efforts have paid off, especially in wealthier countries like Canada and the U.S. where there is growing demand for plant-based foods. In 2020 alone, the U.S. market for alternative proteins like plant-based and lab-grown meats soared to about US$7 billion, according to the Good Food Institute.

But despite the hype, designer foods alone can't save the world.

"If we're going to speak globally, (the solution) can't be all plant-based," said Dara Karakolis, a Canadian public health nutritionist and global youth coordinator for the Act4Food Act4Change campaign.

"In wealthier countries, we have the possibility to lean more towards plant-based diets (especially because) we do have a high consumption of meat. But in other countries, either they can't make that complete transition, or they have needs like deficiencies or cultural considerations that wouldn't make it practical to shift to all plant-based diets."

"We need to reframe the way we think of food systems," while trying to make food and diets more sustainable, added Karakolis. "(Kassem's) situation in Lebanon clearly shows that political issues and economic issues are all completely related to food — and we need to think about that."

Focus on food technology at climate conference ignores what most of the world’s farmers need, experts say

"What's the point of serving plant-based foods that people (don't like), and never want to eat plant-based again?"

That there is a plenitude of

That there is a plenitude of lousey cooks isn't a reason to conclude that vegetarian food is terrible.
People who flew to "the COP" have four years' worth of carbon footprint to correct. Try making those 4 years vegan. Cook from scratch, not from packages of pre-processed stuff -- that defeats the premise of the exercise.
I wonder what the carbon footprint is of some of those manufactured "plant-based" products.
Last I heard, over-processed food (and that's what hydrolyzed protein is) and the nutritionally questionable other ingredients aren't part of an earth-saving diet.
There's no need to make something "taste just like beef" in order to get people to eat less beef. Make the cost of beef include its excessive carbon footprint (hey: if it can be done with necessities (non-negotiable things like heat in winter) it certainly can be done for mere preferences, especially when those preferences drive a great deal of our health costs.
Do the same with dairy products. Past the age of weaning, there's no nutritional or health-based need for them, at all.
And get a good vegan recipe book. One that doesn't start a recipe with, "One package" or "one tin" of anything ...

(And as we have all known for a long time now, almost *everything* "tastes just like chicken.")