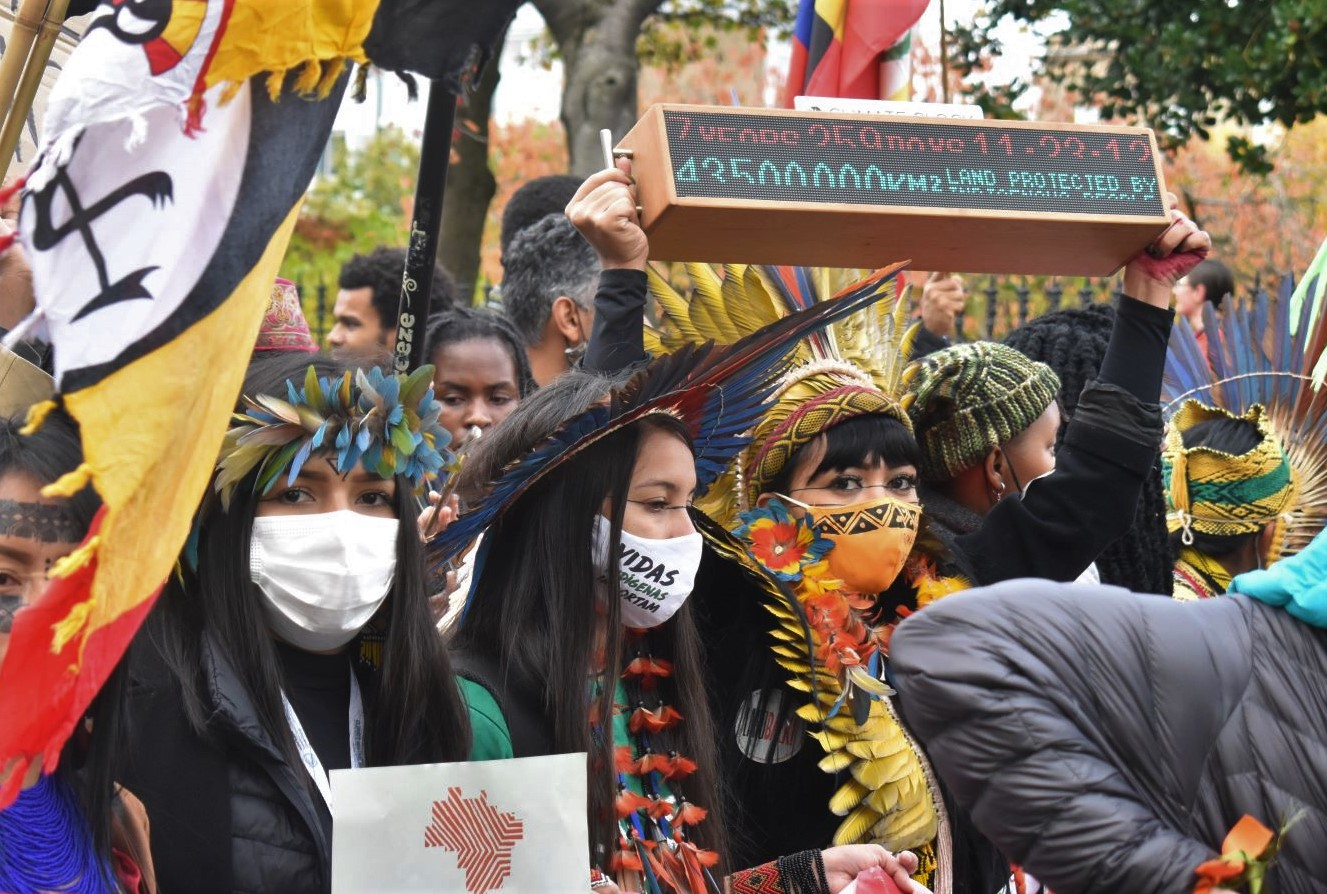 Young Indigenous Land Back protesters march in Glasgow on Nov. 5, 2021 where the global climate talks were underway. Photo by: Nora Legrand
Previous story

Among a particular subset of Indigenous leaders, activists and youth — the subset that comprises, I should disclose, a significant share of my professional network and social media feed — the annual United Nations Climate Change Conference has become a more or less yearly fixture on the calendar.

It’s a time when us environmentally concerned Natives consider packing our bags — including, more likely than not, some handcrafted items from our prized traditional regalia — and jetting off to whichever far-flung global city is hosting, feathers, beads and ancestors’ dreams in tow. If I were to plop those talks into my Secwépemc peoples’ traditional calendar, the late summer and fall would look something like: pick berries, fish salmon, hunt deer and the occasional moose, talk climate, move into the pit house, share stories and tell jokes, freeze our collective asses off.

If this sounds a bit flippant, I should say that climate change is deadly serious. The UN describes anthropogenic warming as “code red for humanity.” Its environmental, political, social, economic and cultural consequences fall most heavily on Indigenous peoples, whose lifeways are already threatened by the status quo. In many parts of the world, Indigenous groups are marginalized and persecuted. Our lands have been encroached upon and what remains, is under near-constant threat. Our religions and cultures have been outlawed and, in some places, are still targeted by government policies explicitly designed to bring them to an end. As droughts intensify, seas rise, forests burn and turn to desert and communities are dislodged from formerly habitable patches of earth, igniting new conflicts over resources and power, First Peoples face a grave and uncertain future.

We stand to lose not just our lands and ways of life, but also our languages and very identities. When there’s no Arctic sea ice left in the summer, what will it mean to be Inuit — a people who still hunt sea mammals through the holes in the ice? When the last salmon swims up the Fraser River, how can we still be Salish — salmon people? And when the Marshall Islands are swallowed by the Pacific, what will the Marshallese call themselves? Can you be an islander without an island to call home? You see for the Indigenous, climate change is a matter of life or death.

And so this year, as in years past, many of my friends — and one or two who I’d even dare to call my relations — packed their bags for Glasgow, a Scottish port city in the United Kingdom that once played a prominent role in the ignominious trade of American tobacco, cotton and sugar.

Among them was Fawn Sharp, the first woman elected president of the National Congress of American Indians, the body that represents and advocates for American Indians and Alaska Natives in Washington, D.C. Sharp is the vice-president of the Quinault Nation, a tribe from the west coast of Washington state. The Quinault, like many other Indigenous nations, live with the metastasizing cancer of climate change at their doorstep. Their primary village of Taholah is now being relocated to higher ground because of rising seas. Every summer, their forests are threatened by wildfires. And as the waters of the Pacific warm, their blueback salmon, which once numbered in the millions, return in runs of just a few thousand.

Perhaps unsurprisingly, Sharp has been one of the most outspoken tribal advocates for policies to address and adapt to global warming as well as for justice for the victims of climate change — especially and specifically for the Indigenous. At COP26, the U.S. State Department gave Sharp diplomatic credentials, making her the first tribal leader to ever serve as part of a United States delegation, giving her — and us — a literal seat at the table. At almost all of her public engagements, Sharp wears a traditional cedar bark hat, the kind worn by members of her tribe’s ocean-going canoe society. I imagine this was the first time one was worn by a delegate at a climate summit.

At COP26, Sharp was joined by dozens of other Indigenous leaders and activists. Some, like U.S. Interior Secretary Deb Haaland, hold important policymaking roles in their national governments. Others were tribal leaders and youth activists who see their roles as advocates for their peoples, generations and homelands to world leaders who are quick to overlook us. And while their presence marked a welcome turn towards further Indigenous inclusion and representation at the international level, many participants expressed frustration at what they experienced as a tokenizing dynamic at the climate talks, where world leaders — particularly ones representing liberal regimes — are happy to pose for photos with traditionally garbed Indigenous peoples but are also quick to leave the room whenever one gets on the microphone.

Explicit racism might be out of fashion among the multicultural global elite, but a softer prejudice — one that asks Indigenous peoples to show up as victims dressed in traditional outfits speaking for “Mother Earth,” a representational politics that smacks of the “noble savage” trope — persists.

There’s a rather literal structural reason for this. The United Nations Climate Change Conference is organized a bit like a corporation, a bureaucracy or — maybe if you’re more prone to cynicism — like Dante’s Nine Circles of Hell, with concentric spheres of access, influence and sin. The innermost circle, the global equivalent of the climate C-Suite, belongs to the countries that have signed onto the 1997 Kyoto Protocol. President Sharp was the first tribal leader to formally participate as a diplomat in this space. The second circle belongs to the NGOs, businesses and other organizations with an interest in climate change. (Think: grey-suited technocrats, slick corporate lobbyists and the occasional non-profit leader.) Some particularly wonky and connected participants in this tier may even be invited into the inner circle to observe, but never to formally participate, in negotiations. The third and outermost circle is the domain of the public and, often, of activists. Generally, as you descend into the innermost circles of the climate talks, you’ll find more power and fewer Indigenous peoples and as you move outwards, you’ll find less power and more Indigenous peoples.

At #COP26, where #Indigenous people were invited to show up in traditional dress but given no negotiating power, the “noble savage” trope persists, @jnoisecat writes for @natobserver. #IndigenousRights #EnvironmentalJustice

While a few Indigenous leaders, like Sharp, now have some marginal influence on negotiations, most, in reality, do not. And this has real-world consequences. In Glasgow, Indigenous peoples hoped to ensure their rights were protected in the implementation of emissions trading markets — the kind outlined in Article 6 of the Paris Agreement — which will pay governments, corporations and communities to protect forests as natural carbon sinks. Depending on how these markets are implemented, they can either empower or dispossess Indigenous communities.

In coastal British Columbia, for example, First Nations like the Nuxalk have used carbon credit revenues earned through the protection of forests — essential natural sinks that keep carbon in trees rather than in the atmosphere — to fund programs that empower their people as the rightful environmental stewards of their traditional territories. (This, as I reported in a 2018 article for Canadian Geographic, is a good thing for them and the climate.) Elsewhere, however, Indigenous peoples have either been excluded from carbon markets or seen themselves locked out of their own lands because of them.

In Peru, for example, the government has sold carbon credits created by conserving the forested homelands of the Indigenous Kichwa to corporations like Shell, Ben & Jerry’s and British Airways. The Kichwa say they have never been consulted about this and do not benefit from the arrangements. In California, to cite a different example, the Yurok have protected their forests in an effort to receive carbon credit revenues only to discover that the stringent rules attached to those credits prevent them from using their ancestral lands for traditional uses. As the global fight against climate change picks up momentum, it’s not hard to imagine the emergence of emissions trading schemes that look a lot like the more sordid chapters of the land-grabbing colonial past.

In Glasgow, Indigenous peoples secured language calling on parties to the COP26 agreement to “respect, promote and consider their obligations on human rights, the right to health and the rights of Indigenous peoples” in the implementation of climate solutions, but, crucially, we did not secure the creation of an international forum to protect those rights if and when they are violated.

“Indigenous peoples had a clear vision for COP26,” wrote United Nations Special Rapporteur on the Rights of Indigenous Peoples Victoria Tauli-Corpuz in The Guardian. “But it has not been delivered.” It seems that this year, like many before, an awful lot of Indigenous peoples travelled to the climate talks to plead for world leaders’ attention by performing a combination of traditional culture and social victimhood, only to be patted on the head. There’s a fine line between having a seat at the table and being a lap dog.

As I write this column, the entire city of Merritt, B.C., population 7,000, is being evacuated after flooding overwhelmed its wastewater system, filling the streets with sewage. Merritt isn’t in my peoples’ homelands, but it’s not far from them. It’s a place where many of our community members end up looking for a job, a home or a relationship. While part of me wouldn’t mind if Indigenous peoples turned our back on these hypocritical world leaders’ “climate talks,” like the Native guy in Lawrence Paul Yuxweluptun’s aptly titled 1990 painting Red Man Watching White Man Trying to Fix Hole in the Sky, I know that with everything going to shit, that’s not really an option.

Next year, I’m sure many of my friends will pack their bags with their finest Indian clothes for another climate summit where they will mostly be denied a seat at the table and paid little more than lip service. There’s something incredibly brave in their act but there’s also something absurd in a system that creates that imperative.

>and jetting off to whichever

>and jetting off to whichever far-flung global city is hosting

They just shouldn't have gone. Not to Glasgow. Some demonstrations at home, for sure.

It was embarrassing, for the cause, to see all the various activists there, who had clearly come by air. There were so many, they could have chipped in and rented a sailboat ride from the kind of hobbyists that transported Thunberg twice.

It wasn't embarrassing to see climate activists flying until after (a) Thunberg and (b) the declaration of "climate emergency". You can't keep traveling by air after the example has been set, a standard upheld - or, at least, you can't ignore that example and also use the word "emergency" with a straight face.

I'll be looking forward to seeing whether Calgary's new Mayor forbids air travel to herself and senior staff, because you don't emit a tonne of carbon just to save yourself eight days in a bus or car on a round-trip to Ottawa. You spend the 8 days, four each way, like they did in 1951, before affordable airlines, because it's not worth a whole tonne of carbon. It's an emergency. Or it's not, in which case you can fly, but not say the E word.