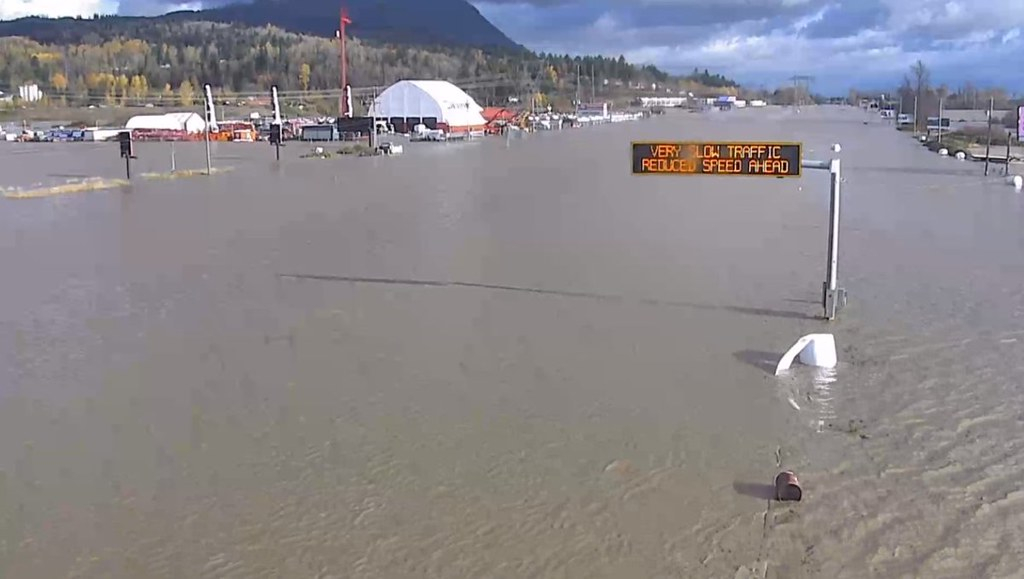 Highway 1 in Abbotsford under water on Nov. 16, 2021. Photo by B.C. Ministry of Transportation and Infrastructure / Flickr (CC BY-NC-ND 2.0)
Previous story
Next story

Petroleum slicks, human and animal waste, deceased animals and garbage. All this and more have been spotted floating in the water by volunteers working to salvage B.C. homes and communities flooded after the recent catastrophic storm.

New information is coming out about the contents of the water, with the Abbotsford News reporting on Friday that asbestos fibres are likely in the floodwaters in the Fraser Valley. Toxic waste like that will impact the habitat of aquatic and plant life, pollution experts say.

There’s the question of raw sewage, like in Merritt where the failure of the city’s wastewater treatment plant prompted thousands to evacuate, which John Richardson, a professor in the department of forest and conservation sciences at the University of British Columbia, said may be less problematic than other pollutants for wildlife. However, its failure means the entire community’s drinking water supply is tainted.

Freshwater systems can break down organic materials, but non-organic pollution can be especially harmful. Richardson is more concerned about fuel and manure storage tanks in the Abbotsford farmland area. The floodwaters will likely have flushed them out, he said. “That will include fertilizers, gasoline and other petroleum products. It'll probably include lots of pesticides because a lot of these farms still use a fair amount of pesticides, fungicides or herbicides and things like that.”

There will likely be fairly high concentrations of those kinds of things as a consequence, Richardson added, which he said will be hazardous to fish and the thousands of organisms they feed on.

Although the effects won’t be known until a proper assessment is done, he is crossing his fingers that the high water volumes will dilute the toxins.

The turbidity of the water — cloudiness caused by sediment — is also a concern for drinking water and ecosystems alike, he said. Sediment can settle on salmon eggs, get in their gills and disturb their habitat.

Although all flooding events are unique, some aspects of the B.C. disaster can be compared to others in Canada, said Tim Gray, executive director of Environmental Defence.

"Whenever these things happen, you get things like these big animal agriculture facilities ... you end up with all the manure from those huge ponds going into the streams, into the ... lakes here," he said.

“For example, same thing [with] the big floods that have been occurring in Manitoba, those sewage ponds going into the Red River.”

Petroleum slicks, human and animal waste, deceased animals and garbage. All this and more have been spotted floating in the water by volunteers working to salvage B.C. homes and communities flooded by the recent catastrophic storm.

A 2018 study done by academics, including Elena Bennett from McGill, on flooding across the world, said the effects of flooding on freshwater aquatic ecosystems can be difficult to assess, and often go unaddressed.

The study looked at the effects smaller floods (with a 10-year recurrence rate) and extreme floods (a 100-year occurrence rate) had on ecosystems. Although severe flooding is expected to get more intense with climate change, Environment Canada called the B.C. event a one-in-100-year event.

“Extreme floods resulted in losses in almost every ecosystem service considered in this study. However, small floods had neutral or positive effects on half of the ecosystem services we considered,” reads the report, noting that water regulation and recreation opportunities can increase after smaller floods.

“For example, small floods led to increases in primary production, water regulation, and recreation and tourism. Decision-making that preserves small floods while reducing the impacts of extreme floods can increase ecosystem service provision and minimize losses.”

While B.C. continues to assess the flood damage, Gray says the best thing to preserve habitats from extreme weather is prevention. That includes restoring forest cover and other flood management practices, he said.

“... You really have to think about redoing all the flood mapping and be very aware of what you're building in places that are within that 100-year floodplain because the floodplain is probably a one-in-five-year floodplain now,” he said.

Facilities like chemical plants have no place in a flood zone, he noted. “You need to get them in a place where breaching of those facilities is not going to happen.”

Thank you for this reporting.

Thank you for this reporting. It's bad enough to know that raw human sewage has made its way into our river systems. It's even worse to find out that toxic chemicals are in the mix. Another blow to wild salmon and all life in these ecosystems. More sadness...

This "small floods do good

This "small floods do good half the time" bit sounds to me like excuses for being asleep at the switch till the big ones come.

Especially when one breaks down the grammar, and realizes they're saying, "Well half the time, we make better laws after them."

Disgusting, that's what it is.

The current situation is saddening beyond measure. But what I feel is not only sadness, but growing anger.