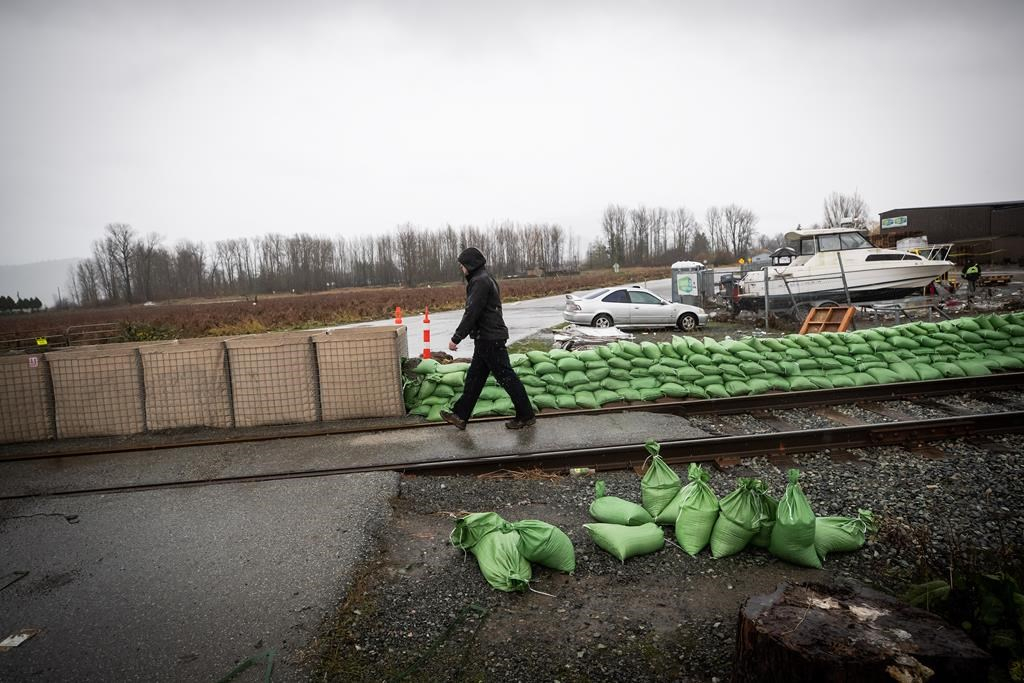 Bins of sand are placed across the road next to a wall of sandbags along rail tracks to form a temporary dike in the Huntingdon Village area of Abbotsford, B.C., on Sunday, Nov. 28, 2021. Photo by The Canadian Press/Darryl Dyck
Previous story
Next story

Residents of another handful of properties in Abbotsford, B.C., were ordered to evacuate late Sunday night while some others were placed on evacuation of alert due to the continuing flood threat.

Meanwhile, crews in the city, including members of the Canadian military, worked through the night to pump water into so called tiger dams that have been set up in a desperate effort to try to hold back floodwaters from the Sumas River.

The second in a trio of intense rainfalls subsided in many areas Sunday, however Environment Canada warned that associated warming had pushed freezing levels well above mountain tops. That means snowmelt is flowing into runoff, causing rivers to rise and increasing the risk of flooding.

The District of Hope declared a state of emergency yesterday while new evacuation orders were issued in parts of Abbotsford and west of Merritt.

A third storm in the series of devastating atmospheric rivers is forecast to arrive on Tuesday and Wednesday and officials have warned that it could be the worst one yet.

Public Safety Minister Mike Farnworth says the province is prepared to use Alert Ready, a system that pushes emergency notifications directly to cell phones, if local authorities believe the next storm poses a threat to life or public safety.