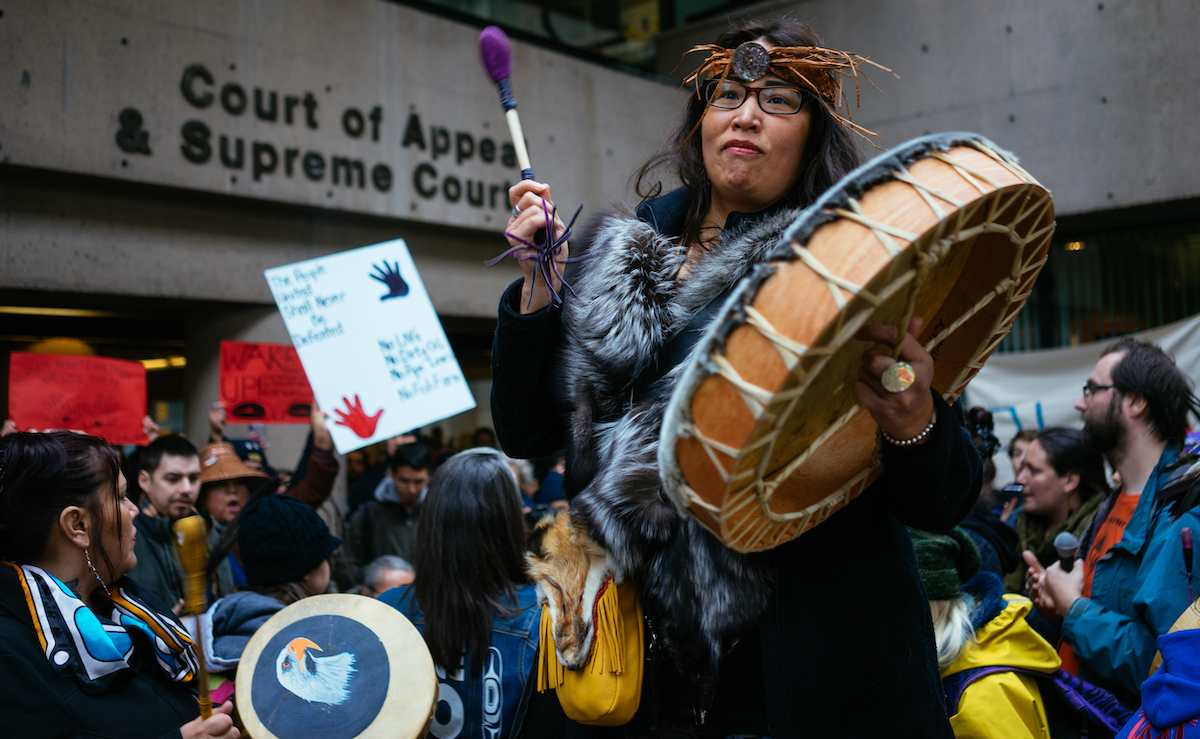 Hundreds of academics have signed an open letter calling for government intervention in the wake of RCMP enforcement of an injunction granted to Coastal GasLink to build a pipeline through unceded Wet’suwet’en territory.

The letter says historically Canada has allowed its laws to be “wielded as a weapon against Indigenous jurisdiction and grasped as a tool for Indigenous genocide.” The letter condemns “aggression” by police forces and “the complete disregard for Indigenous sovereignty and environmental protection it reveals.”

The letter was signed by prominent academics like University of British Columbia climate justice professor Naomi Klein; author of Red Skin, White Masks Glen Coulthard, who also teaches out of UBC; and co-founder and former research director of the Yellowhead Institute Shiri Pasternak.

“Unless an immediate retreat of the RCMP is implemented and the injunction order lifted, the federal government’s tacit approval of these acts will stand as proof not only of the shallow nature of the stated commitment of federal and provincial levels of government to Indigenous rights and reconciliation, but also the hollowness of PM Trudeau’s statement at the recent COP26 in Glasgow that Canada will take a ‘leadership role in the fight against climate change,’” the letter reads.

The letter outlines specific calls to action for governments. It calls on the federal government to study the use of injunctions against First Nations in the context of charter rights and to commit to decarbonization without using natural gas, and urges British Columbia to cancel permits issued to Coastal GasLink.

“The provincial government’s authorization of permits for construction of Coastal GasLink arises from a racist anthropology of discovery and claims to underlying title to lands that have never been the province's to grant,” the letter reads.

“The injunction against the protesters was granted to Coastal GasLink based on these false presumptions, creating a legal house of cards.”

Among other calls to action are a ban on fossil fuel expansion given the climate crisis at hand, a plea for Coastal GasLink to drop charges against the 29 people who were arrested last month, and a call for the RCMP to drop its use of exclusion zones to enforce the injunction.

The open letter comes days after a separate letter was written to Prime Minister Justin Trudeau expressing alarm at megaprojects like Coastal GasLink, the Trans Mountain expansion project and the Site C hydro dam continuing to be built, even after the United Nations Committee on the Elimination of Racial Discrimination (CERD) called on Canada to halt all three due to human rights concerns.

The letter to Trudeau was signed by Indigenous rights groups, climate advocacy organizations and a flock of academics just days after a formal submission to the UN’s CERD to update on Canada’s progress, or lack thereof.

“Unless an immediate retreat of the RCMP is implemented ... the federal government’s tacit approval of these acts will stand as proof of the shallow nature of the stated commitment (to reconciliation)." #Wetsuweten #CoastalGasLink #cdnpoli

That submission says the RCMP, with the aid of the provincial government, committed “human rights violations during the course of the forced eviction of Wet’suwet’en land defenders at Gidimt’en Checkpoint and Coyote Camp.”

A spokesperson for ​​Crown-Indigenous Relations Canada Minister Marc Miller recently told Canada’s National Observer that while Coastal GasLink and RCMP enforcement are under provincial jurisdiction, the federal government is committed to negotiations with the nation.

“The Hereditary Chiefs, the Government of British Columbia and the Government of Canada are discussing how to implement Wet’suwet’en rights and title, as noted in the Memorandum of Understanding signed on May 14, 2020,” said spokesperson Jordan Ames-Sinclair.

“As negotiations proceed on the affirmation and implementation of Wet'suwet'en rights and title, the Wet'suwet'en collective — hereditary chiefs, elected representatives, and community members — will need to work to develop their own governance, with the support of Canada and British Columbia.”

‘Electrify transport’? Canadians stomp on the gas instead

The fact that the Amnesty

The fact that the Amnesty International, UN Human rights panel etc. condemn Canadian police and military attacks on First Nations just never seems to make the mainstream news . Funny how that gatekeeping works to maintain status quo of investments by big banks, big oil through the corporate media (that their friends own)

1. Marc Miller's passing the buck between the federal and provincial governments serves to continue the colonial approach, and results in NO CHANGE!
2. May 14, 2020's "Memorandum of Understanding" serves to delay any real action to change the situation in B. C. until long after CGL has completed it's rape of not only the land and resources in Wet'suwet'en territories, but also of the people there.
3. Telling the Wet'suwet'en nations to "develop their own governance" is a SUPREME INSULT!!! Yet again, colonists have chosen to ignore the reality that Indigenous "governance" has been in existence - successfully so - for millenia, and the present difficulties are the result of colonial interference!