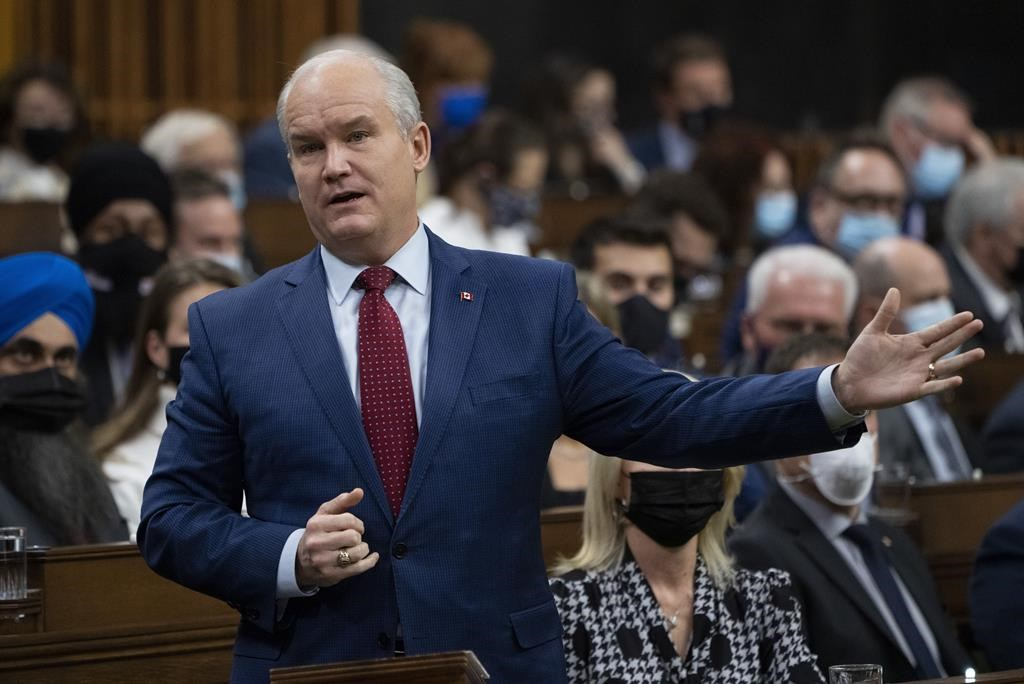 Conservative Leader Erin O'Toole questions the government during Question Period in the House of Commons, on Thursday, November 25, 2021 in Ottawa. File photo by The Canadian Press/Adrian Wyld
Previous story
Next story

Canada's House of Commons erupted into a scene of cheers and cross-party hugs Wednesday as MPs unanimously adopted a motion presented by a Conservative MP to fast-track the passage of a Liberal government bill banning conversion therapy for LGBTQ Canadians.

That legislation, introduced earlier in the week, will now proceed to the Senate, as no MP spoke out against the move to skip the routine legislative debate.

The lightning-fast speed at which it unfolded was initiated in the House by Conservative justice critic Rob Moore, who presented the motion during Wednesday's sitting after the Tory caucus met earlier in the day.

Good news! Today, Members of Parliament worked together to pass our government’s legislation banning conversion therapy - and it is now headed to the Senate. We’ll keep working to make sure this abhorrent and unacceptable practice is prohibited in Canada.

The only hint something may have been afoot came from Conservative Leader Erin O'Toole who, after leaving the meeting, told reporters his caucus planned to accelerate the bill's passage, but without providing any specifics.

After the motion was approved by the House, Liberal Justice Minister David Lametti emerged to provide some credit he felt was due.

"There are clearly people in the Conservative caucus that we need to thank," he said, flanked by some of the Liberals' openly gay ministers.

"There are clearly people in the Conservative caucus who exercised a great deal of leadership on the issue, and I thank them. I thank them sincerely. They have done a very important thing for Canadians."

Conversion therapy, as it's called, is widely discredited as a harmful practice, aimed at trying to change an individual's sexual orientation or gender identity.

The government's gratitude for the Conservatives' handling of the legislation to criminalize the practice represented a dramatic shift from just a few months ago, when MPs debated an older version of the bill.

At that time, 62 out of O'Toole's 119 MPs voted against the legislation, which passed the House but failed to clear the Senate before it rose for summer, and ultimately died when Prime Minister Justin Trudeau triggered an election.

Numerous Conservative MPs — namely those who hail from its social conservative wing — complained at the time the wording of the bill was overly broad and could criminalize conversations about sexuality between children and their parents or with religious leaders.

That vote prompted a backlash, with critics charging that O'Toole had failed to live up to his more progressive rhetoric on LGBTQ issues.

Five months later and faced with another vote, O'Toole's office said Tuesday he would again let MPs have a free vote on the new bill, which prompted criticism from at least one advocacy group that pushed for it to be supported by all parliamentarians.

Wednesday's motion to fast-track the House's process, however, meant that no recorded vote needed to be held.

"I think political people in this country do not want to be on the record anymore opposing LGBTQ issues because they're fundamental human rights," said Tourism Minister Randy Boissonnault.

"We said that we wanted people to be on the right side of history … nobody can consent to torture, and so I think that message got drilled home by leaders in the Conservative party."

Boissonnault added he believes that leadership came from O'Toole's front and mid-benches — not from MPs from his backbench.

Labour Minister Seamus O'Regan told reporters he believed Michelle Rempel Garner, a well-known Conservative MP who has long advocated in favour of LGBTQ rights, had something to do with it. She was among Tories who Liberal ministers hugged in the House.

As for who it was that drummed up the idea, Tory House Leader Gerard Deltell would only say the legislation was discussed by caucus earlier in the day.

And as for the Conservative MPs who had gone on record as taking issue with the government's previous version of the same legislation, Deltell said they were able to say their piece in the last Parliament.

He characterized Wednesday's motion as returning the proposed ban to the same place it was before Trudeau triggered what Conservatives panned as an unnecessary and costly federal election, which reset the legislative agenda.

The move by O'Toole to speed up the passage of a bill that stirred some controversy in his caucus ranks comes as he tries to turn a page on the party's disappointing election loss and broaden its support with Canadians, namely those in urban and suburban Canada.

Conservatives will also have to deal with another government bill related to COVID-19. The two-pronged bill would legislate 10 days of paid sick leave for federally regulated workers and create two new Criminal Code offences for anyone threatening a health-care worker or obstructing access to a health-care facility.

The latter measures are in response to anti-vaccine protests at hospitals and clinics, but they would also apply to facilities where abortions are performed.

The Liberals have long used abortion to drive a political wedge between the Conservatives, with the September federal election campaign being the most recent example.

Campaign Life Coalition, a national anti-abortion organization, has already warned the bill could restrict free speech for those who want to publicly oppose the procedure.

Longtime Ontario backbencher Cheryl Gallant also said in a recent social media video that Trudeau was pushing a "ban on protesting" and questioned "what type of protest will be banned next."

A statement from O'Toole's office Tuesday suggested Conservatives plan to support the legislation, but spokeswoman Josie Sabatino didn't answer when asked whether the vote would be whipped.

She said they support existing Criminal Code measures that protect health workers and "will also support the new measures proposed in (the bill) along with the paid sick leave provisions for all federally regulated industries."

Sabatino also promised a Conservative government would expand the legislation to apply to "other public works and critical infrastructure."

O'Toole has in the past been critical of blockades and protests staged on transportation infrastructure, such as rail lines.