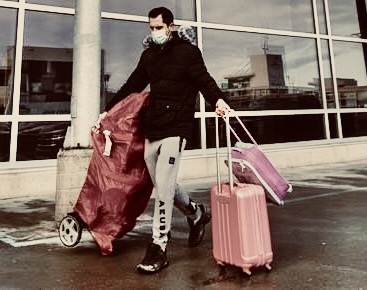 A traveller carrying luggage into the Edmonton International Airport on Thursday, Dec. 2, 2021. Photo by The Canadian Press/Jason Franson
Previous story
Next story

Confusion has been growing at some Canadian airports that say they want more direction from the federal government since it changed COVID-19 testing rules for travellers.

As health officials from around the world warned about the new Omicron variant, Ottawa announced earlier this week that all air passengers entering Canada, except those from the United States, need to be tested upon arrival and isolate until they get their results.

The rule also applies to those who are fully vaccinated against the virus.

But there have been few details on when testing will start.

Giovanni Taboylilson said he was tired and puzzled after arriving Thursday at Edmonton International Airport from Jamaica. He said he was told by airport officials during his layover in Toronto that new rules were kicking in at midnight

He said he was randomly selected for a test in Toronto, was told his results would be available in three days, and was allowed to continue to Edmonton.

"They stamped my passport and let me go through, so that's what made no sense," the 25-year-old DJ said after visiting his family in Jamaica for eight months.

Taboylilson, who is fully vaccinated, said he tested negative in Jamaica before boarding his flight and wasn't told to get tested again or to quarantine once he arrived in Edmonton while waiting for his results.

Toronto's Pearson International Airport was telling travellers on Twitter that it was still waiting for more details on the new requirements.

"This new mandate has not yet been made official by our Federal Government," the airport said on Twitter in response to a person's question about whether her husband would undergo testing and have to isolate after arriving in Canada.

"We are awaiting information as to when and how this will be executed."

In Edmonton, an airport spokesman said staff are in talks with Transport Canada, which is working to bring in testing for all travellers as soon as possible.

"We don't have a set date for when testing will start, but we anticipate it will begin in the next several days," Steve Maybee said in an email.

Lumturige Hijrullahu, who was travelling to Los Angeles from Edmonton, said she was confused because of changing regulations and unclear directions from the government.

"I'm not sure what we have to do when I'm back," said Hijrullahu.

She said she's frustrated because she doesn't know what she will do when she returns in a week.

"If I knew it was going to be like this, (we would not have taken) this trip."

A spokesperson for Calgary International Airport said it has been testing its international travellers since fall 2020.

"We have already started working with all of our partners to scale up operations to meet the new requirements announced on Tuesday," said Krista Ouellette.

"We look forward to more details from federal officials with guidance on some outstanding questions."

The president of the Canadian Airports Council urged the government to work with airports to make sure the measures — "which haven’t been seen in detail" — are brought in.

"The only operationally feasible way to test 100 per cent of international arriving travellers — from all countries except the U.S. — is to provide off-site tests, such as those that travellers can take at their home or other point of self-isolation," Daniel-Robert Gooch suggested.

"We also must ensure there is sufficient testing capacity to implement this across all of the traveller groups that now will be required."

This report by The Canadian Press was first published Dec. 2, 2021.