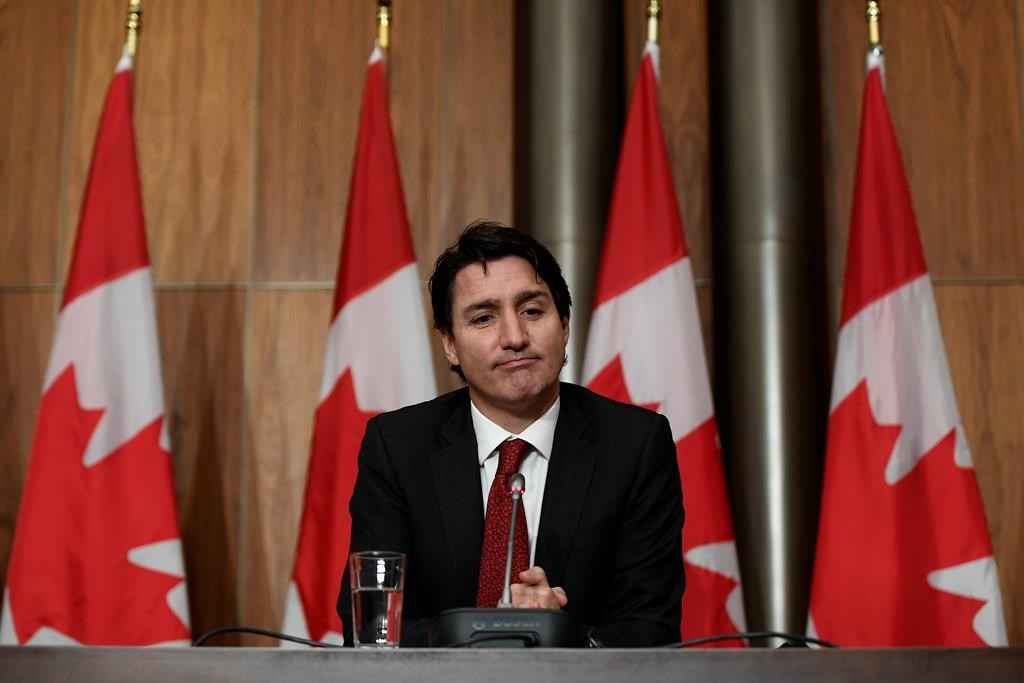 Prime Minister Justin Trudeau listens to questions during an announcement in Ottawa, on Monday, Dec. 13, 2021. Photo by The Canadian Press/Justin Tang
Previous story
Next story

Canada would be willing to "align" its own electric-vehicle incentives with those south of the border if the United States were to ensure Canadian-built cars and trucks would be eligible for President Joe Biden's proposed tax-credit scheme, says Prime Minister Justin Trudeau.

The two countries have been building cars together for more than 50 years, Trudeau noted Monday. That alliance is coming under increasing threat from Biden's controversial proposal to encourage the sale and manufacture of "plug-in electric drive" vehicles that are assembled in the U.S. with union labour.

"We are working very hard with the United States on getting them to understand that this proposed EV rebate for American-built cars only is not good, obviously, for Canada, but also not good for the United States," Trudeau told a news conference.

"There are a number of solutions we've put forward. One of them would be to align our incentives in Canada and in the United States, to make sure that there is no slippage or no unfair advantages on one side or the other. We are happy to do that."

Deputy Prime Minister Chrystia Freeland and Trade Minister Mary Ng warned Congress last week of retaliatory tariffs and other punitive measures if the tax-credit proposal becomes law. In a letter released Friday, Freeland and Ng proposed making Canadian-assembled vehicles and batteries eligible under the U.S. plan, which would be worth up to US$12,500 in tax credits to a would-be car buyer.

Trudeau's comments, however, suggest Canada could offer a comparable package that would apply to vehicles assembled in either country.

The letter Friday was addressed to key members of the U.S. Senate, which is expected in the coming weeks to vote on the Biden administration's $1.75-trillion climate and social-spending package, which includes the new EV tax credits.

It doesn't appear, however, that Canada's lobbying efforts have changed any minds at the White House.

"The president advocated for these tax credits because he wants to make it more affordable for the American people to purchase electric vehicles, and because he feels it's … a huge opportunity for American automakers," press secretary Jen Psaki said Monday when asked about the letter.

Biden and Trudeau discussed the proposal at length when the two met last month in the Oval Office, she acknowledged, before suggesting little has changed since then.

"We have a good working relationship with the Canadians. We had a good conversation about it, but I don't have any additional policy I would expect or changes to that," Psaki said.

The federal government is already planning to retool its existing rebate program, which currently only applies to new zero-emission vehicles with a maximum base price of between $45,000 and $55,000. The Liberals promised during the election campaign to spend $1.5 billion over the next four years on expanding the program in an effort to get more electric vehicles on the road.

The U.S. proposal amounts to a 34 per cent tariff on electric vehicles assembled in Canada and violates the terms of the U.S.-Mexico-Canada Agreement, or USMCA, Freeland and Ng wrote — not to mention the affront it represents in a country that's been a U.S. partner in building cars and trucks for half a century.

"We want to be clear that if there is no satisfactory resolution to this matter, Canada will defend its national interests, as we did when we were faced with unjustified tariffs on Canadian steel and aluminum," the letter reads.

It promised a forthcoming list of U.S. products Canada is prepared to target with tariffs, both within the auto sector and beyond.

Senate Majority Leader Chuck Schumer wants a vote on the legislation, which was already approved by the Democrat-controlled House of Representatives, before Christmas. Few see the timeline as realistic, especially after new economic data Friday pegged the inflation rate at 6.8 per cent.

Biden was scheduled to speak by phone later Monday with West Virginia Sen. Joe Manchin, a moderate Democrat who has misgivings about the bill, including the tax-credit proposal. The White House sees Manchin's vote as a must-have in a Senate evenly divided between Democrats and Republicans.

Psaki advised against viewing the discussion as a negotiation, but rather "a conversation between two people who have been in public life for some time and have had good-faith discussions directly. This is just a continuation of that."

Vehicles built in Canada comprise about 50 per cent U.S. content, said the letter, with more than $22-billion worth of American auto parts being imported by Canadian manufacturers every year.

"To be clear, we do not wish to go down a path of confrontation," it reads. "That has not been the history of the relationship between our two countries — nor should it be the future."

The letter also threatens to hit the pause button on certain concessions Canada has already made to U.S. dairy producers under USMCA, arguing that the EV tax credits would comprise "a significant change in the balance of concessions" agreed to under the deal.