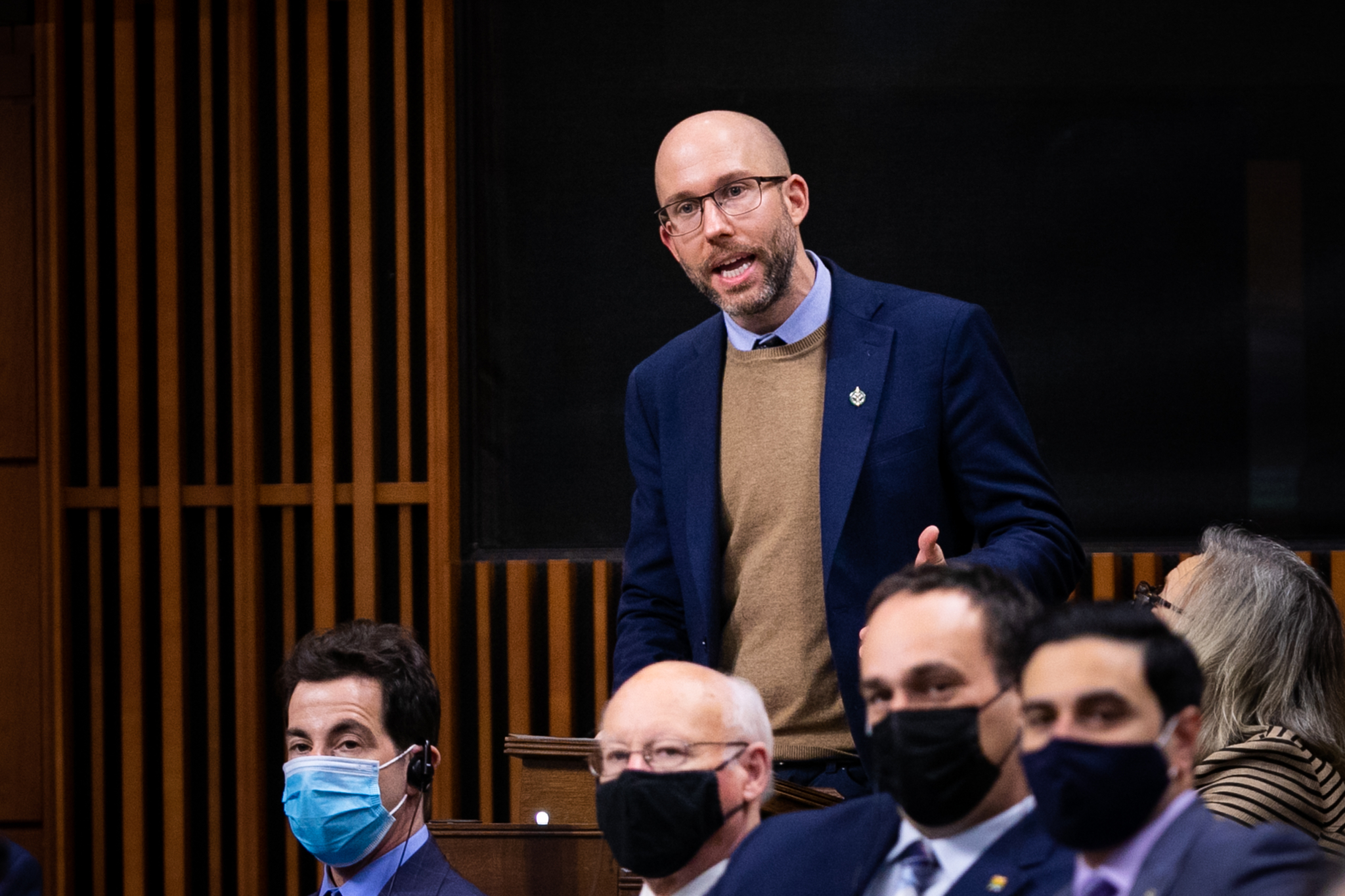 Canada’s richest families hold nearly 25 per cent of the country’s wealth while the bottom 40 per cent of Canadians own just over one per cent, according to a new report from the Parliamentary Budget Office (PBO) released Thursday.

“A bad situation is only getting worse and it doesn't have to be this way,” said Green MP Mike Morrice in an emailed statement to Canada’s National Observer.

“At a time when so many Canadians are on the brink of financial insolvency, the top one per cent hold a quarter of the country's wealth.”

The report studied the trends in wealth held by the richest families in Canada from 1999 to 2019 and found the top one per cent’s share of wealth increased by about five percentage points during that time.

The findings are not surprising, says D.T. Cochrane, a policy researcher with Canadians for Tax Fairness (C4TF), a non-profit and non-partisan organization that advocates for fair and progressive tax policies.

“It shows the need for a long-overdue wealth tax,” said Cochrane.

For many Canadians across the political spectrum, a wealth tax is a welcome idea.

An Abacus Data poll from July found 89 per cent of Canadians want to see a wealth tax of one per cent paid by the wealthiest Canadians as part of the country’s economic recovery from the pandemic.

The poll, commissioned by the Broadbent Institute and the Professional Institute of the Public Service of Canada was based on the NDP’s proposed one per cent tax on wealth over $20 million from the party’s election platform.

One per cent of families hold nearly 25 per cent of the total wealth and the bottom 40 per cent of Canadians only own 1.1 per cent, according to a new report from the @PBO_DPB. This reaffirms calls for a wealth tax, says @FairTaxCanada.

The NDP’s 2021 platform also included a pledge to increase the capital gains tax from 50 per cent to 75 per cent. This would raise an estimated $44.7 billion over the next five years, according to the PBO.

Right now, only half of capital gains are taxed but all income from labour is available to be taxed, said Cochrane.

“This is just an egregious worsening of inequality,” he said. “If capital gains were taxed at the very least in the same way as labour incomes were taxed, that would be an important step towards constraining and possibly reversing this worsening inequality.”

“We are committed to ensuring that everyone pays their fair share of tax so we continue to have the resources needed to invest in people and to help our economy recover from the COVID-19 pandemic,” reads a statement from Freeland’s press secretary Adrienne Vaupshas.

“That is why in Budget 2021 and the 2020 Fall Economic Statement we committed to implementing a tax on multinational digital giants; introducing a luxury tax; limiting stock option deductions in the largest companies; and implementing a tax on the unproductive use of housing that is owned by non-resident, non-Canadians.”

The PBO report also points to a need for greater data gathering and analysis of wealth distribution, Cochrane said.

In this report, all types of wealth are added together, but we don’t know what assets make up the wealth portfolios of the top one per cent of families, he said. For most Canadians, houses are the largest assets they hold, which is very different from owning “hundreds of millions of dollars in corporate debt and equity,” he adds.

“We need more detail about what the asset mix is because that will add more information to the political and economic power that's associated with this wealth,” said Cochrane.

More than half of Canadians surveyed in the July Abacus Data poll think the pandemic has worsened inequality, and it’s clear many Canadians — regardless of party affiliation — want to see the wealthiest Canadians taxed.

Morrice hopes the PBO report will prompt those in power to consider policies like a wealth tax and guaranteed livable income.

NDP deputy finance critic Peter Julian did not respond to requests for comment by deadline.

Left to itself, capitalism

Left to itself, capitalism will tend to concentrate wealth and ownership. That's what we are to understand, and that needs to be mitigated against. But some part of the problem isn't capitalism per se, but politics and a tax code which gives favourable treatment to wealth. Why should capital gains income be taxed differently from labour income? The argument made is that the economy benefits from keeping capital working, out there in the private hands of investors. I am not enough of an economist to know to what extent this is true, but it may be one of those cases where we don't like it but we need it as part of a healthy capitalist ecosystem.

But a lower hanging fruit for reform is the capital gains from the appreciation in housing prices. This does not function as an incentive to productivity. The owners benefit for doing nothing but waiting for the rising prices all around them (often a function of public investments) to lift them up. The profits are not just taxed favourably, they are not taxed at all! Many sellers are making millions in tax-free income. This isn't capitalism. This is corruption by the rich of yesteryears who got into politics and wrote themselves an arbitrary self-dealing tax code.

The thing is that capitalism

The thing is that capitalism per se and the politics are inevitably intertwined. A society with a capitalist economy will be oriented towards money and markets, will be a society where money can buy almost anything and is considered the main yardstick of success. People with a lot of money thus can buy a lot of power, and buying power makes you more money.
So in any capitalist society, wealthy capitalists will buy influence, will buy political outcomes that are to their benefit. But that works better if you have a rationale. So, with much lobbying and many campaign contributions you buy reduced taxation of capital gains . . . but you also buy some economists and publicists to give oh-so-credible reasons why that's a Good Thing. If you're Jeff Bezos maybe you also buy the Washington Post, to make sure it doesn't say the wrong things to the public.

I'm just saying--there IS no capitalism "per se", the regulatory environment in which capitalism works is politics from the ground up, whether it's laws against fraud or the rules governing banking or laws stopping agricultural workers from striking or "investor-state-dispute-settlement" mechanisms letting foreign companies sue any time any government policy reduces their anticipated profits. And the capitalists themselves were political actors since before capitalism was the main way the economy was run.

As to the specific economic argument for lower capital gains taxes, in my opinion it is largely bogus. This is not a society in which capital for investment is rare and hard to come by. If there is a profitable investment opportunity, the investment can happen. If anything, the very wealthy are ending up using a lot of their money in useless speculation schemes, because they have more than they can find productive, profitable investments for. Meanwhile, what causes investments to be profitable? Basically, if there is effective demand for the product the investment will cause to be produced. What does effective demand mean? People who want the product AND HAVE THE MONEY TO PAY FOR IT. So investment will happen if the public has money to spend on products. It also happens that the poor and middle class spend nearly all their money on products, but the rich do not--they invest a bunch of it, because they can only consume so much. Soooo, the implication is that if you want investment to happen, you do not give more money to rich investors because they already have plenty of money to invest, one way or another. You give more money to, or reduce taxes on, the poor and middle class, so their purchasing power will create OPPORTUNITIES for profitable investment. And in the real world, this seems to be the case--the evidence does not show any increase in investment over the last many years as the wealthy and corporations have seen vastly reduced taxation.

While this sounds super at

While this sounds super at first glance, implementation will determine whether it leads governments to
- pay down debt
OR
- continue to buy votes with grandchildren’s taxes & poverty
(and let the next government deal with problems of present profligacy).