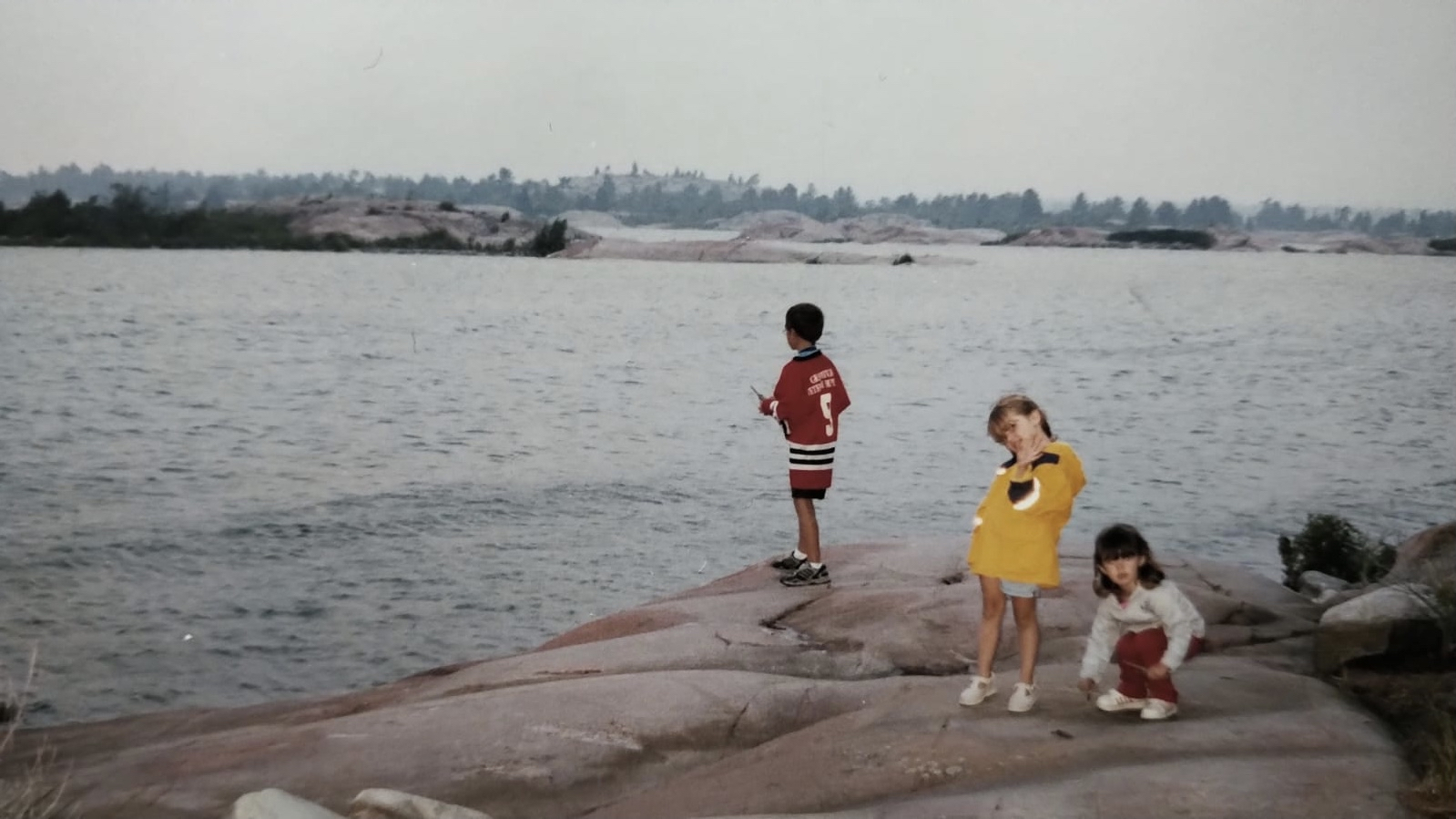 A young Ashley Stefureak (centre) with her brother and cousin in Wiikwemkoong. As an adult, Stefureak has "a new understanding and respect for the species I encounter." Photo credit: Barry Stefureak
Previous story

The leopard frogs call out to each other, signalling their location to my cousins and me. Carefully tip-toeing around the philonotis marchica moss, being careful not to startle the frogs from their hiding spots or create waves to disturb the smallmouth bass fry that have found shelter under the petals of the white water lilies, I begin to recognize that we exist on a living, breathing organism, not just a dead rock floating in an abyss.

Taking the lessons I learned in Wiikwemkoong as a child and applying them to my everyday life as an adult has changed my perspective and has allowed me to view the world in a different light.

Now living in a city, I am still able to relish in what our environment has to offer. Taking my daily afternoon walk, I can look up at my neighbour's yellow birch tree in awe as the leaves dance in the wind and seemingly twinkle in the sunlight. I am able to close my eyes and have a mental conversation with the leaves as they rustle back in response, the two of us acknowledging each other's presence.

Interacting with the marshes in Wiikwemkoong, on a random island in a sea of islands in Georgian Bay, I recognized the intricacies of our environment and how each species plays a vital role in their ecosystem. Anishinaabe culture uses the Seven Grandfather Teachings as guiding principles for how we should treat our community and our environment, including humility, generosity, and respect. We need to shift from the colonial mindset of “how can this be used or sold” and allow our environment to recover and flourish alongside us.

Botanist and Potawatomi Nation member Robin Wall Kimmerer raises the notion of how the world, just like us, is alive and holds a spirit. Kimmerer refrains from using the word “it” when referring to other species because it removes meaning from the being and allows us to see them as an inanimate object, rather than a living being.

“They’ve been on the Earth far longer than we have been, and have had time to figure things out. They live both above and below ground, joining Skyworld to the Earth. Plants know how to make food and medicine from light and water, and then they give it away,” Kimmerer says in her book, Braiding Sweetgrass.

In order to respect and connect with the world we live in, Kimmerer emphasizes we are a single citizen of the democracy of species.

We need to increase public desire to learn more about the land around us, as more people would be able to sympathize with the flora and fauna at risk from the ongoing climate crisis and environmental catastrophes if they paid more attention. It is much easier to relate with an individual — and leopard frogs, water lilies and the Earth are individuals — when you know who they are.

This notion can begin with the acknowledgment of varying plant and animal species, understanding that each and every plant and animal plays a role within its ecosystem, continuing the circle of interconnectedness.

Opinion: "We need to increase public desire to learn more about the land around us, as more people would be able to sympathize with the flora and fauna at risk from the ongoing climate crisis and environmental catastrophes, writes @AStefureak.

There is a new understanding and respect for the species I encounter in my everyday life, as I know their names, or acknowledge that they have a name. Along with a name, I acknowledge these species play different roles, supporting their environment and other species. The yellow birch tree I encounter each afternoon is the home to countless different species, from mammals and birds to insects and mosses.

The yellow birch plays its role providing those species with food and shelter, and still provides us with oxygen and helps regulate temperatures. The yellow birch is not “just a tree,” but a life filled with generosity, and is a life that will be around 150 years beyond my own.

Traditional Indigenous teachings demonstrate that you must respect the land and all that it has to offer, only sourcing what is needed when it is needed, treating the land with love, respect, and generosity. If we all shifted our perspective and started treating other species as the living beings that they are and only taking what is needed, we would not only help recover our environment but learn more about the species around us.

Planting the seeds for healing and reconciliation

Why Indigenous Guardians are key to Canada's climate future

Thank you for this and I

Thank you for this and I totally agree. If we truly became acquainted with all the other living beings in our neighbourhoods, we might become less anthropocentric and realize our utter dependence on the natural world. I have heard that some African tribes put plants (not humans) at the top of the biological hierarchy. This makes a lot of sense to me. As the author states, plants are the producers of food and medicine.