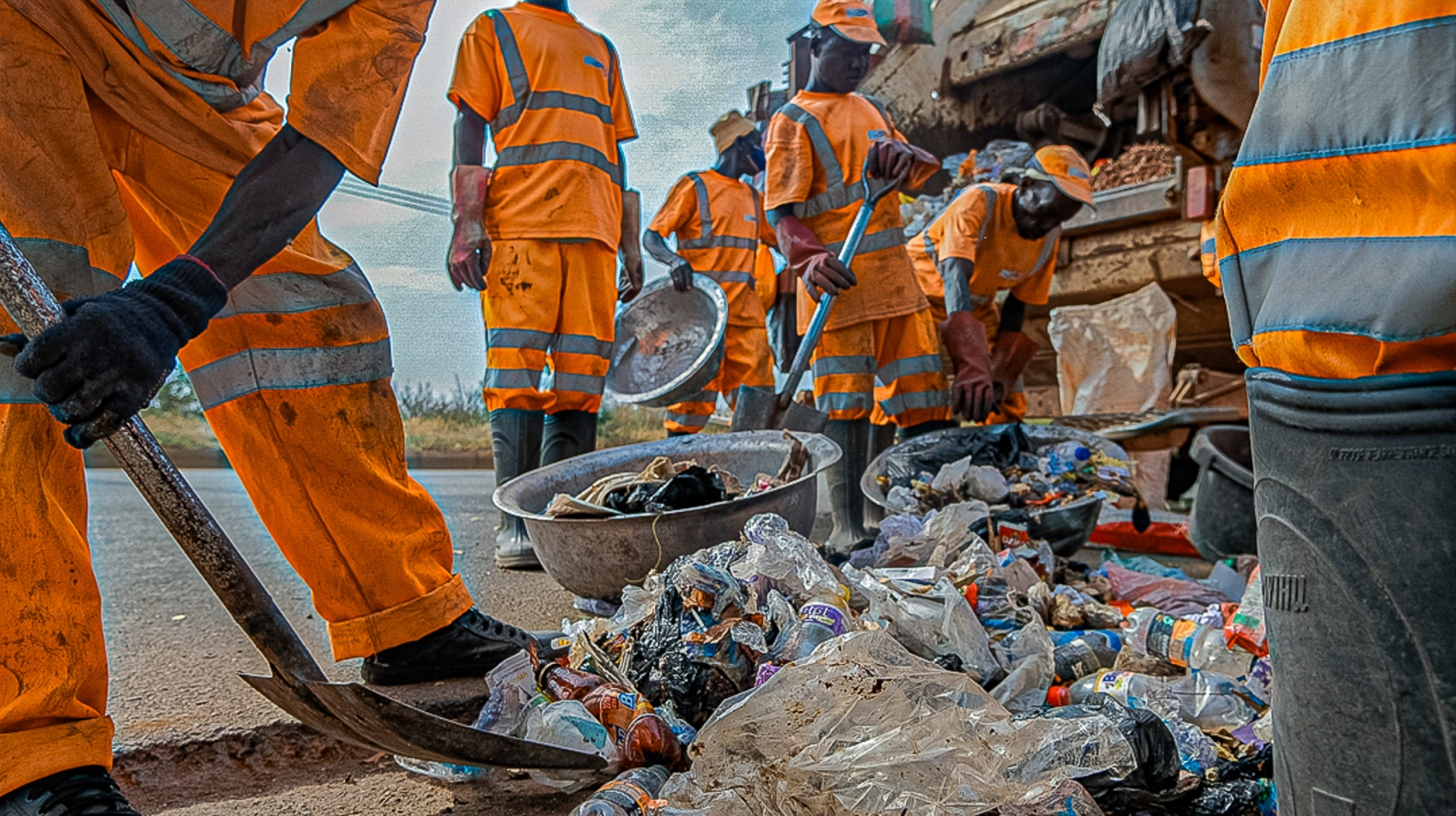 Workers pack waste to be dumped at a larger landfill far from the community in Kwara, Nigeria. Photo by Francis Ogunyemi / Climate Visuals Countdown
Previous story

Microbes in oceans and soils across the globe are evolving to eat plastic, according to a study.

The research scanned more than 200 million genes found in DNA samples taken from the environment and found 30,000 different enzymes that could degrade 10 different types of plastic.

The study is the first large-scale global assessment of the plastic-degrading potential of bacteria and found that one in four of the organisms analyzed carried a suitable enzyme. The researchers found that the number and type of enzymes they discovered matched the amount and type of plastic pollution in different locations.

The results “provide evidence of a measurable effect of plastic pollution on the global microbial ecology,” the scientists said.

Millions of tonnes of plastic are dumped in the environment every year, and the pollution now pervades the planet, from the summit of Mount Everest to the deepest oceans. Reducing the amount of plastic used is vital, as is the proper collection and treatment of waste.

But many plastics are currently hard to degrade and recycle. Using enzymes to rapidly break down plastics into their building blocks would enable new products to be made from old ones, cutting the need for virgin plastic production. The new research provides many new enzymes to be investigated and adapted for industrial use.

“We found multiple lines of evidence supporting the fact that the global microbiome’s plastic-degrading potential correlates strongly with measurements of environmental plastic pollution — a significant demonstration of how the environment is responding to the pressures we are placing on it,” said Prof. Aleksej Zelezniak of Chalmers University of Technology in Sweden.

Jan Zrimec, also at Chalmers, said: “We did not expect to find such a large number of enzymes across so many different microbes and environmental habitats. This is a surprising discovery that really illustrates the scale of the issue.”

The explosion of plastic production in the past 70 years, from two million tonnes to 380 million tonnes a year, had given microbes time to evolve to deal with plastic, the researchers said. The study, published in the journal Microbial Ecology, started by compiling a dataset of 95 microbial enzymes already known to degrade plastic, often found in bacteria in rubbish dumps and similar places rife with plastic.

A new study is the first large-scale global assessment of the plastic-degrading potential of bacteria and found that one in four of the organisms analyzed carried a suitable enzyme. #Plastic #Pollution #ClimateCrisis #Microbes

The team then looked for similar enzymes in environmental DNA samples taken by other researchers from 236 different locations around the world. Importantly, the researchers ruled out potential false positives by comparing the enzymes initially identified with enzymes from the human gut, which is not known to have any plastic-degrading enzymes.

About 12,000 of the new enzymes were found in ocean samples, taken at 67 locations and at three different depths. The results showed consistently higher levels of degrading enzymes at deeper levels, matching the higher levels of plastic pollution known to exist at lower depths.

The soil samples were taken from 169 locations in 38 countries and 11 different habitats and contained 18,000 plastic-degrading enzymes. Soils are known to contain more plastics with phthalate additives than the oceans and the researchers found more enzymes that attack these chemicals in the land samples.

Nearly 60 per cent of the new enzymes did not fit into any known enzyme classes, the scientists said, suggesting these molecules degrade plastics in ways that were previously unknown.

“The next step would be to test the most promising enzyme candidates in the lab to closely investigate their properties and the rate of plastic degradation they can achieve,” said Zelezniak. “From there you could engineer microbial communities with targeted degrading functions for specific polymer types.”

The first bug that eats plastic was discovered in a Japanese waste dump in 2016. Scientists then tweaked it in 2018 to try to learn more about how it evolved, but inadvertently created an enzyme that was even better at breaking down plastic bottles. Further tweaks in 2020 increased the speed of degradation sixfold.

Another mutant enzyme was created in 2020 by the company Carbios that breaks down plastic bottles for recycling in hours. German scientists have also discovered a bacterium that feeds on the toxic plastic polyurethane, which is usually dumped in landfills.

Last week, scientists revealed that the levels of microplastics known to be eaten by people via their food caused damage to human cells in the laboratory.

Awesome news. So much for

Awesome news. So much for plastic polluting the world perpetually--the bugs are gonna eat it. I can see implications for plastics still in use--as the bacteria and fungi get better at munching plastic, plastic things will become much higher maintenance, making its use less attractive in the first place.

One can speculate that a race

One can speculate that a race will develop between the Chemist and bacteria and fungi. New plastics vs their destroyers. New jobs galore!

I've been around long enough

I've been around long enough to question how safe the breakdown products, and indeed, the microbes themselves, will prove to be for people and other components of local ecologies.
It seems we learn nothing.
I can't tell you how many people I know are proud of their organic gardens, and of consuming only organically grown produce, yet promote by their lifestyles all manner of harmful consumption.
We are an ignorant population, and an irresponsible species.
I learned today of something called "smash cakes", a trend apparently amongst people who've never known want, to provide babies with a birthday cake to be placed in front of a child to destroy with bare hands.
Talk about teaching kids excessive consumption and wastefulness. The people promoting this in their own young are the grandchildren and great-grandchildren of people whose own parents grew up during the Great Depression, the kids who were told to finish what was on their plate, with the admonition to think about the poor starving kids in China -- the name of the country referenced has, of course, changed over time to Pakistan, Africa, Lebanon, Syria, etc.
What in the name of everything good is the world coming to.
I'm not a cynic. I've just lived long enough to not embrace everything that comes and goes around.

Joy. (not). Degraded to what extent, and into what? Different toxins?
Oil-slick eating microbes were lab-invented after I believe it was Exxon-Valdez, way back when life forms could not be patented, and when humans owned their own genes.
"The people" lost that one when there was money to be made using genetic capacity of a man in the US, I seem to recall it was in the Pacific Northwest. The man was indigent, and there was no non-profit to champion his objection.
Somewhere on my bookshelf I have the details, unless I loaned the book and it wasn't returned.
That was back in the 80s or 90s, when probably most of the people who'd care about such issues weren't born yet.
It's had huge implications for many fields of endeavour, and is in large part responsible for patenting of plants that used to be common and can't be found any more for love or money.
That applies hugely to the pharmaceutical industry as well.