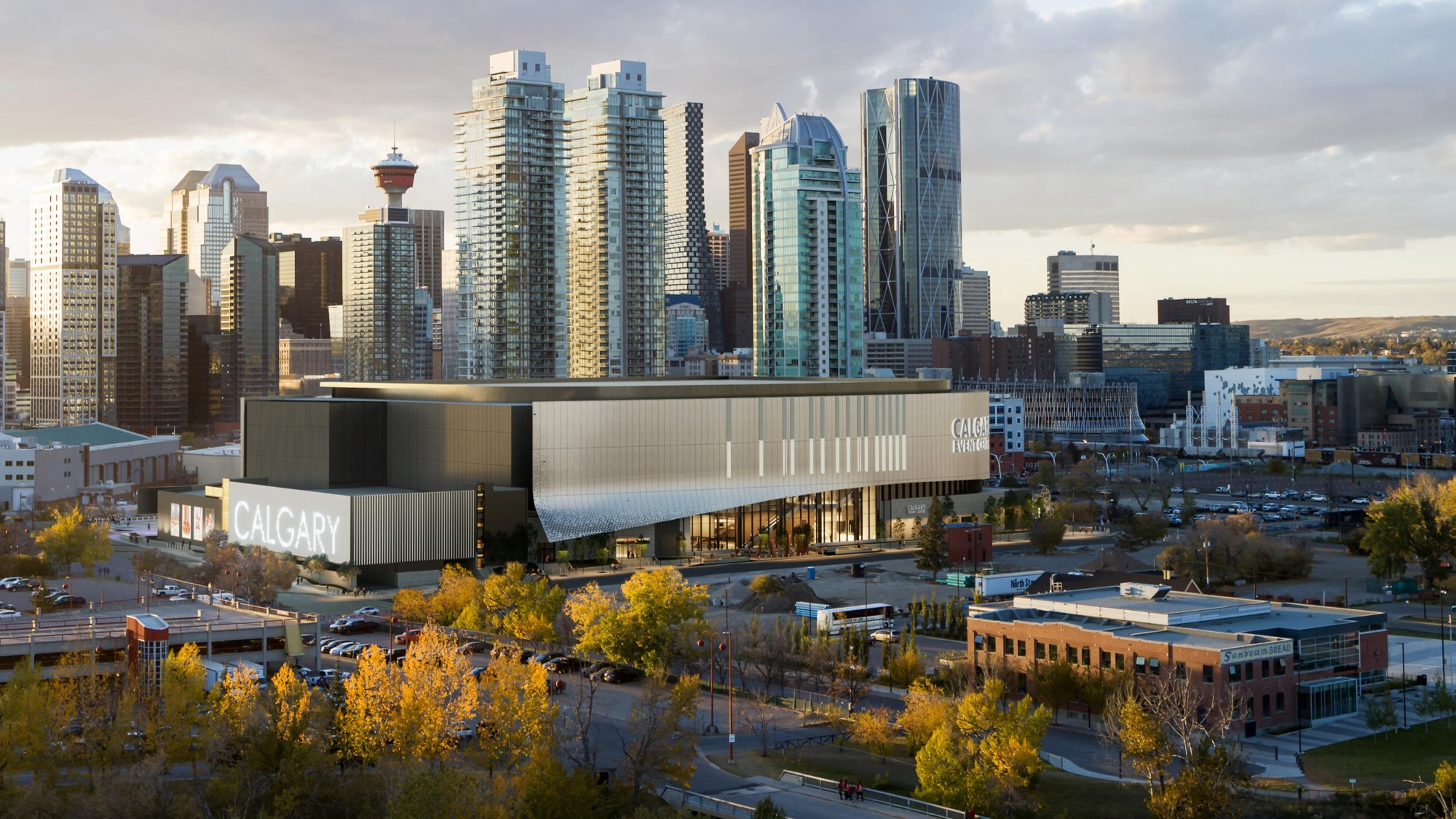 If the Flames ownership group still thinks paying for the climate mitigation measures on their new arena is an expense they can’t afford, they’re about to find out what that really costs, writes columnist Max Fawcett. Photo via City of Calgary website
Previous story
Next story

It’s not often you lose a big hand of poker and get the opportunity to play it over again. But that’s the early Christmas gift that Calgary Sports and Entertainment Corporation, the owners of the Calgary Flames, have unwittingly given to city taxpayers and Calgary’s new mayor and council.

After the team’s billionaire owners agreed to split the cost of a proposed new arena with the city, it appears they tried to bluff the new council for even better terms — and even more public money.

This time, though, it didn’t work. As Mayor Jyoti Gondek explained in a tweet thread Tuesday, new costs have arisen in recent months relating to climate mitigation ($4 million) and road/sidewalk right-of-way issues ($12.1 million). The city was willing to help cover $6.4 million worth of the latter, a generous offer given the Flames ownership group had already renegotiated the terms of the deal in its favour earlier this year. But apparently, that wasn’t good enough.

It’s not like Murray Edwards, the primary shareholder of the CSEC, is hard up for cash right now. His shares in CNRL, the oil and gas company he founded, are up a cool 26 per cent since July 31, when the agreement between the city and CSEC was last updated. As the holder of 21.9 million shares, that means his personal net worth has increased by approximately $236 million — and that’s without including his 1.975 million outstanding options or 856,625 performance share units.

Edwards could even pay for the cost of climate mitigation for his team’s new arena through his position in a completely different oil company. In late 2020, he invested $15.6 million in debt and equity in Cardinal Energy, a smaller firm that was on the verge of bankruptcy at the time. After buying 6.25 million shares at $0.50 each (and receiving 6.25 million warrants, which give him the right to buy the shares at $0.55 each), he now controls as many as 23.5 million shares that are worth far more today than a year earlier. With Cardinal’s stock now trading above $4, he’s already made upwards of $75 million on his position — and $40 million on the stock portion of the deal alone.

If there’s anyone who should be willing to cover the cost of climate mitigation on a new arena, it ought to be Edwards. In addition to building CNRL into a major global player, he also co-founded FirstEnergy Capital, one of the oil and gas sector’s biggest financiers, in the early 1990s alongside Brett Wilson, Jim Davidson and Rick Grafton.

But even if you set that aside, there’s the fact that climate mitigation isn’t a theoretical risk for the Calgary Flames or its fans, who watched the Saddledome get flooded up to the cheap seats back in 2013. For him to balk at the modest costs of preparing a new arena for potential climate risks isn’t just a bad look — it’s an epically bad read of the room.

That might be because Edwards doesn’t spend much time in the room anymore. As CNRL’s 2020 filings revealed, he now lives in St. Moritz, Switzerland — a move some have speculated is for tax purposes. He first left Canada in 2016, just as federal and provincial income taxes were set to rise, although he insisted that wasn’t the driving force behind his initial relocation to London. But wherever Mr. Edwards cares to hang his hat these days, it should be abundantly clear by now it won’t be Calgary.

In the days and weeks to come, Flames ownership and their proxies in the media will almost surely invoke the spectre of relocating the franchise, whether it’s to Quebec City, Houston or some other market. Let them make their threats. They’ve already had their bluff called once by Calgary’s new mayor and council, and their remaining cards aren't nearly as good as they would like to pretend.

Opinion: After the team’s billionaire owners agreed to split the cost of a proposed new arena with the city, it appears they tried to bluff the new council for even better terms — and even more public money, writes columnist @maxfawcett. #Calgary

The NHL isn’t in a position to remove a team from a major Canadian market like Calgary — especially now that it has placed ones in Las Vegas and Seattle — and the public’s appetite for subsidizing billionaires and their sports teams is smaller than it's ever been.

Gondek, meanwhile, has made it clear that tackling climate change is going to be a big part of her administration’s agenda, no matter how loudly her fossil-fuelled opponents complain about it.

If the Flames ownership group still thinks paying for the climate mitigation measures on their new arena is an expense they can’t afford, they’re about to find out what that really costs.

I'm sure that taxes are a

I'm sure that taxes are a part of why Murray Edwards relocated to Switzerland but I don't think he looks at Calgary as fondly since k.d. Lang stole his wife.

Really? Ha. Now THAT's rich.
The entitlement of these guys, and they're always guys, is what's epic here. They don't have to worry about "reading the room" either because they own it.
The fact that guys like this have been trying to undermine Naheed Nenshi for years, and did the same with Jyoti Gondek who won anyway, as did Nenshi, actually gives me some hope for this province. The fact that she's a woman makes it even sweeter.
And these monsters are always conservatives, so that particular old boys' club is finally starting to actually lose real ground. Again, richly deserved.

Absolutely correct Tim. The problem is that there are too many people foolishly believe that unless you give in to the owners' demands that their city won't survive.

We're behind our mayor all

We're behind our mayor all the way.....relieved that city voters actually replaced a great mayor with someone who looks just as good. And maybe even better.

Covid and climate disasters are telling us, loud and clear, that we can't afford these back room, out of the country, billionaires and trillionaires any more. Many of us have little interest in big league competitive sports; many others can only afford to watch on the telly.

Let the corporate sector shell out from their climate destroying wealth...if a season's tickets that most Calgarians can't afford is part of the 'perks' they plan to offer their employees. I want my tax dollars going to education, health, and plans for affordable housing.

Can't wait to see what our new council has in mind to get the rising tide of homeless off the streets. But these 'owners' of our elite athletes??? Tax the SOB's.

Damn right, and their

Damn right, and their sneering contempt for solar panels struck me as a dog whistle to those of their ilk; that was just too much....

Bravo to Mayor Gondek! Her

Bravo to Mayor Gondek! Her leadership and that of Naheed Nenshi before her are indicative of the "creeping liberalism" manifesting itself in Calgary over the last decade or so. Most people would call that just openly representing the people's interests.

Conservatives like Jason Kenney often refer to city democracy as "urban elitism." But when you really look at it, there is nothing as remotely powerful as the truly elitist monied class (and their provincial and media sock puppets) running Alberta's sacred triumvirate of oil, suburban real estate and Big Sports putting enormous pressure on municipal governments to let them have their way, whether in the form of zoning for annexing farmland for sprawling 5,000-hectare -low density car / oil dependent subdivisions or cathedrals to the gods of sports.

Here's a thought. Why shouldn't the newly re-elected federal government strike a strong agreement in 2022 to directly help cities fight climate change and build adaptation measures to a degree never seen before? The Trudeau government could build Calgary's post-pandemic Green Line with or without the help of the provincial UCP. Kenney would dare criticize or reject billions in federal project and job creation funds at his own risk and embarrassment, though technically he has control over cities under the Constitution. In fact, the pressure on the province -- any province, for that matter -- to willingly get on board would dovetail with the recent wide scale awakenings within the population of the power of climate-related extreme weather events and the deepening urgency to do something about it.

I've believed cities and local organizations have been light years ahead of senior governments for years now in planning for the future. But they have been shackled by the fact that 92% of the total tax revenue earned within their boundaries is grabbed by the upper levels. It would be remarkable if the feds not only caught up with the citizenry, but exceeded their expectations while dragging some provincial governments into the 21st Century and forcing them to open their eyes to the fact that cities are the real economic engines of the nation and it is they who hold many of the solutions to mitigating climate change.