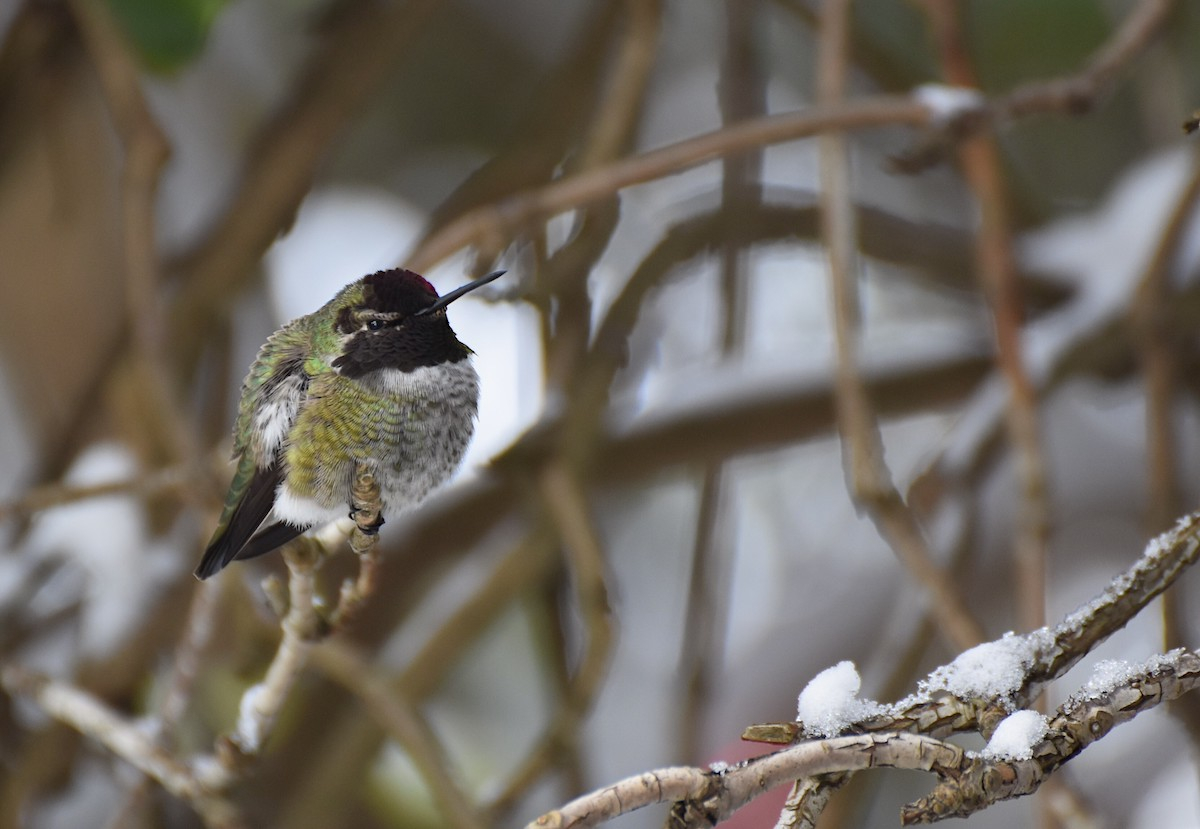 This morning, my 79-year-old dad was out in the winter dark shovelling a path through a half foot of fresh snow to ensure his hummingbird feeders were full of fresh, sugary liquid by dawn’s first light.

And it wasn’t the first time.

He’s one of a legion of residents across southwestern B.C. and Vancouver Island on a crusade to ensure resident Anna’s hummingbirds don’t perish in the unusually cold weather gripping the region the past few weeks.

People are flocking to hardware stores to hunt for specialized warming bulbs and feeders. My father can attest from personal experience there are none to be found at stores near him.

And the internet is awash with social media posts from people trading advice, tactics and photos of the contraptions they’ve rigged up to keep the feisty little birds fed and warm.

Some are tucking lit non-LED lightbulbs in aluminum baking pans taped to the bottom of feeders to keep the nectar from freezing. Others are encasing feeders in socks stuffed with hand-warmer heat packs. Incandescent Christmas lights wrapped around the devices are a big hit, too.

So important to take care of those #hummingbirds in the cold. So far, my homemade wool feeder-cozy with bubble wrap insulation and 2 hand warmers is doing the trick, all contained in the custom wood swing! We're ready with a heat lamp if it gets any colder. pic.twitter.com/RY5Os0xDQj

My dad’s method involves preparing a bulk batch of fresh sugar water each night and bringing in the feeders for defrosting and cleaning.

Each morning, at least a half-hour before sunrise, he ensures the feeders — swaddled with every washcloth in the house — are dangling on their hooks in the birds’ favourite haunts beside the camellia bush and beneath the grape arbour.

Then, every couple of hours for the rest of the day, he braves the cold to substitute the old feeders with warm reserve ones. This from a man who fled to B.C. to escape Ontario winters as a young man.

The internet is awash with social media posts from people trading advice, tactics and photos of the contraptions they’ve rigged up to keep Anna's hummingbirds fed and warm during the B.C. cold snap. #hummingbirds #BCstorm #AnimalRescue

I’m not sure I can swear my sister and I ever got that level of care and feeding.

Apparently, my father’s devotion to B.C.’s hardiest hummingbird species is not unusual.

MARS Wildlife Rescue Centre in the Comox Valley on Vancouver Island is fielding a rash of calls from people looking to help or save their tiny charges.

“People are really, really being wonderful trying to save these birds,” said Jo Stiles, a MARS animal caregiver.

“They are being really attentive with their feeders so hummingbirds can make it through this cold. But it requires a tremendous effort.”

The birds, which weigh less than five grams, need to constantly eat to maintain their body weight and energy, she said.

To survive the cold, hummingbirds often go into torpor, a hibernation-like state where their body temperature may drop from 107 F to as low as 48 F.

People may think the birds are dead in this state, as they can be found hanging from a perch or immobile on the ground.

The best remedy is to put the hummingbird and a feeder in a covered box indoors and somewhere quiet until they warm up, Stiles said.

“Let them have some time in there, and when you see them back to being active, then they can be released,” she said.

“Unless it’s late in the day, then keep them overnight with a feeder and let them go the next morning.”

Birds that don’t seem to revive within half an hour indoors should be taken to a local rescue where they can get more specialized care, she said.

“That may be an indication that it's gotten very dehydrated or so hypoglycemic that it can't reactivate its own system and so it may need some additional help,” Stiles said.

PSA: Do not, under any circumstances, bury a “dead” hummingbird during the cold snap. Bring them in and gently warm them up. They enter a hibernation-like state of torpor in extreme cold, so “dead” doesn’t always mean dead https://t.co/lDa326LxOh

The best thing people can do for the jewelled birds during winter is to make sure they have lots of warm, clean food.

Anna’s hummingbirds are notoriously territorial about their feeders.

My father has given an unmentionable nickname to one pugnacious male that sits on the line across the patio equidistant from both feeders so he can easily chase off interlopers.

The bold little birds also aren’t particularly gracious to their caregivers, either.

They wait on my father each morning. The moment he cracks open the door, the iridescent green and scarlet-throated aerialists are zooming and chattering about his head as if to hurry him up.

But if you start feeding hummingbirds, you have to commit because they become reliant on that food source, says the SPCA.

And my father is nothing but committed.

He’d never admit it, but he’s forgoing a short trip to a friend’s for New Year’s citing poor weather.

But I suspect the real reason is he doesn’t trust my mother to coddle his beloved hummingbirds carefully enough.

You don't need a heat source.

You don't need a heat source. I just wrap a couple of layers of insulation around the glass part of the feeder using woollen mitts and a woollen headband then I cover it with a couple layers of tin foil. It all gets secured with elastic bands. Works like a charm. I have four individuals who use my feeder.