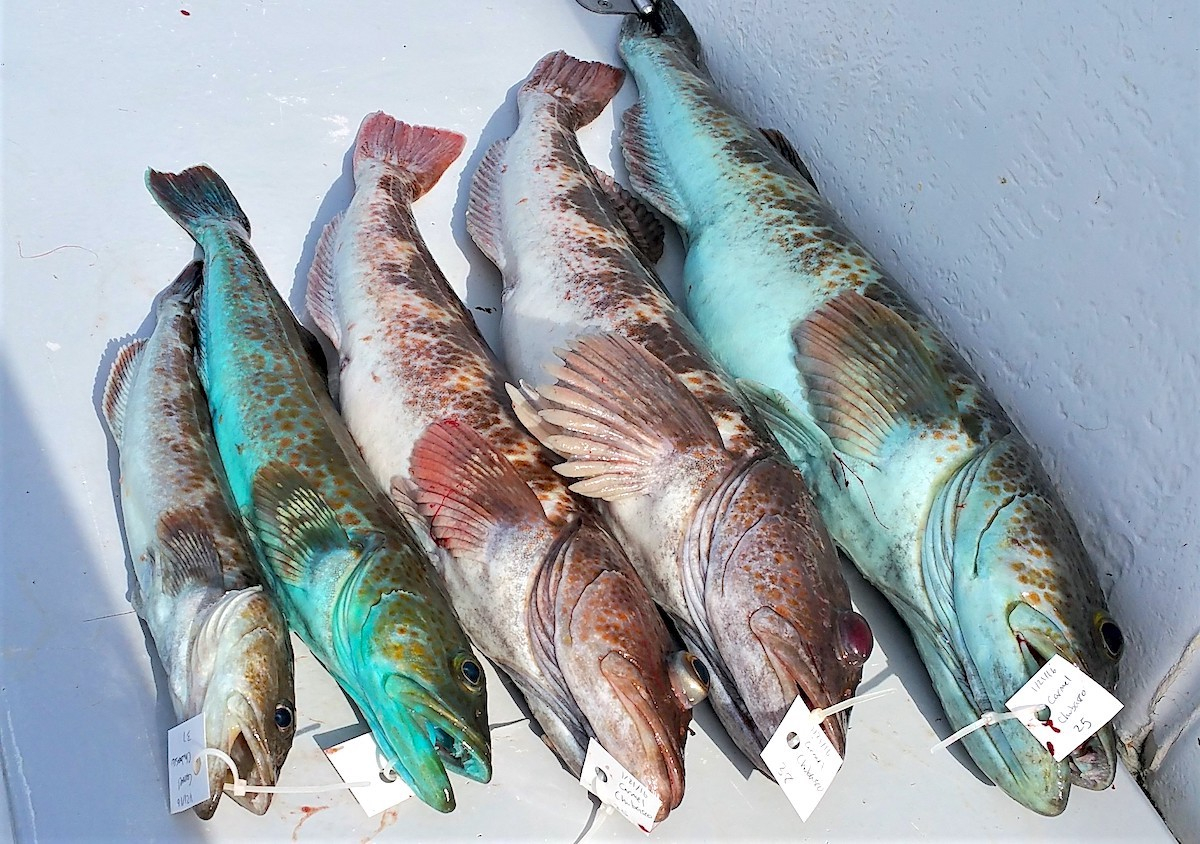 A new study has revealed a few secrets around why some ling cod are an electric blue. Photo by Laurel Lam
Previous story
Next story

Five years ago, marine ecologist Aaron Galloway surfaced with a ling cod he had spearfished off the coast of Oregon and proceeded to freak out.

Endemic to the Pacific coast from Alaska to Baja California — but most abundant in British Columbia waters — ling cod are big-mouthed, feisty, bottom-dwelling fish that make for good sport and good eating.

Though typically mottled-brown red or even greyish-green with white-hued flesh, Galloway’s specimen was a shocking electric blue.

“I pulled up this ling cod and looked at his mouth. It was bright blue,” said Galloway, a professor at the University of Oregon. “I couldn't believe it and thought, ‘What the heck is this?’”

His reaction wasn’t much different to that of many recreational fishermen along the West Coast who occasionally pull up the fish that can be a neon blue — both inside and out.

Often referred to as Smurf cod or Smurf meat, in reference to the popular blue cartoon creatures, online fishing forums and chat rooms are filled with people asking if turquoise-tinted ling cod are safe to eat, or even toxic and possibly the result of mercury or nuclear radiation contamination.

But most fishermen, some who tout the fish as lucky, theorize the harmless colour occurs about 20 per cent of the time and is derived from the food the fish consume — speculating it’s the result of a particular type of crab, squid or kelp.

But really, nobody really seems to know for sure and there isn’t much science on the mystery despite it being a topic of interest and discussion by seafood workers, fishers, scientists, and naturalists for some time, Galloway said, noting his own scientific curiosity was piqued by the puzzle.

“I just found it fascinating,” he said, adding he delved into the limited literature and anecdotal reports around the extraordinary colouring and found them wanting.

A new @uoregon study unravels some of the mystery about the West Coast’s singular #SmurfCod. Researcher @awegalloway and his peers found 80 per cent of extraordinary ling cods with neon-blue flesh were female. #OceanScience

It’s generally understood that the ling cod’s blue colour is the result of a bile pigment called biliverdin, but it’s still a puzzle how it actually colours the fish and why only some are affected.

“There hadn’t been any systematic studies about this,” Galloway said. “They didn’t say why or how often it happens, so I just thought, “OK, I want to study this now.”

Early in his investigation, Galloway had a stroke of luck and connected with some scientists who had done an extensive catch survey of ling cod over long stretches of the U.S. coastline.

Involving more than 2,000 fish, the survey accumulated extensive data on the size, sex, location, depths, and luckily, the colour of the ling cod caught.

Examining the data from another angle, Galloway and his colleagues used several methods to weigh what biological or spatial factors might account for blue-coloured ling cod.

“Basically, we looked at what factors correlate with blueness,” he said, adding the findings very likely apply to ling cod in Canadian waters as well.

Have you ever wondered why some lingcod and other fishes sometimes have bright neon blue colored flesh? That's funny, so did we!! Check our new collaborative work out in @Mar_Biology today: Why so blue? 👀🐟https://t.co/XQHdVt2lij #OpenAccess pic.twitter.com/GHrYdmKHnw

The most significant and surprising find was the probability for blue flesh was highest in the females, as well as those caught in shallow water, or ones that were smaller.

The overall incidence rate of blue fish ranged from four per cent to 25 per cent depending on the region where they were caught, which supports anecdotal estimates by fishermen that one out of every five ling cod has bluish flesh, Galloway said.

However, sex was still the biggest predictor, as 80 per cent of all the blue ling cod were female, Galloway said.

Yet, blueness isn’t solely a sexual trait as a proportion of male ling cod are also blue, he noted.

While the study has completed one of the most comprehensive assessments of the prevalence and factors associated with ling cod blueness so far, outstanding mysteries remain about why the fish have their special colouring, Galloway said.

Some other research reviewed for the study examining different types of blue fish suggest the colour may provide UV protection in shallower waters, he added.

“But at this point, we don't have enough evidence for that,” Galloway said.

And while the recent study doesn’t resolve the question if a ling cod’s blue colour is the result of diet, it does offer some insights worth further exploration, he said.

So, a dietary difference in shallow waters might trigger a blue colour, compared to fish that spend most of their time in deeper habitat, he said.

“So our hypothesis, and some of the fatty acids we traced, indicate the blue fish might be starving, or going through some sort of nutritional stress,” Galloway said, adding research on other fish indicates poor diet can trigger an increase in blue bile pigments.

Ideally, experiments in a laboratory setting could explore if nutritional stress would turn a ling cod blue, Galloway said.

Or if blue fish with a good diet could turn into a more typical brownish-red.

“Or is it once (the fish) get to a state of blueness that they are locked in for the rest of their life?” he asked.

“I find that a very interesting question.”

It’s also not clear if blue ling cod are born blue and inherit the trait from parents.

“There just needs to be more work done,” Galloway said, adding there’s also more to explore around the biological mechanisms that govern blueness and any associated costs or benefits to ling cod.

“In science, we go out there and try to answer the questions,” Galloway said.

“And we do answer a lot of them, but we’ve raised a lot more.”

One article I remember

One article I remember reading about heterosexuality vs homosexuality in humans found a ratio of 81/19. When I read this article about blue ling cod I was struck by a similar ratio of color differences in the male vs females of the fish. Granted that sexuality is much more complex than the two extremes, but could their coloration be a result of some genetic variation of their DNA structure?

You left out the fact that

You left out the fact that when cooked the blue meat turns white and is just as delicious.